"War never proves who's right...only who's left," "Taxes for peace, not for war," "Another world is possible," read posters at Northampton Community 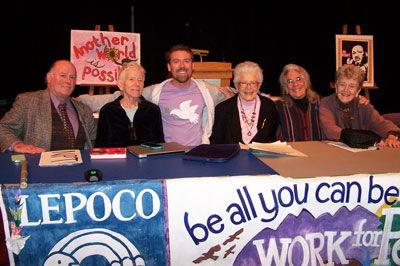 The College celebrated the fiftieth anniversary of LEPOCO (Lehigh-Pocono Committee of Concern) as part of its Sixth Annual Peace and Justice Conference.  Six members of LEPOCO participated in a panel discussion about their five decades of work.

About the organization that got started in protest against the Vietnam War, Professor of English James Von Schilling said, "To stay with it for years and years as issues changed is amazing.  There is bad news and good news.  The bad news is that LEPOCO is still needed.  The good news is that its members still have energy and commitment."  In fact, some of LEPOCO'S original activists served on the panel.

Ranging in age from young adult to ninety-one, they came to the organization via different but similar paths. Jeff Vitelli, a conscientious objector during the Vietnam War, was drawn by LEPOCO's "passion for and commitment to convert mental attitudes from war to peace."  Mimi Lang joined later in her life, in the 1980's, attracted by a "loving, spiritual community working for peace."

Evan Hoffman traces his involvement since the age of eight, when his parents brought him to meetings.  He attended LEPOCO's annual peace camp, marched against the War in Iraq, engaged with Occupy Wall Street, and participated in many other peace and social justice causes.  Nancy Tate became aware of societal injustice while growing up during the civil rights era in racially segregated Virginia.  She took part in social justice causes before LEPOCO's founding.

Susie Ravitz spoke about her concern over "perpetual war," conflicts the United States has initiated or engaged in since 2001. She decried George W. Bush's administration's false claims of weapons of mass destruction in Iraq, which led our country into war.

Fran Dreisbach, age 91, expressed concern about the United States' defense budget, which she said is far greater than that of other countries, and intentional civilian casualties, which date to the First World War.

All of the panelists told of being arrested for their actions, although their demonstrations were legally protected.   They have advocated for nuclear non-proliferation and strategic arms limitations.  Several have traveled around the world to help bring about human equality through "citizen to citizen exchanges." Delegations have traveled to Haiti, Colombia and Nicaragua.

Hoffman said about his dedication, "you can't be neutral on a moving train.  True peace is not just the absence of war, but the presence of justice."

Two LEPOCO panelists recited poetry and encouraged the audience to join them in peace activities and yearly Christmas peace pilgrimages from Bethlehem to Nazareth, Pennsylvania.

Representatives of other social justice organizations and students from some area colleges offered brochures and information at tables in the Lipkin lobby.