For Women’s History Month: A Resilient Woman in the Rugged West 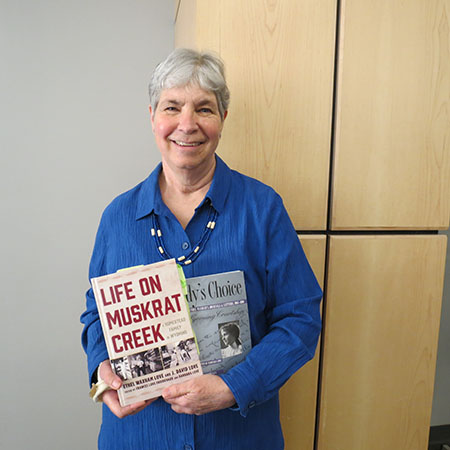 Northampton Community College (NCC) celebrated Women’s History Month on March 28 with a talk about a resilient woman.  Retired NCC faculty member Barbara Love shared the story of her grandmother Ethel Waxham Love, who chose a rugged life in the early 20th century American West.  Fortunately, Ethel wrote extensively about her experiences in journals, letters, and vignettes.  Barbara and her late sister Frances Love Froidevaux compiled and edited these writings into a book, Lady’s Choice: Ethel Waxham’s Journals and Letters, 1905-1910, published in 1993 by the University of New Mexico Press.  Life on Muskrat Creek: A Homestead Family in Wyoming, 1910-1925, followed in 2018, published by Lehigh University Press and The Rowman and Littlefield Publishing Group.

As part of her talk, Sorting Out and Weaving Together: Constructing a Family History, Barbara showed a video about her grandparents and father, excerpted from the Stephen Ives/Ken Burns’ documentary series The West. The film—as well as the books —includes remarkable photographs, some taken by Ethel herself.

Love began with her grandparents’ early lives.  Born in 1882 in Rockford, Illinois, and raised mostly in Denver, Colorado, Ethel graduated Phi Beta Kappa from Wellesley College’s class of 1905.   She spoke four languages and loved poetry and the theatre.  While still in college, she spent a summer volunteering in a settlement house on the Lower East Side of New York.

Describing her post-college life as “flat, stale and unproductive,” she answered a newspaper advertisement for teachers in Wyoming.  In 1905, this adventurous young woman alighted from a stagecoach in a lonely, nearly-unpopulated area in the center of the state.  From there, she traveled to Red Bluff Ranch, one hundred miles from the nearest railroad and visited by few people.  Lodging with the Mills family, Ethel taught in the one-room Twin Creek School, where she had seven students, ages eight to sixteen.  Yes, this was the “Wild West.”  Marks from a six-shooter riddled the door.

Born of Scottish parents, Barbara’s grandfather John Galloway Love left Nebraska for Wyoming in the early 1890s.   By 1905, he owned 11,500 sheep plus cattle and horses on his own ranch.  So successful was he, that locals called him a “muttonaire.”  He built his ranch house with wood cut and hauled from a forest 100 miles away, and moved abandoned buildings from the deserted town of Muskrat to use as other ranch buildings.

When John and Ethel met in 1905, he promptly proposed marriage.  Ethel said no.  But John would not take no for an answer.  Thus began a five-year courtship by letter, even as Ethel left Wyoming to earn a master’s degree from the University of Colorado and then teach in Wisconsin and Pueblo, Colorado.  “Wherever she went, his letters pursued her,” wrote Barbara Love.  Finally, the persistent suitor won his suit:  John and Ethel married in 1910 and went to live on his ranch, “the most remote, barren place I’d ever seen,” Ethel noted. She wrote a friend that there was "never a light but our own, never the smoke from another's fire."

The couple faced many hardships.  During their first winter, an unusually harsh one, they lost 8,000 sheep and a baby.  (They eventually had two sons and a daughter.)   In the following years, violent storms periodically flooded the ranch house, fire destroyed a ranch building, a sheep disease decimated a flock, a bank foreclosed on the Love's livestock loans, and making a profit with cattle was a yearly challenge.  “I wouldn’t blame you if you left,” John once told Ethel.   “I will never leave you,” she responded.  John hired on as a common herder and started to re-build his ranch.

During these difficult years, the family sometimes included rattlesnake meat in their menu.  When a fugitive murderer once shared their meal, he said, “I’d kill anyone who would feed me rattlesnake meat.”  Naturally, the family referred to the dish as “chicken.”

The Loves spent 37 years on the ranch, but eventually age and ill health prompted them to move to Laramie, Wyoming, where their son David and his family lived.

Ethel’s intellectual engagement never ended.  She was active in several civic organizations, promoted the League of Nations, took writing classes at the University of Wyoming, and was the first state president of the American Association of University Women (AAUW.)

John Love died in 1950 and Ethel in 1959.  Although the Love family no longer owns the ranch, it still exists, and is used for cattle grazing.

Ethel’s story lay unread in Barbara’s father’s basement for many years.  “My grandparents died when I was a young child,” Barbara said.  “My father, Ethel and John’s son David, rarely talked about the ranch.”  He did, however, in the 1970s, share Ethel’s journals with author John McPhee.  McPhee published excerpts from the journals in his book Rising from the Plains (1986) about geologist David Love.  Although readers were interested in the geology, they also wanted to know more about Ethel.

In response to this interest, Barbara and her sister compiled and edited their grandmother’s writings into Lady’s Choice. Since Lady's Choice ends with Ethel and John's marriage in 1910, readers were curious about what happened next. Life on Muskrat Creek covers the first 15 years of the couple's life together, the birth of their three children, and the eventual departure of the two oldest children for high school in 1925. Interwoven with Ethel's writing are David's remembrances of growing up on the ranch.

Barbara Love is proud of her pioneering grandparents and connects Ethel’s life to women’s long struggle for equity and recognition.  “My grandmother would be pleased to be part of Women’s History Month,” she said.  “She saw her life as a transition between the nineteenth and twentieth centuries and herself as a witness to her changing time in history.”