The problem threatens our planet.  And it's happening faster than anyone ever imagined.  But can we still do something about it in time? 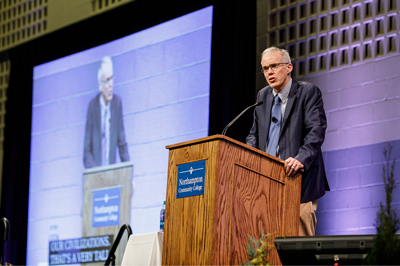 Global warming is bringing about climate change, causing record-breaking droughts, floods and other extreme weather, said Bill McKibben, the keynote speaker at Northampton Community College's sixth annual Humanities Series, held on April 19.  His topic was "Reflections on the Climate Fight."  NCC student Jenna Schlener had the honor of introducing him. The event was open and free to the community.

McKibben is the author of more than a dozen books on the environment, including The End of Nature, published in 24 languages.  His most recent book, Oil and Honey, describes his campaign against fossil fuel companies. A Schumann Distinguished Scholar in Environmental Studies at Middlebury College, McKibben was the 2013 winner of the Gandhi Prize and the Thomas Merton Prize and has honorary degrees from 18 colleges and universities.  He is also the founder of 350.org, the first planet-wide grassroots climate-change movement.  Foreign Policy named him to their inaugural list of the world's 100 most important global thinkers.

At the talk, McKibben explained that carbon dioxide released into the earth's atmosphere by fossil fuel production traps global heat, disrupting the delicate social and ecological balance that makes our planet livable.

Stating that climate change is the most difficult problem our planet faces today, McKibben recalled his first book about climate change, written thirty years ago.  "We underestimated then how fast the change was occurring and how hard it would pinch," he said.  "It is happening before our eyes in real time."  He gave examples: a chunk of ice the size of Wales is in the process of breaking away from the Antarctica's Larsen Ice Sheet.  At the North Pole, in November, temperatures measured 68 degrees higher than normal, erasing the Arctic winter.  In the South Pacific, enormous waves are wiping out coral reefs, whose biodiversity provides people with food.  Unprecedented droughts are parching farms, while violent rainstorms are sweeping land away, turning millions of farmers into refugees.  The massive displacement of people also triggers social turmoil.  According to McKibben's mentor, Dr. James Hanson of NASA, warm climates attract disease-bearing mosquitos, and scarce natural resources engender human conflict.  Climate change has the greatest impact on the world's poorest inhabitants.  Most ominous, if warming trends continue unabated, global conditions will be incompatible with civilization.

McKibben's international organization, 350, takes its name from the science of climate change: 350 ppm (parts per million) is the safe ratio of carbon dioxide to other molecules.  We are now at 400 ppm and the ratio is rising two points each year.  Average world temperatures have risen one degree Fahrenheit per year.  Seems small?  This upward trend endangers ecological, including human, stability.

"Our biggest challenge is to bring climate change under control," said McKibben, who does not believe it can be eliminated entirely.  "We have to do this so that the fabric of civilization is not destroyed."

Why then, he asked, aren't we doing more?  And why has it taken 25 years to really get going?  Scientists have been telling fossil fuel companies about climate change since the 1990s.  "The science is clear," McKibben said, "but the issue has been about money and power."  Among the richest entities, fossil energy companies understood the destructive effects of carbon emissions since the 1970s, but continue to drill while uttering denials and disseminating misinformation.

Nonetheless, McKibben sees reason for optimism. "We know what we need to do.  We must replace gas, oil and coal.  We must mobilize our engineers, as we mobilized industry during World War II." Denmark, for instance, generates half of its power from wind, he pointed out.  He believes that by 2030 we can have affordable, renewable energy by channeling wind and sun power.  The most effective way to build support for renewable energy is through organizing, he said.

His organization, 350, holds demonstrations around the world.  As slides showed, massive crowds have rallied in South Africa, China, India, Ethiopia, Somalia, Vietnam, Yemen, and many other places.  Demonstrators on the Indian Ocean Island The Maldives stood in a lagoon holding their signs.  Marshall Islanders signaled, "We are not drowning, we're fighting."  In the American Southwest, a "blanket" of blue-protesters dressed in blue-could be seen by satellite.

Standing up to climate change has been effective.  In Seattle's Puget Sound, a flotilla of kayakers persuaded Shell Oil to cancel plans for drilling in the Arctic.  The states of New York and Maryland have banned fracking.

Still, the situation is urgent.  "Our planet is way outside its comfort zone already," McKibben said.  "We don't have many years."  He believes that hundreds of years hence, historians may view reducing climate change as the most important idea invented in the 20th century.

Known for his honesty, McKibben said, "We don't know whether we can win this fight.  If we don't quickly win, we won't win."  A demonstration at the White House will be held on April 29. 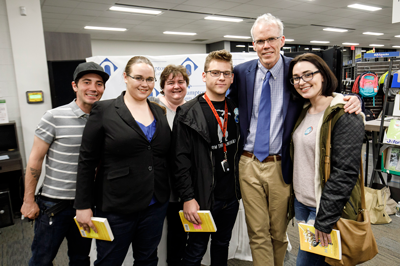 Audience members, who filled the Spartan Center, stood to applaud McKibben or clapped frequently from their seats, showing their enthusiasm for the speaker, concern about his subject and appreciation for his activism.  Several thanked McKibben for coming to NCC.  Some listeners challenged his stand, and McKibben responded calmly, objectively and informatively.

"Reflections on the Climate Fight" is the culminating event in the College's 2016-2017 Annual Humanities Series, "Flying Free: Birds and the Human Spirit" made possible by an endowment from the National Endowment for the Humanities and generous donors.  Community partners include The Bethlehem Area Public Library, Eastern Monroe Library, Bethlehem Area School District, Historic Bethlehem Museums and Sites, Stroudsburg Area School District, and Monroe County Historical Association.

View more images from McKibben's visit to NCC in this photo gallery.