NCC honored in the House and in the Senate 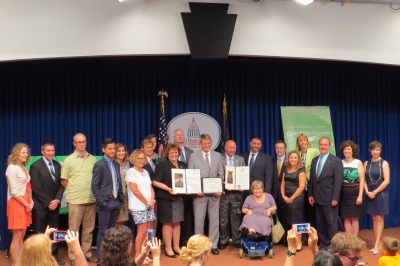 A ceremony recognizing Northampton Community College (NCC) as one of only nine colleges in the nation to receive a "Green Ribbon" award for leadership in environmental sustainability led to a good-natured fight among legislators from northeastern Pennsylvania on June 24 as they competed for the opportunity to salute the College at an event attended by top state officials including three cabinet secretaries.

"We're proud to say that our community college was one of the first honored with a Green Ribbon award," said State Representative Marcia Hahn who was chosen to speak along with State Senator Mario Scavello.

Representative Hahn arranged for Northampton to be recognized for the award on the floor of the House of Representatives and in the Senate gallery, where State Senator Lisa Boscola introduced members of the NCC delegation by name. Other legislators who were on hand for the occasion were Representatives Jack Rader and David Parker.  Green Ribbon awards are presented by the U.S. Department of Education to educational institutions that excel in reducing environmental impacts and costs, improving health and wellness, providing environmental education, and modeling environmental sustainability. Northampton was the only college in Pennsylvania to receive one.