Birds of a Feather

Do They Flock Together? 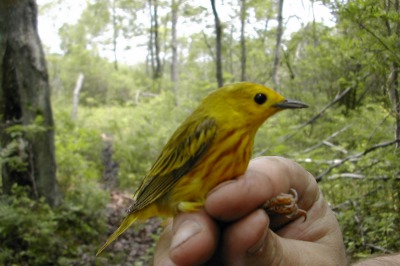 Northampton Community College (NCC) students in classes taught by Jacalyn Speicher, adjunct professor of biology, are adding to our country's knowledge of Pocono birds through two bird-banding projects.  The students' bird-banding data have been submitted to the USGS (U.S. Geological Survey) and the Institute for Bird Populations.

Bird-banding is part of ongoing research by the Pocono Avian Research Center (PARC), a non-profit organization dedicated to fostering an appreciation of native birds and their habitats through research, education and community involvement.  This activity provides information about the wintering and migratory patterns of birds.  NCC students are involved in there are two banding projects: MAPS, which monitors the breeding success and survivorship of summer resident songbirds and OWLNET, which studies the migratory patterns of our smallest owl, the northern saw-whet owl.

Over the years, dozens of NCC students in Speicher's classes have participated in these projects.  In the summer, the students focus primarily on breeding birds-thrushes, vireos, warblers, woodpeckers, and more.  In the fall, the students band northern saw-whet owls as they move through part of the Pocono area in migration.  In 2015, participants encountered 280 songbirds in three banding stations in Monroe County.

How are these studies of birds done?  Once the students have banded and taken measurements on an individual bird, it is released.  During the breeding season, many birds return to the nest in the same location as they have for many years.  Information on the birds' diversity, nest site fidelity, survivorship, and adult productivity are collected.

During the migration season, Project Owlnet is a continent-wide effort to monitor the birds' migratory patterns, interactions with their environments and population dynamics.

Angela Clements, an environmental science major, began her days of working with other volunteers at 5:30 a.m. and finished six hours later. After catching the birds in nets, she brought them back to the bird station, identified them and banded them, logging physical features so that in the future, if they were caught again, she could note any changes.

"You can pick up any bird guide and learn the physical features, breeding conditions and migratory patterns of any species, but the hands-on experience that I was given cannot be taught from a book.  Learning how to handle creatures that most of us only see from a distance was a bit difficult in the beginning.  From examining the birds, I was able to tell how fat it was, if it was breeding, the health, age, and the sex (sometimes).  It was really exciting when we got a recapture because this showed that the same small bird that was caught the year before, that flew south to Peru and back to the Poconos," Clements said.

The experience was positive for Clements in other ways as well.  "This was the first time that I worked with a group of people to learn and expand knowledge for the greater good.  I was able to meet a lot of new people who have similar interests in wildlife and the planet we live on."

PARC has published some of these data in the Wilson Journal of Ornithology.  Additionally, Clements has created a page on a website called Ebird.org, which lists any birds caught, seen or heard in the area.

NCC graduate Sharon Warburton, now a biology major at East Stroudsburg University, said "I learned a lot about bird features and learned how to do research, how important it is and how enjoyable it is."