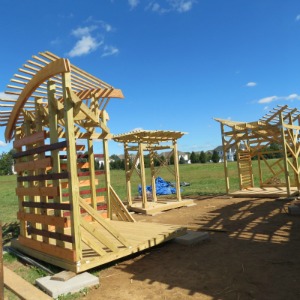 It seems something's always afoot in NCC's East 40 Community Garden. Most recently, what's afoot are footings -- the building kind -- and the student/architect-designed and -built structures that they support.

Architecture students in Ken Trionfo's second-year design class have been busy this semester dreaming up and constructing two open-air yoga studios and a hayloft in the garden. The students were divided into teams to come up with their designs and then build models of their plans. A silent ballot was held in the class to determine which projects would be greenlighted.

The hayloft is a permanent structure, where East 40 gardeners can store hay above, and performers can take advantage of an amphitheater-like stage below. The yoga studios have a central space for an instructor, and wooden flooring for yoga students' mats. These structures are made to be movable. Trionfo says they may eventually find a home in another beautiful garden on campus -- the Tribute Garden near Penn Hall.

The design students were joined in the building of the studios and hayloft by others taking structural and materials classes in the architecture program. In all, 24 students worked on the projects for several weeks, four days a week from 12:30 to 4 p.m. "When the end of class comes, they don't want to leave!" Trionfo laughs.

Student Anthony Gallucci, who has some design and building experience from high school, concurs. "I'd rather be out here than sitting in a classroom any day." 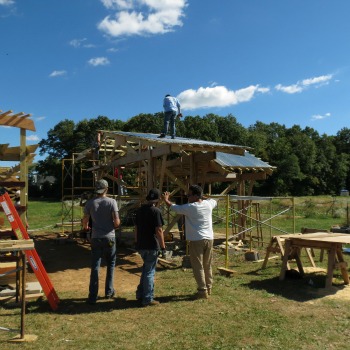 Trionfo and his students agree that the hands-on aspect of building a design to completion is an invaluable opportunity. "You can draw things all day long, but building things ... it makes such a difference," Trionfo attests.

Student Miljorie Averian says the actual construction experience is tremendous. "I've never had a chance to do this -- I'm usually inside drawing!"

Feel free to stop by the East 40 to have a look at the architecture students' handiwork. And if you're a yoga enthusiast, stay tuned -- an outdoor class in the Tribute Garden may be coming soon! 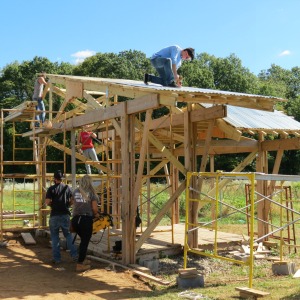