The Possibilities Mindset: Building on the Strengths of People with Autism

Temple Grandin used her autism to excel in her world. 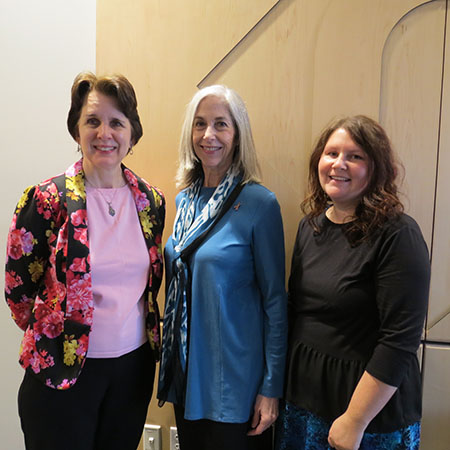 “You never get cured of autism, but you can learn more and more things,” says Dr. Temple Grandin, world-renowned animal scientist, educator and author with autism, who will speak at Northampton Community College (NCC) on April 16.  In anticipation of that visit, three NCC professors from different disciplines talked about Grandin’s book Animals in Translation and their own professional and personal experiences with children on the autism spectrum.

Animals in Translation provides insight into autism by exploring the commonalities between animals’ perception of the world and that of humans on the autism spectrum.  For instance, Grandin noticed that like many, but not all, autistic children, animals think in pictures rather than in language.

The panelists recognized in Grandin’s insights the strategies and best practices they utilize in working with autistic children and instructing future special educators.  Above all, they embrace a “possibilities mindset,” which searches for and cultivates the intensely focused interests and rare abilities children on the spectrum often possess.  “In my courses, I teach my special education majors to not look at what is wrong, but to find a child’s strengths, passions and potential and to use them. Temple Grandin used her autism to excel in her world,” Kennedy said.   Donahue gave an example from her own experience: a boy, mentally absorbed with his family’s backyard pool.  When she probed, she found that his fascination centered on the pool’s chemicals, and she envisioned him as a potential chemist.  “We can use passion as a way in,” she added.

The panelists found many aspects of Animals in Translation intriguing.  One component of autism is anxiety.  Fear usually underlies what is seen as disruptive behavior, a phenomenon Grandin discovered in frightened animals.  “What is the source of a child’s terror?” educators may ask themselves.  Grandin believes that an animal or autistic human never forgets a trauma and continues to fear its source.  A member of the audience, Tiffany Bass, an instructor of veterinary technology, noted that fear can be extinguished by gradual exposure to the thing that is dreaded.

Martin understands that new college students also contend with anxiety, entering an unfamiliar environment with schedules, classroom seating and academic language.  Many also live with personal trauma.  “We have to know where our students are coming from, the baggage they carry and how to help them unpack this baggage, so that they can feel ‘I belong here.’ ” she says.

Grandin observed that animals become agitated in distracting environments.  Her perception mirrors the care special educators make to minimize sensations that overwhelm an autistic child, such as noise and smells.

Like Grandin, the professors emphasize the importance of early intervention.  Donahue described “wrap-around” services, service at many levels, at home and in school, as essential.

In addition to content, the panelists admired Grandin’s writing for the directness and specificity that allow readers to see the world through the author’s eyes.

As a person with autism who has achieved remarkable success, Grandin is also an inspiration to others.  “Temple Grandin is a beacon of light for many children,” Donahue said.

The discussion was part of Northampton Community College’s 2018-19 humanities series, Humanities Best Friend: Dogs and the Human Saga.  NCC's NEH series is made possible by a grant from the National Endowment for the Humanities and the generous support of donors.  NCC partners with the Bethlehem Area Public Library, the Eastern Monroe Public Library, Historic Bethlehem Museums and Sites, Bethlehem Area School District, the Monroe County Historical Society, and the Stroudsburg Area School District.