Century of the Nurse

It's an important time for nursing in the 21st century 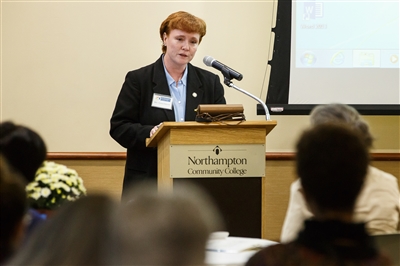 "There has never been a better time to be a nurse," said Kerry Cheever, Ph.D. professor and chairperson of the school of nursing at Moravian College, in the keynote address at the conference "Century of the Nurse," at Northampton Community College on October 6, 2017.  Stating that the present is a pivotal time for nurses, she traced earlier turning points in the profession's development.

In Colonial days, most health care occurred in the home and consisted of folk remedies applied by untrained caregivers and barber-surgeons.  After the Revolutionary War, however, modern teaching hospitals emerged, although they were viewed as a last resort for the poor, who could not afford private care.  In fact, in the time before germ theory became accepted, hospitals furthered the spread of infection. On alternate days, doctors would rotate between autopsy rooms and maternity wards.  No wonder, when they could, patients visited hospitals on no-autopsy days!

Often changes came about, Cheever pointed out, as a result of necessity during war.  "Nurses brought goodness out of horror," she said.  Florence Nightingale supervised the first military hospital, during the Crimean War of 1853-1856.  She replaced primitive, unsanitary conditions with hygiene, quiet surroundings, good air and nutritious meals.  As a result of her transformative actions, hospital mortality and morbidity rates declined from 38% to 2%.  During World War I, nurses responded to the flu pandemic by introducing the visiting nurse, who went from home to home as the epidemic killed more people than did the war.  By World War II, almost all health care took place in hospitals.   Yet, gender stereotyping prevailed, with nursing considered "women's work."

Today, Cheever said, the nursing field has become far more inclusive, with more men and members of ethnic minorities entering the profession.  Nurses' roles have also expanded. Nurse practitioners provide primary and specialized care to many thousands of patients.   Community-based nurses can be found in shopping malls, schools, places of business, and other venues.

Nevertheless, health care challenges remain.  Although the United States spends more on health care than does any other developed nation, its outcomes significantly trail those of the United Kingdom, the Netherlands and Sweden, Cheever pointed out.  To improve results, Cheever says that "nurses must be disruptive innovators like Nightingale and be agents for change."  Keys to these changes she says, will be a new, personal care model:  services anywhere, networking for transition of care from one setting to another, and customized care based on a patient's genome.

Following Cheever's talk, several speakers gave presentations.  Dina Huth, MS. CAADC, case manager for the Pennsylvania Nurse Peer Assistance Program (PNAP), discussed helping nurses impaired by addiction to opiates and alcohol.  One quarter of nurses, she said, will develop an addiction sometime during their careers.  PNAP is a voluntary, confidential program that identifies, intervenes upon, advocates for, monitors, and provides support to nurses and nursing students.

Hon. Teresa Osborne, secretary of the Pennsylvania Department of Aging, recalled an older neighbor confiding that her children wished her to enter assisted living, but she wanted to stay in her own home.  "Seniors want to age in place," Osborne observed.  "They deserve to do so with dignity and respect."  The older adult population is swiftly growing, especially the segment over eighty, she said.  With three million Baby Boomers (born between 1946 and 1964), Pennsylvania has the fourth-largest senior population in the country.  Furthermore, seventy percent of current sixty-year-olds will need supportive services sometime in their lives.    Seventy-eight percent of the cost of these services is provided through the Pennsylvania lottery, with the federal government supplying the rest, in accordance with the Older Americans Act, passed by Congress in 1965.  To enable more seniors to age in place, Osborne advocated funding programs that allow older residents to live and thrive in the communities of their choice.

"It is scary, big and coming down the road," said Lori Dierolf of Open Door Training in her talk, Baby Boomers and Their Impact on the Future of Dementia Care.  She cited the Alzheimer's Foundation that "Alzheimer's and related dementias is the sixth leading cause of death in the United States, and the only one in the top ten without a way to prevent, cure or slow its progress."  She presented staggering statistics and projections.  In 2010, dementia care cost the nation $109 billion; in 2016, $230 billion.  In 2050, the expected cost is $1.1 trillion.  Nonetheless, early diagnosis is essential because it can encourage victims to join clinical trials and can help family members' understand unusual behaviors caused by the disease.  To ease the stress of dementia on patients and their families, Dierolf recommends adult day programs and at-home care, which will soon be facilitated by telehealth devices such as robots and remote patient monitoring and GPS technology to address wandering. She also suggests active intelligence monitoring, which uses sensors to indicate a patient's well-being. Co-housing with residents of a house sharing health aide costs, dementia-friendly villages, which exist in Europe and will soon begin in this country, starting with a village in San Diego in 2018 or long-term care facilities can be helpful in this situation as well.  New technologies are also envisioned:  brain implants that stimulate cognitive areas, Google glasses with face recognition capabilities and furry animal-like robots that comfort their owners by responding to touch.

Liz Bradbury, co-founder and director of training at the Sullivan-Bradbury LGBT Community Center in Allentown, addressed providing healthcare to the transgender population. She distinguished sexual orientation from gender identity, which is "a person's inner sense of being male, female or something else."  In treating transgender people, she advised, nurses should be aware of appropriate definitions; "gender transition is the process of changing one's gender expression from one's assigned birth gender to one's gender identity.  Social transition may include changing one's gender expression via clothing, hair and documents.  Medical transition may include hormone replacement therapy, hormone suppressants and various surgeries."  Practitioners can make their offices transgender-friendly by ensuring that all staff are LGBT culturally competent, having a fully-inclusive non-discrimination statement posted and having gender neutral restrooms.  Bradbury discussed appropriate and inappropriate vocabulary when talking to or about a transgendered person.  She also talked about transgender youth and discrimination against transgender people.

As each speaker showed, dramatic advances are being made in healthcare.  The 21st century is truly the Century of the Nurse.