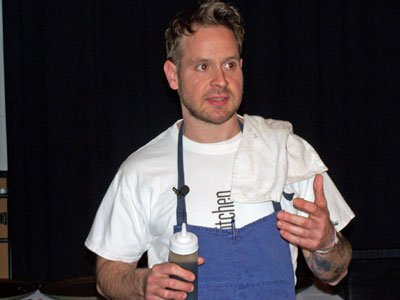 Northampton Community College's (NCC) Chef-in-Residence cooking demonstration and tasting on March 30 stood out for two reasons: it was the 30th such event, and it was the first one featuring an NCC culinary arts graduate, Jason Hook '97.

Hook climbed the ranks at several top hotel companies including the Four Seasons, Ritz Carlton, and the St. Regis, cooking in the kitchens of Alain Ducasse, Jean-Georges Vongerrichten and Christian Delouvier.  He has worked in Rhode Island, New York and Paris.  He brought his haute cuisine experience to the Lehigh Valley when he created the H20 Kitchen.

In addition to working as a chef, Hook is a food photographer, and his dramatic slides of growing vegetables and plated dishes whetted the audience's appetites before the demonstration.   He became interested in food photography when he styled food for photography for The New York Times and other prominent publications. 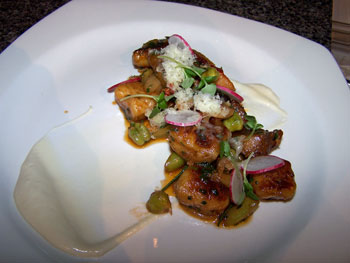 "I use my hands a lot," he said, skinning and separating parts of a whole chicken, cracking open a lobster and shaping gnocchi.  He employed cooking knives in a great variety of ways, as shown in his preparation of steak tartare, which he sliced, cut and minced into ever tinier pieces, until the meat looked ground.

His principles of cooking include plenty of texture, a balance of flavors and colors, and the use of seasonal ingredients at their peak, such as white artichokes.  He is fond of sous-vide cooking in which food is sealed in airtight plastic bags in a water bath at low temperature for long times to achieve a uniformly cooked product.  He demonstrated this technique with one version of the coq au vin, followed by the traditional method.

"I like to take a classic and cook a different version of it, tweak it," he said.  He illustrated this imaginative approach by using ricotta cheese instead of potatoes for the gnocchi and dousing the pastas in goat butter.

A reception and dinner by Hook and culinary arts students was held the following evening at the Hampton Winds Restaurant.  Proceeds benefitted the culinary arts and hospitality and management programs.

The twice-a-year Robert C. Wood Chef in Residence program is underwritten through the Wood Company Endowment within the NCC Foundation.