What was it like to be a close witness to one of the biggest and most moving events of our time? 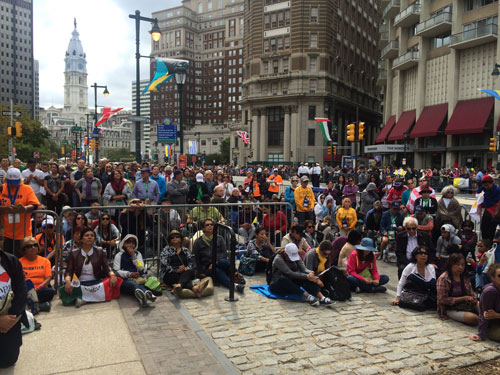 Chris Post, program manager for emergency management at Northampton Community College and a contract photographer/videographer for the Associated Press TV News, experienced such an event when he covered Pope Francis's stop in Philadelphia on the Pope's first visit to the United States.

Although Post had close access to the Pope - standing within 500 yards of the Pontiff -his greatest interest was the Pope's worldwide audience, people who had come from as far away as Cuba, Vietnam, Mexico, Guatemala, Argentina, "the four corners of the world," as Post says.  One family with four young children journeyed by bus from Argentina.  The pontiff gave the family a personal meeting.

Post walked thirty miles in three days, loaded down with camera equipment, to meet and talk to people in the crowd.

"People were very emotional," Post says.  "They were crying as the Pope came past.  They were singing and dancing.  They had been looking forward to this visit for a long time.  One man in his late forties told me that he'd been waiting for another Papal visit since his childhood.

As part of his reportage, Post got to see the behind-the-scenes work of police, firefighters and emergency medical technicians (EMTs).  Post even ran into EMTs, graduates from NCC's program, who had volunteered to be part of the support network at the event.

Having covered some tragic news, such as the Baltimore riots, the Amtrak train derailment and the New York prison break this summer, Post is grateful to have been able to report on such an uplifting and positive experience.  "Even though I am not Catholic, I feel privileged," he said.