Culinary Students Vie for Chance of a Lifetime

Winners will work in an Emeril restaurant!

Ready, set, go!  It is 8:30 in the morning, and the competition is getting hot at Northampton Community College's (NCC) culinary program kitchen. 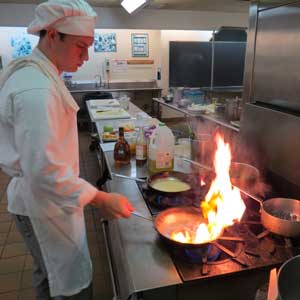 All contestants start out with mystery trays holding the same ingredients: a whole duck, a whole striped bass, chayote squash, tasso ham, baby spinach, yellow and red tomatoes, blueberries, collard greens, pioppino mushrooms, sweet potatoes, lemon, corn, and sage. Most mysterious of all?  The chayote squash.  "We threw that in for product identification, a skill they learn in class," says Susan Roth.  "It is an ingredient the students are probably not familiar with."

From these ingredients and other foods they can choose from the kitchen, John Abela, Sean O'Donnell, Justin El-Kareh, Amy Lee Miller, Billy Mushock, Elizabeth Rhoads, and Laura Namik must create prize-winning appetizers, a composed salad (one whose components are arranged rather than tossed), an entrée, and a composed dessert.  The delicious prize?  A week-long, all-expenses-paid trip to New Orleans to work in Emeril Lagasse's restaurants.

Mushock is carving into a floppy duck.  El Kareh is making a precise incision, preparing to fillet a bass.  Miller is rocking a knife over parsley with both hands as she minces the herb.  Abela is pouring cream into a jar for ice cream.  "It takes ice cream a long time to set, so I am starting with the dessert," he says. 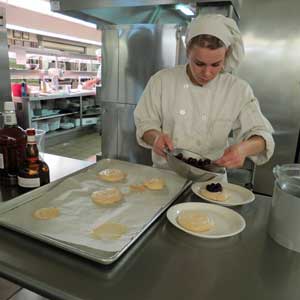 A little while later, O'Donnell is tossing collard greens in a skillet over a hearty flame, and Miller is dropping blueberry-yogurt batter into a muffin tin.

By 11:15, the judges are tasting the appetizers, including Laura Namik's striped bass spring roll with soy sauce and Elizabeth Rhoads's striped bass taco with corn salsa and sour cream.

Baby spinach forms the nucleus in all of the salads, each topped with different savory and fruity dressings, and brought out at 11:45.

Duck shows up in many guises in the entrees, accompanied by grains and vegetables, and presented at 12:30.

Dessert is at 1:00.  It is a creative array of cupcakes, tartlets, galette, and other treats.

Although the timing was tight, the contestants managed it all with aplomb.

Three winners will be announced at a cooking demonstration by Chef Chris Wilson, Emeril's home base culinary director, at the Food and Wine Festival's opening day, May 29, between 2:00 and 3:30 p.m. 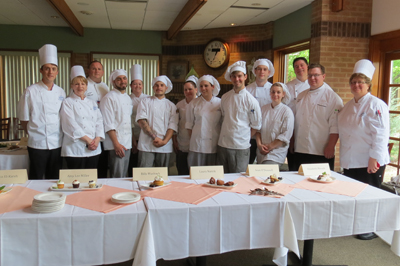 The judges were Jason Moyer and Louis Bates, of the Sands Casino Resort, and Shawn Doyle of the Savory Grill.

The previous day, hospitality management students displayed sophisticated wine skills, competing for the opportunity to work alongside chefs, sommeliers and restaurant managers in three of Lagasse's restaurants.  The contestants ( all of whom were old enough to serve alcoholic beverages) moved among stations, uncorking their ability to identify wine through blind tastings, professionally serve wine, pair food and wine, read labels, and demonstrate knowledge of grape varietals and wine trends.  They were judged on their professionalism, preparedness and knowledge.  Like the culinary contestants, the winner, Rebecca Heid, will have the opportunity for an externship at Emeril's New Orleans restaurants, all expenses paid.  The externship is being made possible through the generosity of Chris and Diane Martin.

Check out more of the action in the kitchen and photos of the finished dishes in this gallery!