St. Luke's president speaks about the future of healthcare

As this year's Hal Shaffer Executive-in-Residence at Northampton Community College's Monroe Campus, Donald Seiple, Jr., addressed a topic of great interest to many -- the future of healthcare. In welcoming him to NCC on April 6, Dr. Mark Erickson pointed out that "not only is Don Seiple the president of St. Luke's Monroe Hospital, he's also one of our distinguished and accomplished alumni."

Seiple identified cost as the number-one driver of the need for healthcare change, followed by quality. The two are linked, he explained, because while the United States is number one in healthcare spending, "we are not even in the top five for outcomes. There's definitely a disconnect there."

Seiple said France, Italy, San Marino, Andorra and Malta are the top 5 for positive healthcare outcomes, while the U.S. is 37th.

"We need to look at how we deliver healthcare. I think this really speaks to our uninsured -- maybe outcomes are better for the insured. When reforms took effect, we saw a bump in patient numbers, because more people now had insurance, and were coming to the doctor," Seiple said.

Malpractice also was cited as a driver of costs, causing doctors to over-order tests to protect themselves legally. Seiple also said there is less price competition in healthcare than other industries, and some patients forego care because of the high cost. To combat this, St. Luke's Health Network now has a Price Checker page, where potential patients can check the exact cost of the most common procedures and tests. "Transparency is very important to us - and cost does matter going forward."

Aging will play an important role in the future of healthcare, Seiple says, and aging in the Lehigh Valley could result in 16,000 more admissions a year. There will be an over 50 percent increase in the 65+ year old population in the Lehigh Valley. "Not only will there be more patients, but St. Luke's employees are retiring, so there will be a great need for healthcare professionals in the coming years."

The problem is even greater in Monroe County, which is below the state and national averages for the number of primary care providers. St. Luke's is meeting this issue by looking to the "front end" -- nursing and medical schools -- with the goal of hiring graduates in Monroe, selecting individuals who are from the area and want to live and work there. 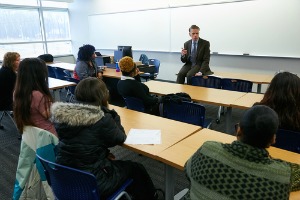 Another trend for the future will be telemedicine, which allows healthcare professionals fto evaluate, diagnose and treat patients in remote locations using telecommunications technology. "Doctors can see four or five patients by telemedicine in the hour that it would take them to drive to a remote office," Seiple explained. "It's convenient for patients, it improves outcomes by making monitoring easier, it will reduce hospital readmissions by making tele-follow-up visits possible, and improve patient satisfaction."

St. Luke's is pioneering a "Care Anywhere" app, that will allow patients to pay for a service that will enable them to use smart phone to get treatment for low-level illnesses like coughs and sore throats. The physician at the other end of the line can write prescriptions, if necessary, and the patient doesn't pay if they can't be helped -- instead they would be referred to an ER or an in-person physician.

Seiple says the entire healthcare industry is experiencing a payment model shift. Traditionally, fees were based on services; now they're value-based. For this reason, St. Luke's has a large data analytic group that looks at trends - patient satisfaction, outcomes, readmissions. "We're shifting from volume to value. Payments will be made on how well you give care."

Preventive medicine will also become more important in the future. "We have a wellness program for employees at St. Luke's," Seiple said. "We use it as a microcosm to see how we can apply it to patient populations. Teaching patients to take care of themselves and stay healthy -- I think that's where we're going."

Seiple spent a portion of the day meeting with Monroe students in their classrooms.

Begun in 1985, NCC's Executive in Residence program is funded by Jack and Cecile Shaffer in memory of their son Hal Shaffer. The program allows students to spend time with the area's most successful business leaders.