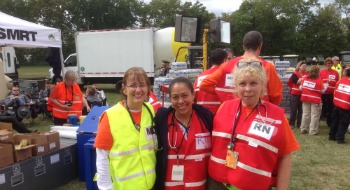 Ebullient crowds.  A once-in-a-lifetime event.  All were thrilled and excited.  But what if someone got faint or felt sick?  Not to worry; the Southeastern Pennsylvania Surge Medical Assistance Response Team had it under control, ready to help people during Pope Francis's recent visit to Philadelphia.

Marie Everhart, associate professor of nursing, belongs to SEPA SMART and volunteered to be on the team preparing for health emergencies during the Papal visit.

The team drew in about sixty experts in many fields.  First, the team erected a field hospital by inflating three large tents.  Electricians wired the tents for lighting, Specialists ran oxygen lines, put in mechanical ventilators and heart monitors.  The team members snapped the floors into place.

From Thursday until the following Monday, more than 100 patients received treatment at the field hospital.  Some had breathing problems.  Others suffered asthma attacks.  Some arrived dehydrated.  Everhart and the other medical personnel started IVs for rehydration and administered breathing treatments, among other remedies.  When a patient's complaints proved more complicated, an ambulance arrived to take them to a regular hospital.

From Thursday, when the field hospital was set up until Monday, when they were taken down, the SEPA SMART volunteers stayed at the site, 24-hours-a-day, sleeping in shifts, right in the tents. 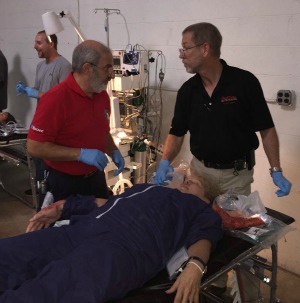 For Everhart, caring for patients during the Pope's visit was "amazing."  "I am in awe that a team of professionals who have never worked together could come together and give quality care," she says.

Now that she is back at NCC, Everhart is eager to share her experience with her students, to illustrate emergency preparedness.  She is hoping that some of her students may become interested in disaster nursing as a result.