A story of addiction and recovery

“I want to tell you about my nightmare,” said Chris Herren, former basketball star who is in his twelfth year of recovery from drug and alcohol addiction.

Herren gave a harrowing, yet hopeful, talk about his arduous path to sobriety at Northampton Community College on September 12.

For many years, spectacular athletic success rode in tandem with the struggle against a disease so powerful, it destroyed his basketball career and nearly tore away his family.  His recovery was arduous and uneven.  “You have no idea of the beast you will battle [if you become addicted],” he told an audience of student athletes and others. 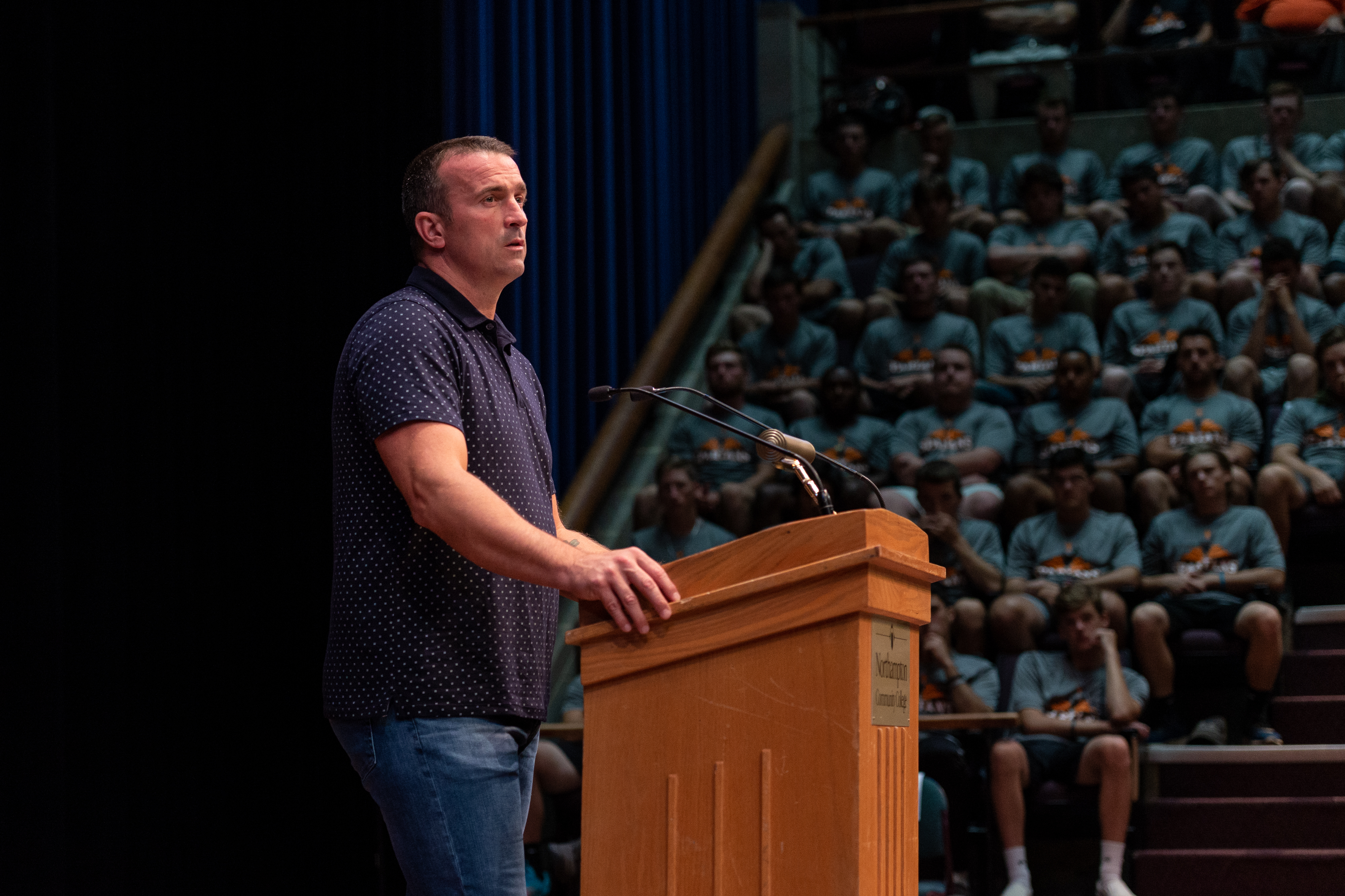 The son of an alcoholic, Herren promised his mother that he would never drink.  But a year later, he found himself in his friends’ basements, regularly consuming beer.  When at age eighteen, a Boston College roommate offered him a line of cocaine, he thought it would be his last.  It wasn’t.  “I had no idea that I’d try cocaine one time, and it would take me fourteen years to get free of it,” Herren said.

All the while, cheering crowds followed him as he moved from star player at Durfee High School in Fall River, Massachusetts, to the McDonald’s All-American team, (one of twenty players nationwide) to the National Basketball Association Denver Nuggets and, finally, to the Boston Celtics, a lifelong dream.

But drugs and alcohol trailed him too.  At age eighteen, the “Boston Globe” headlined his arrest for possession of heroin.  In his humiliation, he told himself and his mother, “I am not like those people.” Boston College expelled him after he failed a drug test.  But Coach Jerry Tarkanian of Fresno State gave him a “second chance.” After admitting drug use to his trainer, Herren completed a treatment program in Utah.   With a great season behind him and drug-free, Herren was recruited by the NBA Denver Golden Nuggets team and ultimately traded to the Boston Celtics, the team of his dreams.  He also married.

Nevertheless, an old friend knocked on his door one night: “I have a new pill for you.  You have to try it.”  Swallowing several, Herren had no idea that the little, yellow Oxycontin pills would change his life forever.  Forty milligrams turned into 1,600 and a habit costing $25,000 a month.

An injury ended his career with the Celtics, and a team in Europe recruited him.  There, Herren succumbed to a drug dealer’s offer of heroin.  Training was to be in a remote mountain area, with scarce access to drugs.  He quit and moved home once again.  At 24, he overdosed while driving, hitting the car ahead of him.  “That’s how sick we get,” he said.  “We wake up every day seeking death.  It becomes the norm to wake up chasing death.” 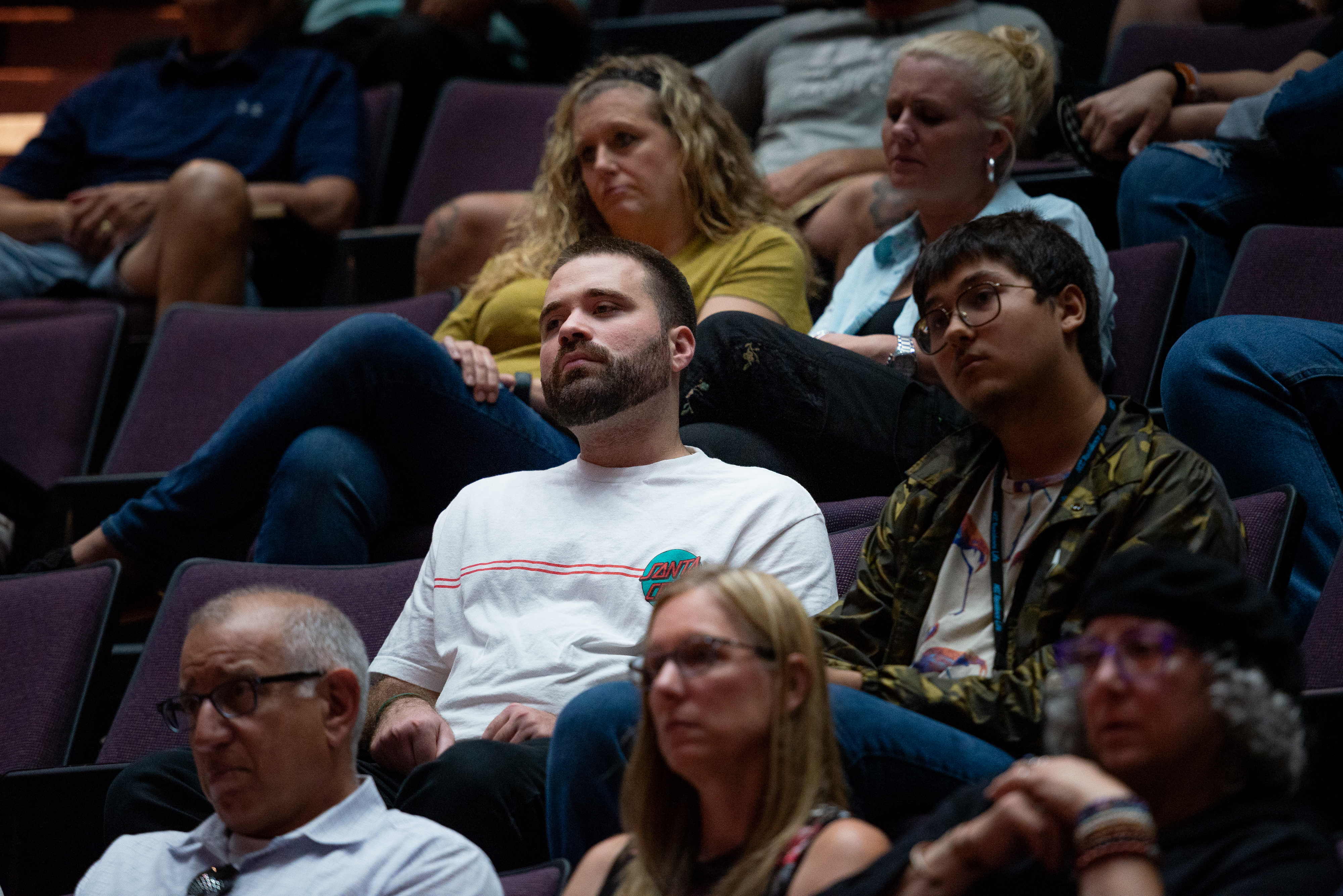 At 27, with no contracts, he earned money picking up cans for a scrap yard, and he stole from his family.  He had vodka in his system when he accepted four free bags of heroin from another old friend.  He overdosed, crashing his car into a cemetery fence.  He woke up, handcuffed, in a hospital.   A police officer removed the handcuffs, saying sadly, “when I was a little boy, I looked up to you.”  The officer urged Herren to get treatment.

A husband and father of two, Herren thought his family would be better off without him and contemplated suicide.  When a hospital nurse approached him, he waved her off.  “Don’t dare wave me off,” she said.  “Your mother went to high school with me.  Now that she has died, I am here to fill in for her.”  She arranged for him to detox.

Then, a teammate’s wife found a place for Herren in a New York therapeutic community; his wife about to give birth to a third child.  On a visit home, his son told him he had heard at school that drugs had almost killed his father.  The son told him that he loved him and did not want him to die.  Even so, when released from treatment, he headed to a liquor store and also arranged to buy heroin.  When his distraught wife vowed he would never see his children again, he returned to the New York therapeutic community.  This time, his counselor ordered him to call his wife, promise not to see her again, and have her tell his children that he had died in a car accident.  At this turning point, he thought of his mother and prayed.

He achieved sobriety on August 8, 2008.  Since then, he has traveled the country, sharing his experience with others. 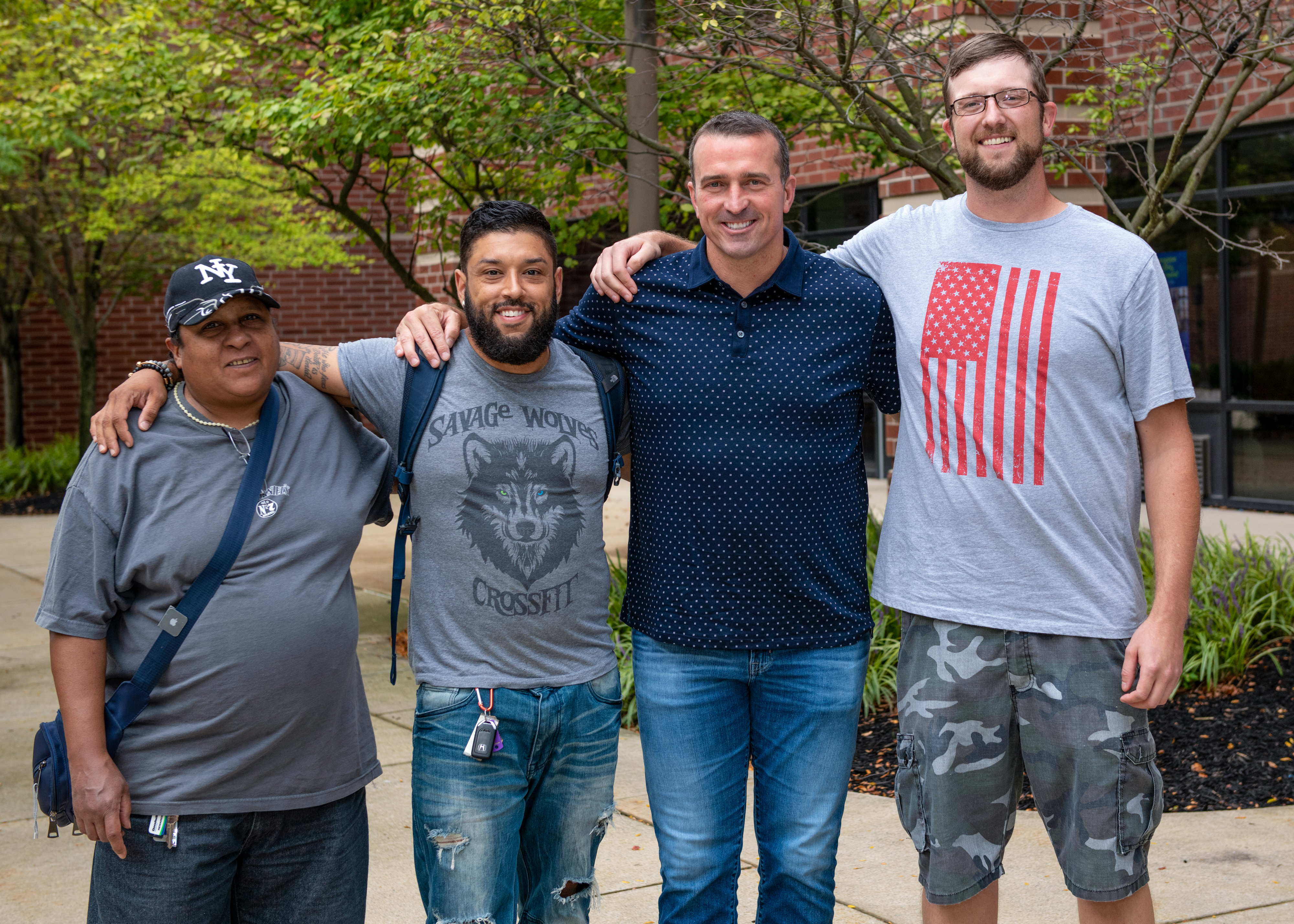 At NCC, he generously took many questions from the audience.  When asked what helps keep him sober, he credited sobriety meetings, family, friends and faith.  What can be done? a woman asked.  Herren would like to see wellness taught as a core subject in schools.  He wants parents and children to be able to communicate freely about their feelings.  Most of all, he wants conversations to begin early.  “We talk about addiction on the last day; we should talk about it on the first,” he said.  For the past eleven years, he has dedicated his life to helping others overcome the stigma and tenacity of the illness of addiction.

“It is a responsibility and honor to speak about addiction and recovery,” he said.  He has founded the Herren Project, which helps people and families who have addiction.  He has made a motivational video, “Unguarded.”

Herren’s talk was sponsored by the Northampton Community College Drug and Alcohol Task Force, with contributions from state and local organizations.