From Stealing Home to Owning the Dream

What drives you every day? 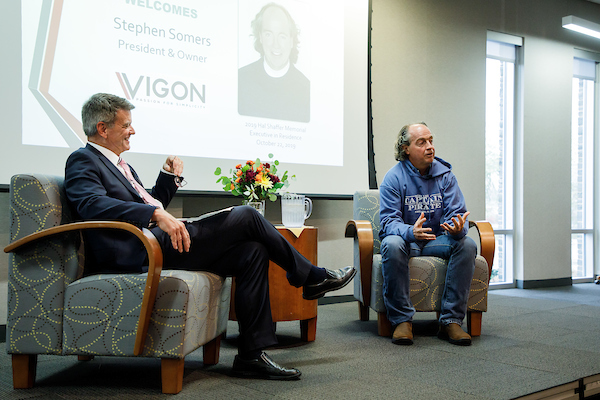 “The worst that could happen is that I fail. If that happens, I pick up the pieces, find a new job and start over,” a simple sentiment from this year’s Northampton Community College’s Hal Shaffer Memorial Executive-in-Residence, Stephen Somers, owner and president of Vigon International.

He shared what he’s learned as a business leader with a room full of students, faculty and staff at Monroe Campus during a fireside chat on October 22. His sentiment sounds easier said than done when it comes to the fear many people experience before they’re about to do something that could change the trajectory of their lives. However, Somers knew that if he continued to be afraid of jumping into his dreams, he’d always question, “What if?”, something that his father taught him not to do.

When he thinks back on his childhood, Somers can remember his father working multiple jobs to keep their family afloat. He hated them, and he always told his son to set himself up in life to be able to change jobs if he wasn’t happy with what he was doing. His dad had the opportunity to buy a business, and he didn't, worrying about what could happen if it didn’t work out. Somers found inspiration in that, which motivated his fearless high-achieving attitude throughout his life.

Growing up in Queens, New York, Somers was a high school athlete, and baseball was his sport of choice. He was an All City Baseball Champion, and it gave him the confidence to do anything. “I always liked a challenge, and I loved baseball. I stole home 18 times in my baseball career,” Somers said to the audience.

He stole home 18 times. His coach never thought he could do it, but that doubt gave him confidence to do anything.

When he stepped foot on St. Joseph’s College campus, he didn’t know what direction to take. He saw that no one was standing in line to learn about the chemistry major offered at the college. In fact, he could recall being warned never to take chemistry in college because of the difficulty. So, what did he do? He signed up to be an organic chemistry major in college. Again, he was up for the challenge.

He did well in his program and wound up going on to get his M.S. in analytical chemistry from St. John's University at night. When he landed his first gig in chemistry, he worked his way up from quality control chemist to process development chemist, eventually working with the commercial side of the fragrance and flavor business as an account manager and eventually a vice president of sales for fragrance ingredients, North America. He was sitting pretty.

When the time came to make a big decision to take ownership of Vigon International in 1998, he knew that the answer was obvious. “I had everything I needed, money, family, necessities and so forth,” Somers says, “It was about carving out a legacy for myself and following my passion and passing that on to great people.”

When he took over the company, there were eight employees working for Vigon. Five of them are still employed there. He created a company where he empowered people to do their job well. “My employees feel a part of a team that creates something special."

Vigon International, voted one of the best places to work in PA, sells over 5,000 products to 900 customers who make the flavors or fragrance combinations. “For example, a company like S. C. Johnson wants a citrus flavor for their plug-ins that will fill a room. S.C. Johnson calls a company who can produce that fragrance with the ingredients Vigon produces and sells to that company.”

When asked what makes his company and people so successful, he says out of the box thinking and commitment.

“Disrupt whatever the status quo is to do it better than what’s currently on the market. Find great people who believe in the process and have a good attitude. Those people want to be successful for themselves and their company. The toughest part of my job was thinking that I could make someone into something they aren't. Not everyone is open to discipline and motivation--- and that’s what you need in this and any business.”

Somers told the students one big thing to keep in mind when they interview for a job. “Potential employees who send me an immediate follow-up email after an interview and ones who contact me if they haven’t heard from me in a few days, those are the top things I can emphasize that will send a signal to your potential employer that you really want that job.” 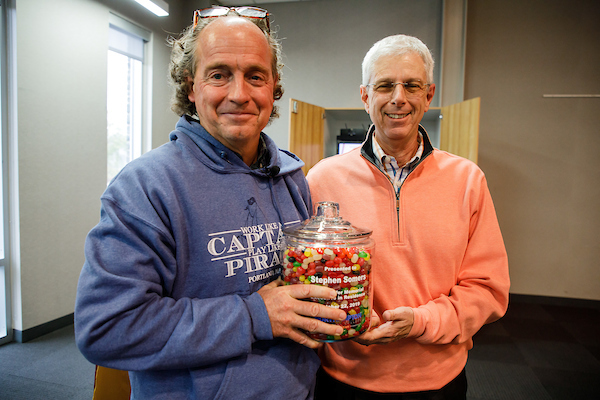 At the end of the talk, Somers was presented with a gift for coming to speak at the college, a jellybean jar from David Shaffer of Just Born who sponsors the Hal Shaffer Memorial Executive-in-Residence.

Somers left everyone with one last thought, "It took me 37 years to live out my dreams. Young people, if I could share one thing it is to keep going. The worst thing is unrealized potential.”