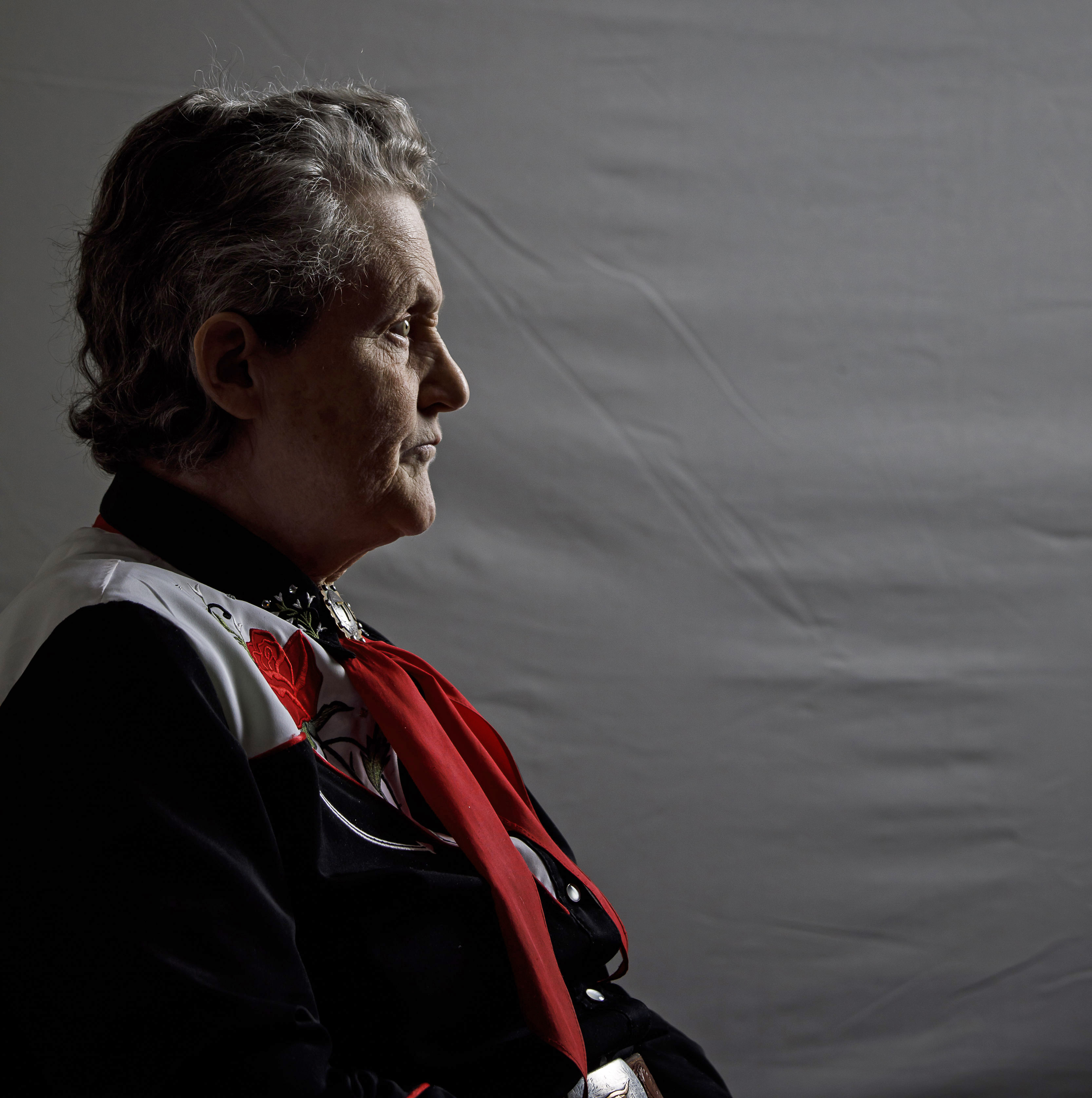 Temple Grandin is a puzzle of humanity, a contradiction to our times, a living, breathing, in-the-flesh paradox.

Once named to Time magazine’s list of the 100 most influential people in the world, an Emmy award-winning movie chronicled her rise to fame.

An acclaimed author and inventor, she lectures around the world to sold-out crowds.

She’s an expert in animal behavior and an in-demand consultant to the livestock industry.

Yet there are other words that have been used to describe her: Autistic. Savant. Disabled. Abnormal. Socially deficit. High-functioning. 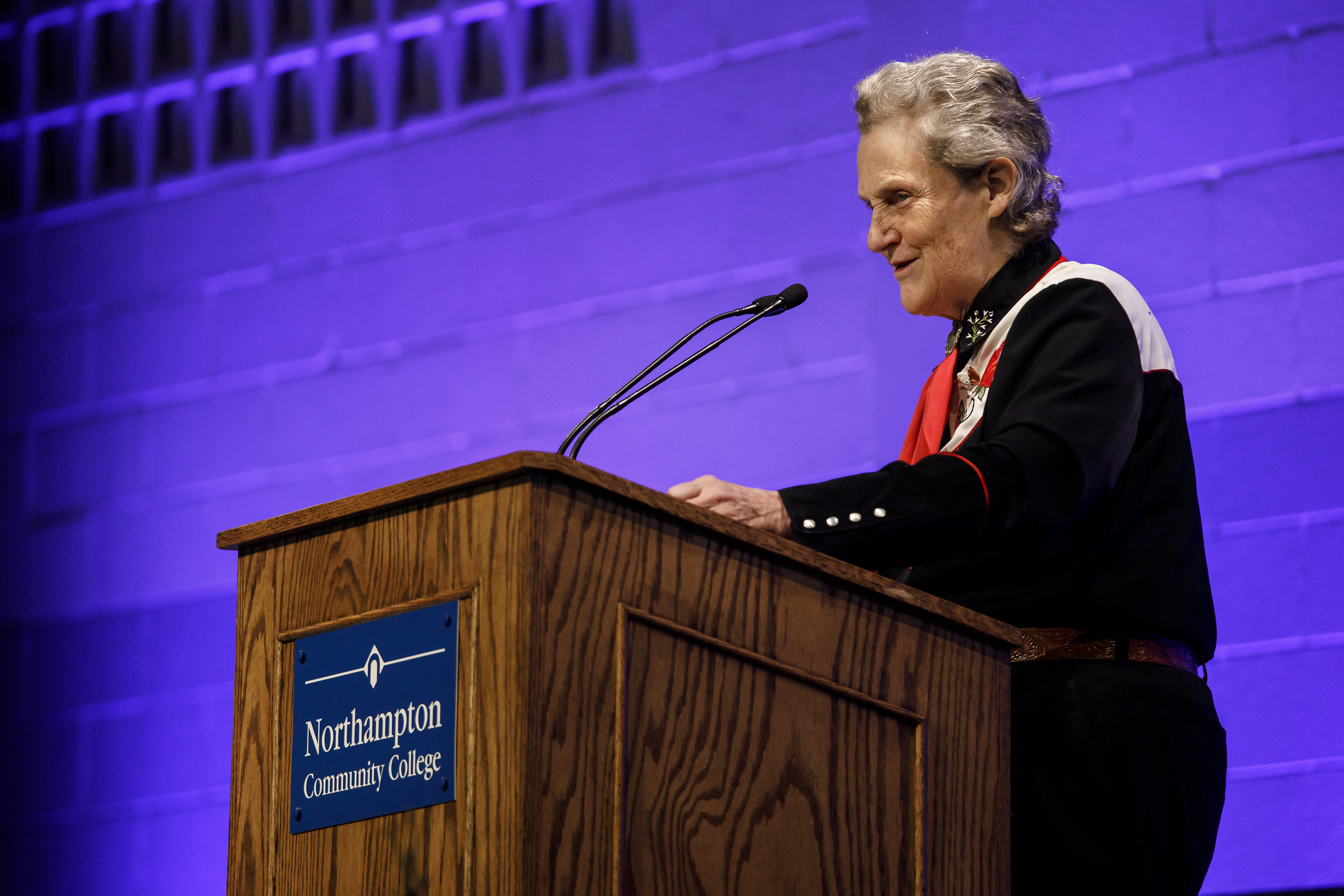 With her bright red kerchief necktie, bejeweled black shirt, leather belt and boots, the professor from Colorado State was easy to spot during her recent visit to NCC, one of three speaking engagements she had that week.

This wasn’t just any guest from the West. It was Temple Grandin. THE Temple Grandin, internationally renowned inventor, educator, consultant and author, who by the way, has autism.

Listening to Grandin speak, it is hard to believe she was non-verbal until age 3 ½. She was also hypersensitive to touch and noise. To calm herself when she was young, she rocked. She spun. As a teen, she invented a “squeeze machine” or hug box that brings calming comfort to hypersensitive autistics.

Other kids thought she was weird. She had trouble relating to people. Reading social cues still does not come easily, but her insights into animal behavior have revolutionized the design of livestock handling systems around the world.

“Everything I think about is a picture,” she explains. “Give me a word that is not something in this room and not something common,” she commands. We’re in the Lehigh Valley. You say “cement.”

Not much was known about autism when Grandin was born in 1947. When her development lagged other children’s, a doctor suggested her parents put her in an institution. Instead, her mother took her to a neurologist who recommended speech therapy. Her mother made sure she got it starting at age 2 ½.

She also kept Temple busy at home, not allowing her to withdraw from family activities and requiring that she serve as a hostess, welcoming guests who came to the house even though social skills did not come naturally to her.

“My mother always knew just how to push me to stretch me just outside my comfort zone,” Grandin says. 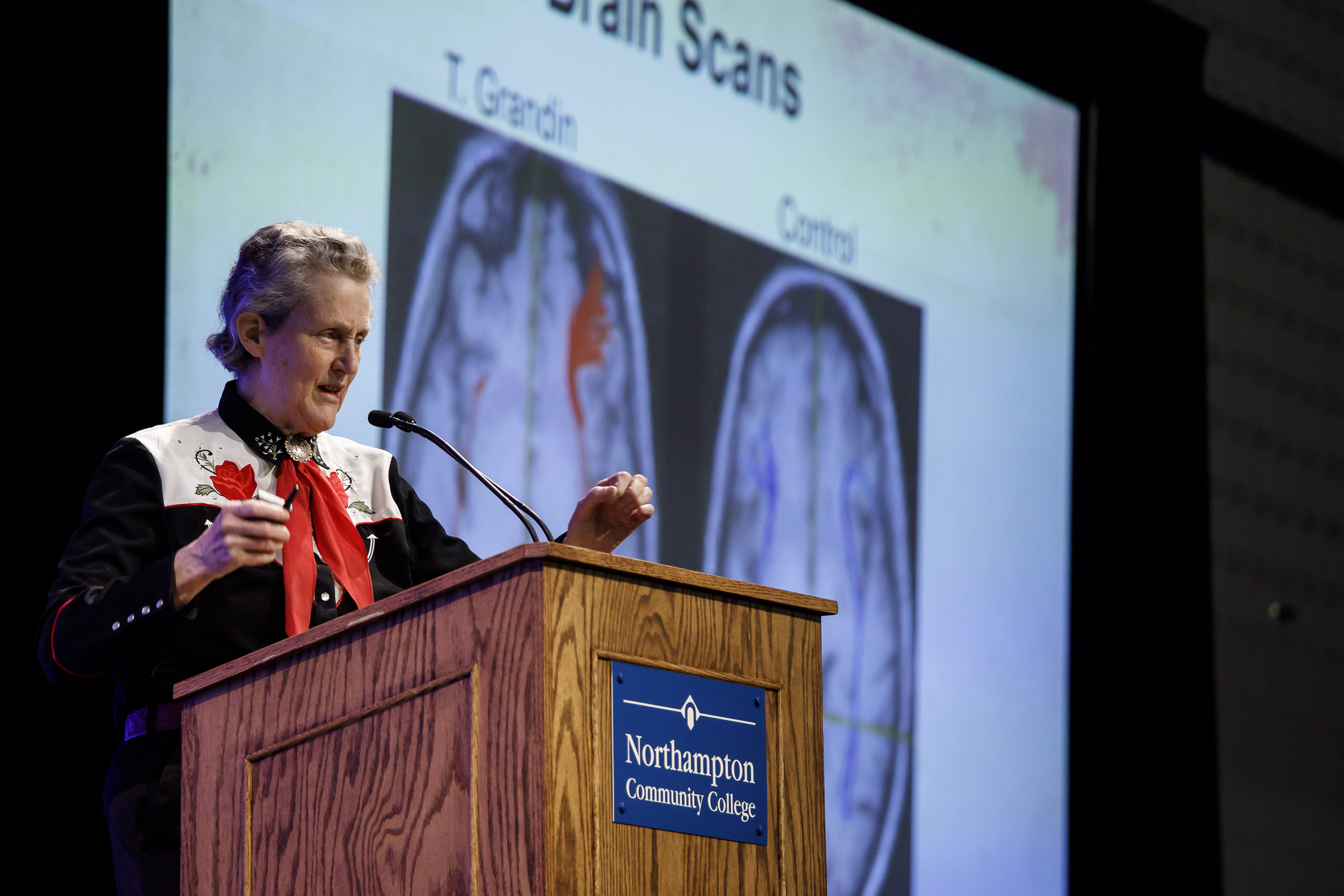 Although she was diagnosed as brain damaged, Grandin attended a local school until the age of 14, when she got expelled for throwing a book at a classmate who was tormenting her. Her mother found a boarding school for children with emotional problems that would accept her.

There a teacher named Mr. Carlock found a way to motivate her. If she wanted to learn why her “squeeze machine” brought relief from anxiety, she should study science, he told her. Carlock was a scientist. He had worked with NASA. Now he launched Grandin on a trajectory that led to success.

Similar goals are not realistic for everyone with autism, says Grandin. “Autism is not a disease like tuberculous where you either have it or you don’t,” she explains. Instead it is a continuum. “At one end is a person who has mild sensory oversensitivity problems, and at the other end is the low-functioning person who receives jumbled inaccurate information both visually and aurally.”

Grandin believes early intervention (such as the speech therapy she received) is important for many children with autism. So is learning basic life skills like cooking, doing laundry, grocery shopping, and ordering food in restaurants. “I’m seeing too many kids who are getting babied.”

Around age 11, youngsters who are verbal should “start learning how to do a job on a schedule outside the home. Dog walking for the neighbors. Washing cars. All kinds of volunteer jobs outside the home where the family is not boss. Somebody else is boss. Learning how to work. I can’t emphasize that enough.”

Using herself as an example, Grandin continues, “Students get interested in stuff they get exposed to.” She was a city girl, born and raised in Boston. She didn’t expect spending a summer on her aunt’s ranch as a teenager to lead to a career, but it did.

It is a field in which she has excelled. In addition to designing equipment to minimize the use of force in handling livestock around the world, she also developed a five-step numerical scoring system as an objective way to assess the treatment of animals in meat-packing plants.

“That is probably what made the biggest difference” in the way animals are treated, she says. Although some have criticized her for her involvement with slaughterhouses, she views her work as reducing suffering.

In achieving that goal, she believes her unusual way of thinking and her hypersensitivity to noise have been an asset because she is able to “see” what animals see and to address their fear of reflections, chains hanging down, vehicles parked along a fence and disturbing sounds.

The world can benefit from people who think in different ways, Grandin insists, pointing to “the Boeing mess” and the meltdown at the Fugishima nuclear plant in Japan. She believes both disasters might have been averted if visual thinkers had been involved. Visual thinkers can “see risk” in ways that engineers and mathematicians sometimes can’t, she contends. 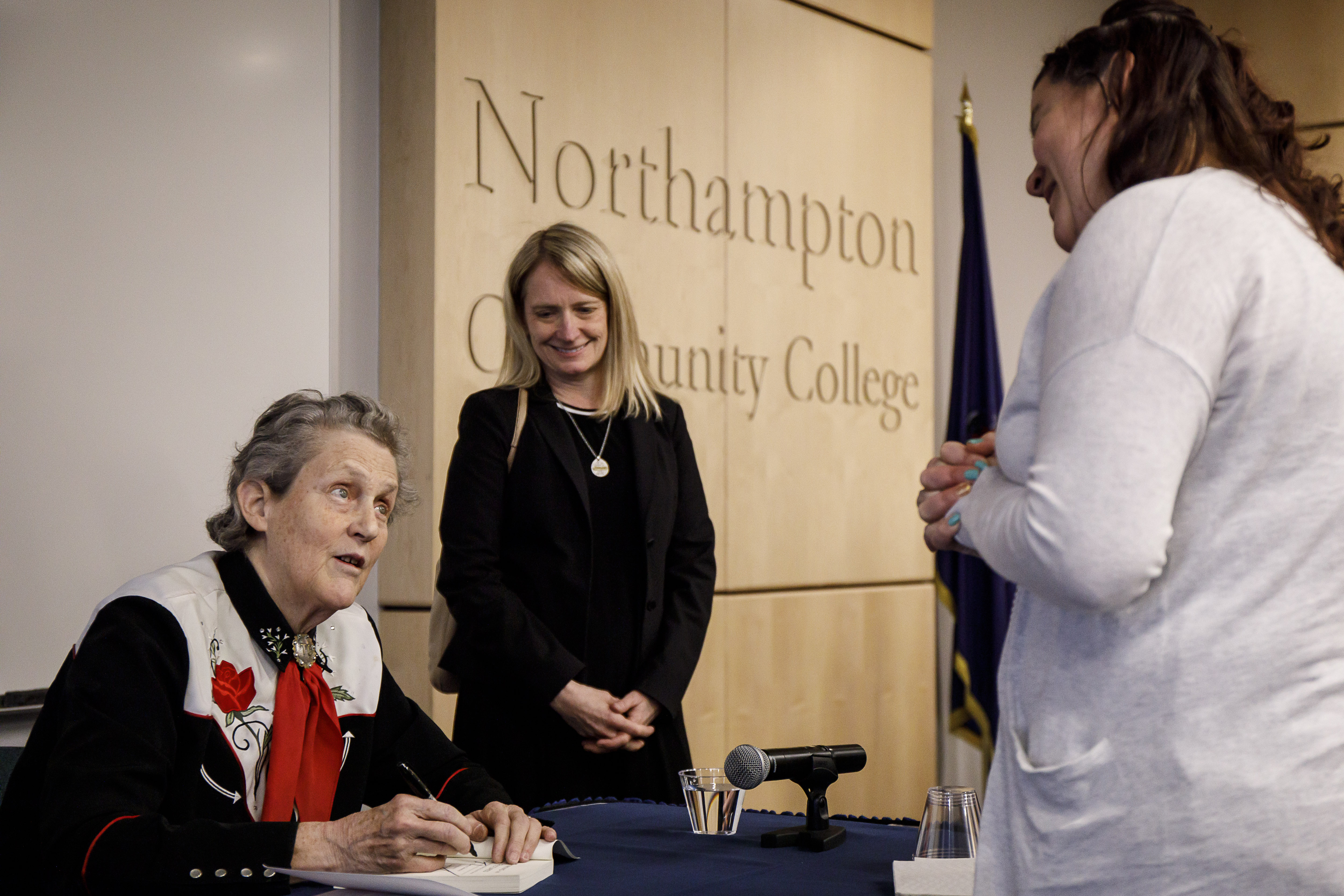 Over the years, Grandin has become better known for speaking and writing about autism than for revolutionizing cattle handling, but she views animal science as her main career. It worries her when young people with autism view the condition as their primary identity.

“Half of the programmers in Silicon Valley are on the spectrum, but they avoid the autism label,” she points out. “Business comes first. Young kids get a label, and they get a handicap mentality.”

Asked if she believes in a soul and life after death, she gets a faraway look in her eyes. “I’m seeing a picture of the Hubble Deep Space Field that I got from NASA,” she reports. “It shows hundreds of galaxies in space. When I think about the great unknowns, that’s what I think about.

“My generation did something really great with the space program,” she says. “Why do we build something like the Hubble telescope? It’s the urge to explore. You want to know.”

The Wild Mouse ride is coming to an end. We’ve been traveling at the speed of light. From cement to “the Boeing mess” to outer space and eternity, what a fascinating ride it’s been! 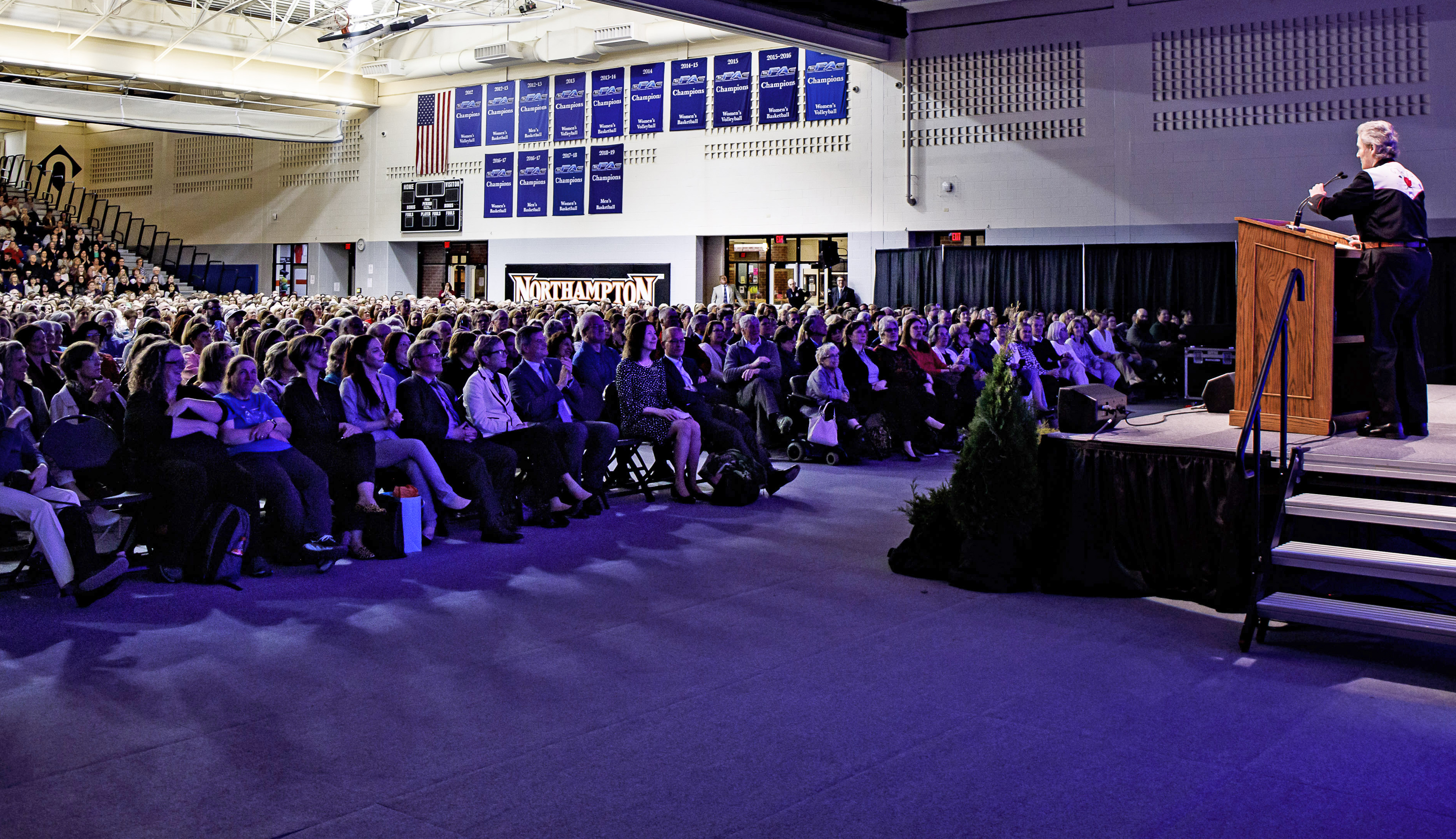