India on the Social Entrepreneurship Map 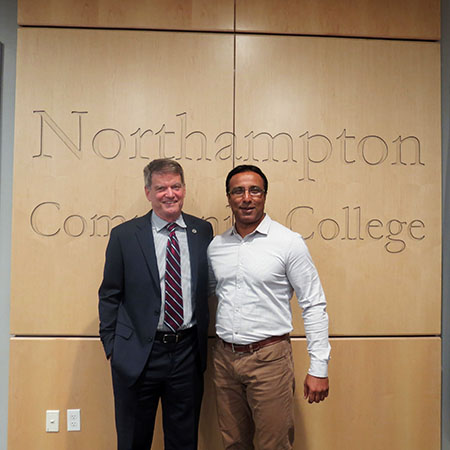 “India is on the move,” said Northampton Community College (NCC) President Mark Erickson at a talk given with Raja Bhattacharya, director of NCC’s Center for Innovation and Entrepreneurship, on October 3, at the Bethlehem Campus.

Just returned from a visit to Chennai, Pondicherry, and Cuddalore, in South India, the two administrators talked about their exploration of the potential for interactions between the College and Indian institutions engaged in social entrepreneurship. (Not coincidentally, social entrepreneurship is this year’s National Endowment for the Humanities theme.)  First, they shared some facts and impressions.

India is a country of great contrasts, Erickson and Bhattacharya pointed out.  While it has the second-largest population of billionaires in the world, it also has profound poverty, with a per capita income of $1,670.  One-third the size of the United States, India contains great diversity, especially in regards to religion.  Although most people are Hindu, there is also a large Muslim contingent, as well as representatives of other faiths.

Erickson and Bhattacharya presented other facts about India:

Erickson noted and illustrated with slides, the tremendous impression India made on him: vibrant colors, intense flavors and enormous crowds, in vehicles, riding bicycles, on foot, and going about their daily lives.

In line with their search for social entrepreneurial connections between NCC and India, the administrators visited several institutions that assist poor people: Sevalaya, which addresses issues caused by extreme poverty such as child absenteeism from school and alcoholism among men by providing free education and healthcare for all villagers; Aravind Eye Hospital, which prevents needless blindness by offering cataract surgery, a rarity in India; Satya, which helps 20 million children with special needs and offering telemedicine for patients in remote areas;  Meenakshi Mission Hospital, devoted to treating kidney disease and operating on cleft palates; and Women Run Commission on Micro-Finance, which helps abused women start their own  businesses and cooperatives through a loan.  Payback rates have been 100%.

Erickson and Battarchaya see many possibilities for students, faculty and administrators in various NCC programs to get involved with social entrepreneurship in India.

“This was a trip of a lifetime, a chance to consider what we can do and how we can connect.” Erickson said. “In Indians, we saw the passion to change their world, to do so much with so little.”