Meet the Newest Member of the Cleveland Indians

He is NCC's own Angel Lopez! 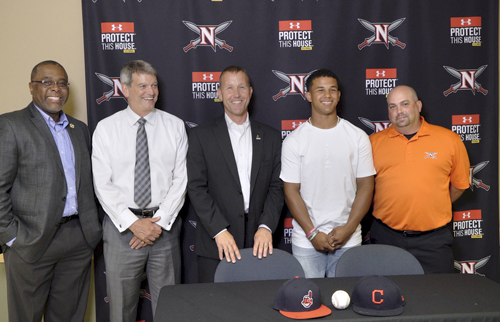 Northampton Community College (NCC) student-athlete Angel Lopez was chosen in the thirteenth round of the Major League Baseball draft on June 14, 2017, by the Cleveland Indians. The stand-out catcher, who is a two-time EPAC Player of the Year and two-time First Team All-Region selection, was the 402nd pick of the draft.

Lopez signed his pro contract with the Cleveland Indians on June 20 in the Spartan Center at the Bethlehem Campus.

"I'm so excited right now," Lopez, a business administration major, said. "My parents and Coach Yaguez [Adrian, of NCC's baseball team] always supported me. Coach drafted me when I was a senior at Perkiomen School. He is a great guy and he is one of the people who really believed I could make it." 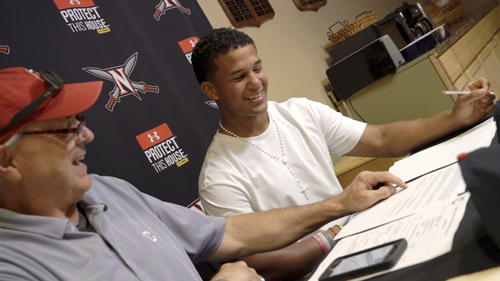 Bob Mayer, a scout with the Cleveland Indians, brought the contract to campus for Lopez to sign surrounded by his parents, his coach, and the faculty and staff who were a part of his NCC journey.

"I've heard nothing but praise about what type of human he is," Mayer said. "The off-field player has to be as good as the on-field player. We're proud to have you."

Lopez headed off the very next day to begin his career in Arizona.

Check out a video interview with Angel and photos and videos from the contract signing in this gallery.