Brian Fox was nervous, but he was more excited than afraid.  The general studies major was attending an upscale reception and dinner at Northampton Community 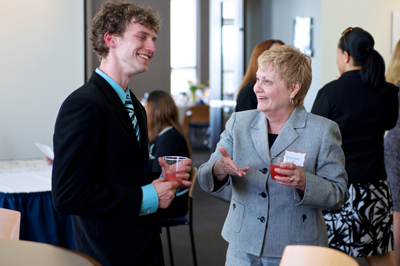 The "Mocktails" event gives students the opportunity to learn how to make a good impression when mingling and dining with prospective employers or clients.  More than fifty students participated in the event held on April 28 in Keystone Hall.  They had the opportunity to meet with both large and small employers from the Monroe area, including representatives of A Sound Strategy, C. F. Martin & Company,  ESSA Bank & Trust, the Pennsylvania State Credit Union,  Pocono Pro Foods, Sanofi Pasteur and Shawnee on the Delaware Resort, some of whom were looking for interns and potential employees.

Fox knows networking will be important to his career after he completes his associate degree, goes on for a bachelor's in management or finance, and then works for a corporation or a hedge fund.  It will also be important in his second career.  After he retires from business, he hopes to run for office to use the experience he's gained for the public good.

Biology major Shabbir Lageli is looking forward to a career in medicine.  He saw the Mocktails event as a chance to "make great contacts" and also develop "social skills that could last a lifetime."  He was thrilled to be seated with John Alexander, a vice president at Sanofi Pasteur, at dinner. 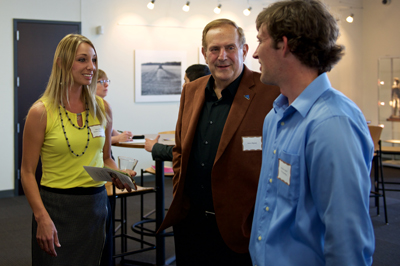 Karen Britt, the associate professor of business, who organized "Mocktails," had students well prepared.  Impeccably dressed, most made sure to circulate at the reception, talking to as many employers as possible, beginning the conversations with a friendly hello and a firm handshake.  Nicole Campos seemed well on her way to success in international business as she addressed people by name, quickly forging a personal connection.

During a four-course dinner following the reception,  Bob Meyer, the general manager of Sodexo food service at Northampton drew on his thirty years of experience in the hospitality field to coach students in the fine points of business dining - from which fork to use when, to what not to order to avoid embarrassment.  You'll find some of his advice here.

Keynote speaker Robert Howell, the general manager of Shawnee on the Delaware Resort, told students that U.S. Department of Labor statistics show that 70% of jobs are found not through ads, but through networking.  "People do business with people they know," he said, encouraging students to look on time spent networking as "an investment."  You can find his tips for success here.

The reception and dinner were funded in part by the generosity of Trudi and Bruce Denlinger and by the PPL Corporation.

Members of the Business Leaders Club helped plan and staff the event.  They surprised Britt - their professor and advisor,  with a certificate of appreciation for excellence and inspiration.  Lindsey Ruggiero, a business administration major who will graduate in May, spoke on behalf of the students.