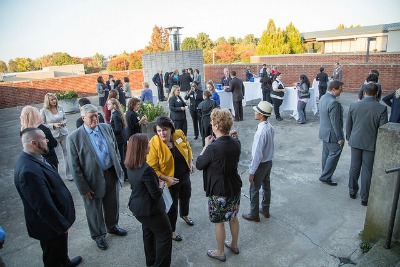 It looked like a corporate cocktail party on the patio of the David A. Reed Room in College Center on Tuesday evening, October 18. As the sun set on an unseasonably warm day, impeccably dressed guests mingled and chatted, drinks in hand, while uniformed servers circulated with savory finger foods. But the cocktails were actually "mocktails," for which the event is named, and most of the guests were NCC students.

The Mocktails Networking and Etiquette Dinner, held a few times a year at both Bethlehem and Monroe Campuses, offers students an opportunity to hone their business meet-and-greet skills as they chat with business professionals who might also be potential employers one day. Over 10 area companies were represented, including Victaulic, J.G. Petrucci, St. Luke's, Wells Fargo, Buckno Lisicky, D'Huy Engineering, Sanofi and more.

"I'm hoping to learn some networking skills, to make some contacts, and maybe get better at doing that with not so much stage fright," said psychology/English major Annisa Muqtadir. She hopes to work in student conduct or counseling in a college setting after getting a bachelor's degree.

The "mocktail" hour was followed by a four-course etiquette dinner, during which Bob Meyer, general manager of Sodexo food service at Northampton, drew on his 30 years of experience in the hospitality field to coach students in the fine points of business dining. Keynote speaker George Wacker, owner of the popular Lehigh Valley with Love media company, spoke about the importance of social media in the hiring process.

The event was sponsored by the NCC Alumni Association and the Business & Technology program. 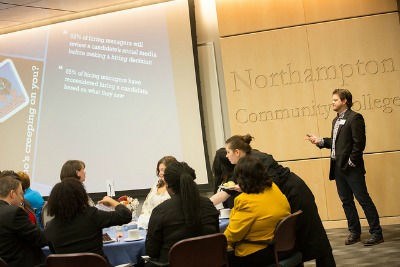 See photos of the event here.