NCC Alumnus to Have Article Published in Academic Journal

Discovering the writer and scholar within 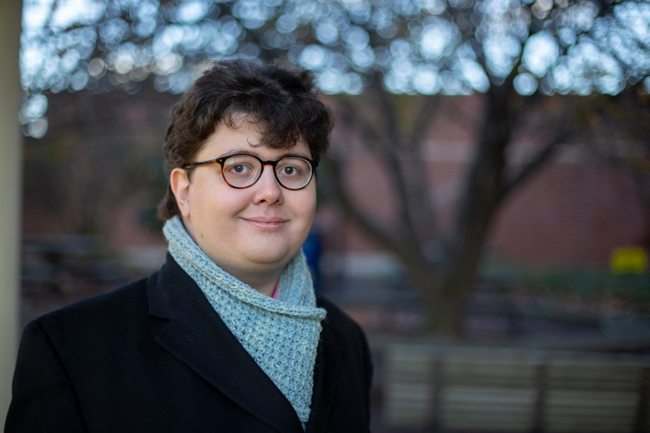 As is often the case when students first enter college, Christopher Shosted doubted his potential.  “I didn’t think I was smart,” he says. He has certainly proved himself wrong!

The young man who entered NCC in January 2016, graduated in May 2018 and transferred to Moravian College, is creating a constellation of successes.  In addition to other stellar accomplishments, Shosted has had an article accepted by Xchanges, an academic journal published twice a year, one at the undergraduate level and the other at the graduate-student level.  The editors are full-fledged academics from around the country.

Shosted’s article “PragerU as Genre: How Ideologies Typify Speech” is especially relevant to today’s issues of distinguishing fact from misinformation.  PragerU, a right-wing YouTube series, “is targeted to young college students, presents gross misinformation, and is out to dupe people,” says Shosted.  “This kind of misrepresentation is a greater and greater feature of modern discourse.  I wanted to demonstrate how this kind of communication is problematic.”

The young author wrote his article in a class at Moravian College, Rhetoric and Everyday Life, taught by Dr. Crystal Fodrey, who urged him to submit it for publication.  Sent in July, it was accepted in mid-October.  Shosted had discovered his niche: academic writing related to issues of social justice.

His writing and scholarly journey began at NCC, which he attended from January 2016 through Spring 2018.  In English 101, Professor Scott Zimmerman recognized that Shosted had a remarkable talent for writing.  Encouraged, Shosted joined the staff of The Commuter, NCC’s student newspaper, eventually becoming editor-in-chief.  A liberal arts major with a concentration in English, he earned a place in the Phi Theta Kappa academic honor society.  He also gained acceptance into NCC’s honors program, taking the honors classes Intro to Psychology, Contemporary Biology, Applied Ethics, and Irish Literature.  Upon graduation, with a 4.0 GPA, he received the Liberal Arts Award and the Keystone Press Award from the Pennsylvania Newsmedia Association for his review of the NCC production of Hair.

“Honors classes challenged me in an exciting way, gave me a chance to engage with topics I would not have engaged with otherwise,” Shosted says.  “The program allowed me to distinguish myself, and I appreciate the opportunity.”  He adds that community college is what you make of it.  There are many wonderful opportunities, but students have to reach out for them.

“I had the pleasure of having Christopher in my Honors Irish Literature course, and he immediately distinguished himself as a serious student and impressive scholar in his own right,” says Professor Cara McClintock-Walsh.  She said that the acceptance of his article for publication demonstrates his exceptional intellectual capabilities.

Shosted also enjoyed the diversity NCC offers – “both the variety of professors and the socio-economic groups striving to improve their lives and achieve upward mobility is beautiful.”   He also appreciated having non-traditional classmates, whose life experiences added to his knowledge.

One reason he values the College’s diversity is that he comes from of a bi-cultural background himself.   His father descends from white Latter-day Saint pioneers in Utah; his mother is from the Dominican Republic.  His mixed heritage has given him a double consciousness, he says.  “I am half white and half Latino.  I do not necessarily belong to either group, but I am able to relate to both.”  Born in Utah, but a resident of a poor Allentown neighborhood since age twelve, he has seen his parents’ struggles.  Throughout their own economic and health difficulties, however, they have been supportive of his education.  From his early years, they emphasized reading as an essential way to learn about other things.  Shosted says that his passion for social justice and marginalized people comes from his family’s hardships.  An only child, he has as one of his goals lifting his parents out of poverty.

After a discouraging high school experience, including a teacher belittling his academic aspirations, he withdrew from school, earning a GED instead.  At NCC, he regained his confidence.  “I discovered not only that I could do it, but that I could thrive. NCC cemented my identity,” he says.  In addition to Professor Zimmerman, he names professors Rob Hays and Cara McClintock-Walsh as especially inspiring.

Now, at Moravian College, where he is majoring in English with a writing arts certificate, he is a writing fellow, mentoring a class, Introduction to Writing Studies; helping professors to further students’ learning outcomes; giving lectures; and holding workshops.  He also is a writing tutor and an intern with the widely-disseminated magazine Eat This, Not That! that has a satellite office on the Moravian Campus.  As he did at NCC, Shosted maintains a 4.0 GPA at Moravian.

For his honors thesis, he is continuing his research into media and how they interact with and impact society.  For this project, he is examining the rhetoric of the online discussion venue Reddit’s perspective on the healthcare debate.  His work involves qualitative data analysis of the terms used and how ideology is manifested in the community’s discourse.

He admires the entire English Department at Moravian, and finds professors Meg Mikovits and Crystal Fodrey particularly helpful.  He will be working on an independent study course, focusing on writing pedagogy, with Professor Mikovits.  “Every professor at Moravian has been nothing but kind and supportive toward me and my peers,” he says.

In addition to his fascination with media, Shosted loves to cook.  His specialties are fried chicken and homemade pizza.

About to graduate this spring, Shosted plans to further his education through the master’s and PhD degrees and to teach at the college level.   “I want to take my research and share it with others,” he says.  “I want to show why rhetoric has an effect on how we live and how power is shared.  What does rhetoric tell us about people pushed to the margins?  Literature also teaches us why issues matter and how they can benefit society.”

He looks forward with great excitement to his article being published later this year.   “It is gratifying that this is happening after I worked and worked and worked as a college student.  It gives me validation and says I am finally breaking through, the first step to building a career.”

And what a career that will be!