Just call us NAC -- you already do, anyway! 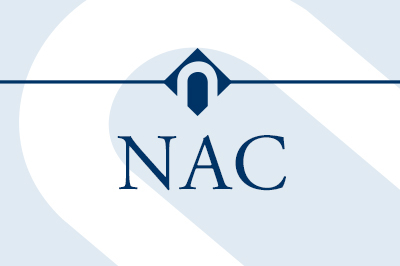 When the doors to the College first opened on October 2, 1967, our institution was called Northampton County Area Community College (NCACC).  The vision to serve a larger community and not just those living in Northampton County was reflected in the mission of the founding board members who envisioned Northampton as "a major educational resource for the total community."

The next forty-eight years would see the College expand to continue serving its community and surrounding areas. In addition to the Bethlehem Campus, we now have a campus in Monroe, a center on the south side of Bethlehem, and a center serving Pike and Wayne county residents.

Yet the acronym "NAC" persists. Legend says that the first variation of "NACKACK" was uttered at a reception in 1968 by a faculty spouse, who found the original college name too cumbersome. It was shortened even further to "NAC" by students who have been referring to the College as that ever since. To this day, high school students can be overheard saying, "Where are you going to college?" "I'm going to NAC!"

The College tried promoting the use of NCC and Northampton on its web site, various publications and social media channels, to little avail. NAC has stuck.

"If you can't beat them, join them," Dr. Mark Erickson, president of NAC announced. "Which is why we are officially changing the name of the College to NAC. Not Northampton County Area Community College. Not NCACC. We're embracing our past by going full-on NAC."

The Athletics Department is also welcoming the change. "We respect the College's history," Troy Tucker, head of Athletics, stated. "So much so that in response to the name change, we will no longer be the Spartans. We will now compete as the NAC Yaks. We're currently working with the Marketing Department to develop a new yak mascot."

The timing of the switch will coincide with the completion of NAC's newest residence hall. To celebrate, Mark Culp, director of facilities, has announced that the new dining hall will be named in honor of the College's name change.

"We've been kicking around some ideas. Yak Café has a certain ring to it, but some say it's a little off-putting for a dining establishment," Culp shared.

Dr. Susan Salvador, NAC's new vice president of Student Affairs, expressed some reservations to the plan. "I'm new to the area and the term NAC is unfamiliar to me. But then again, I have no idea what it means to 'get Yocco'd,' either."

Others have been more enthusiastic. "Go, Yaks!" Belinda Austin, associate dean of students, said.  "Plans are in the works for yak-themed parties at both Monroe and Bethlehem to celebrate. As a tribute, the Shadow Steppers Club is already working on a dance number called "The NAC Yak Attack."

Look for apparel and other items with the NAC name and new mascot in the College's bookstores soon.