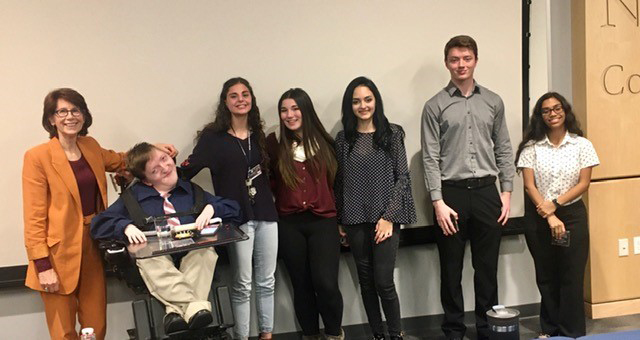 Northampton Community College (NCC) held its tenth annual speech contest finals on November 14.  Six students out of 44 contestants in the “speech playoffs” showcased their work on an enlightening array of topics.

“The fourth leading cause of unintentional death is choking,” said Paxton Svanda.  She discussed the Heimlich maneuver, invented by Dr. Henry Heimlich, which, since 1974, has saved thousands of lives.  Using two volunteers from the audience, she demonstrated how to dislodge an object from the windpipe; using a doll, she showed how the maneuver is done differently on an infant.  How can one tell that a person is choking?  Svanda listed the universal sign of crossed hands over the front of the neck, profuse coughing and blueness of the skin.

Victoria Rosenthal described the symptoms of sociopaths, people with antisocial personality disorder, who make up 1 percent of females and 3 percent of males in any given population: disregard for right and wrong, impulsivity, low threshold for boredom, and lack of empathy and remorse.  She gave as an example serial killer Ted Bundy, whose superficial appearance, for many years, “ruled him out” as the murderer of more than thirty victims.  “Not all sociopaths are violent,” Rosenthal pointed out.  Treatments, she explained, include psychotherapy for both the person with this mental illness and their families.

Looking for new adventure?  Matthew Taggart shared his enthusiasm for indoor rock climbing.  He talked about the functions and showed images of vital safety gear: rock climbing shoes, harnesses, chalk used to dry the hands, and the belay device, which regulates tension on ropes.  He also illustrated the figure eight knot.  “Rock climbing is dangerous,” he acknowledged, “but with the proper equipment, it is safe.”

Hailey Williams offered a glimpse into the unimaginably distant future by explaining black holes.  “Any particle in the universe can become a black hole,” she said.  These mysterious phenomena are places in space where gravity pulls so strongly that even light cannot escape. There are stellar and supermassive black holes.  Williams traced Hawking’s discovery to Albert Einstein’s Theory of General Relativity.  And what of the future?  She revealed that some scientists surmise that our galaxy and the Andromeda Galaxy will be sucked into black holes in one trillion years.  In 20 trillion years, it is theorized, the universe will consist almost entirely of black holes.  “Everything comes to an end,” she said, “including our universe into a black hole.”

Tyler French provided a general understanding, information about the future of treatment and the misconceptions surrounding arthrogryposis due to muscular dystrophy, a progressive weakness and loss of muscle mass occurring in one of 5,000 people.  “If this seems like an insignificant figure,” French said, “consider that ¼ of the world’s population have a disability.”  At present, surgery and physical therapy can mitigate some effects, but are not cures.  New drugs, now in clinical trials, show promise.  The real cure, French said, is in gene editing, actually removing the harmful genes, from a person’s genome.  This method lies in the future.  French named some misconceptions about muscular dystrophy: that it causes mental retardation, a shorter-than-average lifespan, and an inability to have sex.  French, who has arthrogryposis due to muscular dystrophy, advises people that “asking is always better than assuming.”

Maria Bartolucci extolled dogs for their remarkable ability to detect illness and help people through their powerful sense of smell.  “Dogs can detect one teaspoon of sugar in two Olympic-sized pools,” she said.  She detailed how dogs process odors by inhaling short bursts of air and directing them into their noses and on to their olfactory receptors, tens of thousands of times more acute than those of humans.  People shed sebaceous cells into the air; dogs trained to do so can detect small changes in human heart and metabolic rates.  They can recognize blood sugar levels in diabetics and can identify bladder, lung and skin cancers.  “Dogs and humans have shared 16,000 years of coexistence,” she said.  “That is a huge amount of time to hang around each other.”

Donna Acerra commended Jennifer Del Quadro for initiating the contest and continuing to nurture it for a decade.  There are eighty sections of Introduction to Communications classes running this fall.

The winners of the Fall 2019 Speech Contest are: