"We are a college of the community." 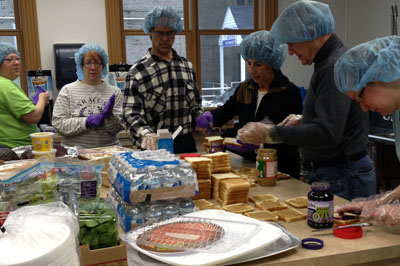 Community Engagement Classification.  The designation was based on evaluation of an extensive self-study documenting the nature and extent of Northampton's engagement with the communities it serves.

According to John Saltmarsh, director of NERCHE (the resource center that administers the classification process), the colleges on the list "are improving teaching and learning, producing research that makes a difference in communities and revitalizing their civic and academic missions."   Of the twenty-four colleges and universities in Pennsylvania that earned the designation, Northampton is the only community college.

This is the second time in two months that Northampton has received national recognition for its commitment to community service.

In December Deb Bohr, director of Northampton's Center for Civic Engagement, was notified that Northampton had been named to the President's Higher Education Community Service Honor Roll.  Described as "the highest federal recognition that colleges and universities can receive for community service, service-learning, and civic engagement," the Honor Roll is administered by the Corporation for National and Community Service in collaboration with the U.S. Department of Education and the U.S. Department of Housing and Urban Development, as well as the American Council on Education, Campus Compact, and the Interfaith Youth Core.

Northampton has been on the honor roll for eight consecutive years for "general community service."  This is the first year the College was also recognized in the "Economic Opportunity" category for addressing "the unmet needs of economically disadvantaged individuals, including financial literacy, affordable housing, and employment‐related assistance."  Northampton was also the only Pennsylvania community college on this list, joining the University of Pennsylvania, the University of Pittsburgh, Swarthmore College and Bryn Mawr College -- one of four colleges to receive top honors in "Economic Opportunity Community Service.

Northampton's president, Dr. Mark Erickson, said the College is proud to be on both lists.  "We are a college of the community," he said.  "That is a privilege and a responsibility we take very seriously."