They're living the dream! 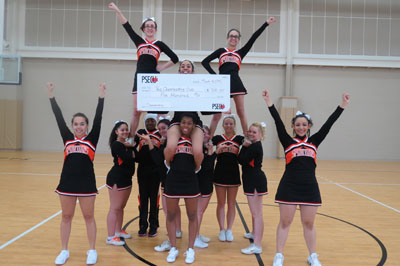 New team,
We're living the dream!
Taking over the scene
Of 2015,
We're Spartans!"

Even though it was grey, gloomy and the morning after yet another snowstorm on March 4, the gymnasium at the Monroe Campus was filled with lots of cheer, thanks to the new Monroe Campus Cheerleading Team. The reason for the revelry was the presentation to the team of a $500 check from the Pennsylvania State Employees Credit Union (PSECU). PSECU is open to students, faculty and staff. The credit union ran a promotion offering the prize to the club who had the most members join PSECU.

"The promotion was open to all clubs at the Bethlehem and Monroe campuses," Candice Richards, PSECU business advisor and e-center manager, said. "The Cheer Team beat everyone else and emerged as the winners. They are getting that $500 and I've heard they've already got big plans for it."

The fledgling team does have big plans. But that's been true since the team first formed in fall 2014.

"At the old campus, having a team was not plausible and I could not travel to join the Bethlehem team," student and cheer team founder Samantha Washington said. "With the new campus came greater opportunities. I emailed Tyrone Wright (student success physical fitness administrator) about starting a team and he offered his full support."

Washington has been cheering since she was five years old, but wanted to start the team not only for her own benefit and love of the sport, but to bring more Spartan spirit to Monroe.

Currently, the team has 12 members. "This team has great chemistry. Many of the girls did not cheer in high school or have never cheered at all. In a very short amount of time, they have learned collegiate skills," Washington explained.

Her teammate Samantha Marcano added, "It's really hard work but we love it!"

The team got to showcase their skills at a men's basketball match on February 12, complete with a Spirit Fest rally before the game to get the crowd fired up. It worked! The Spartans won 77-60 against Sussex.

Their future plans, which the prize money will help fund, include participating in competitions. The team will compete on March 14 at Delaware Valley College and on March 21 in Trenton, New Jersey.

"Our goal is to place at our competitions, but we mostly are just excited to get out in the community," Washington added. "I have never been on a team who works together and gets along like this. I'm so happy that the new cheerleading team stuck. Sometimes that doesn't happen. We hope that this program continues for many years to come."

The Cheer Team members are: 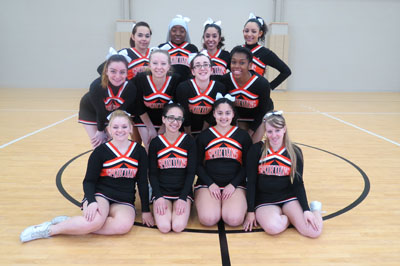