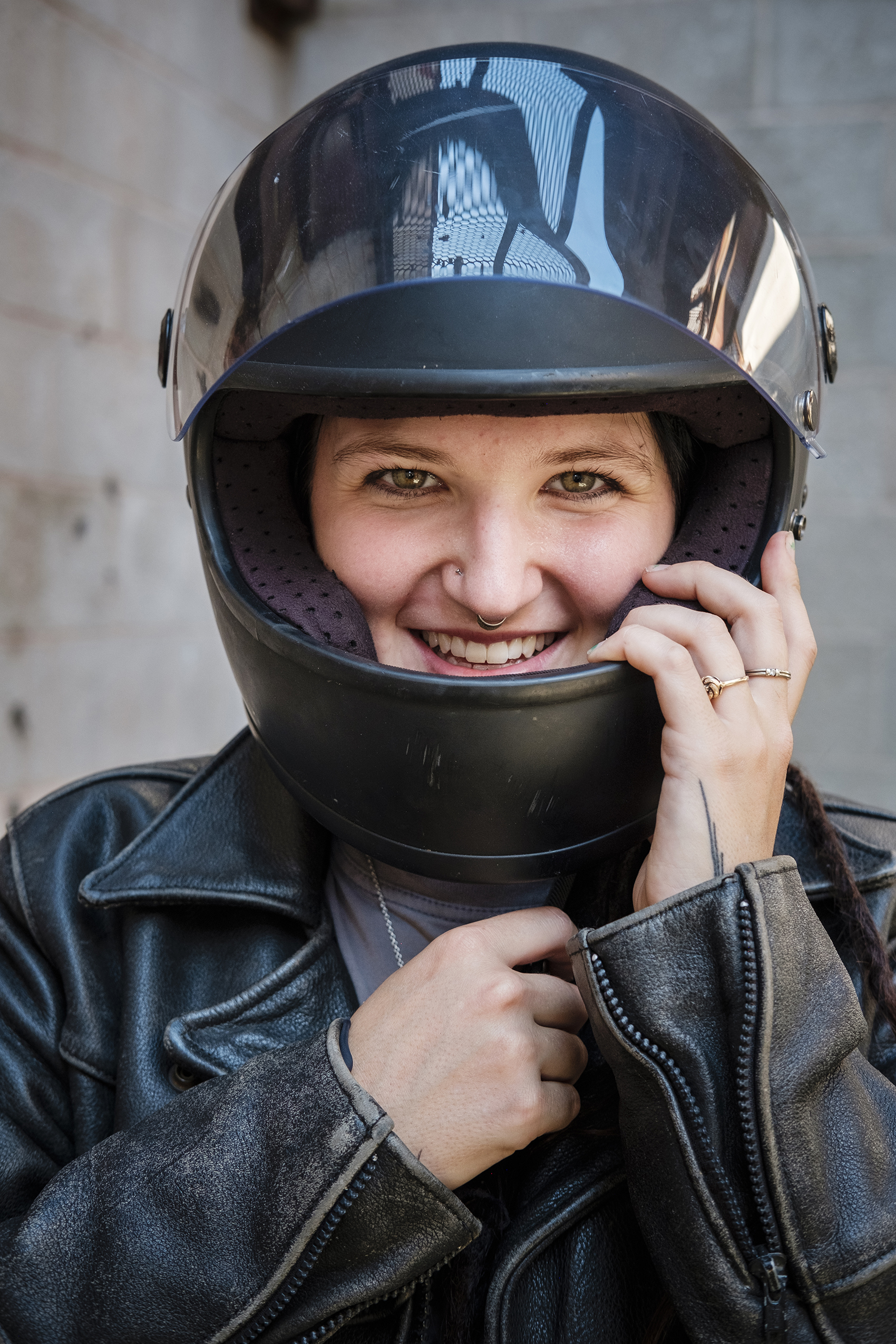 In the shadow of Guatemala’s Volcán de Agua, Chelsea Southard ‘11 checks the straps holding everything she owns on her heavily modified Suzuki DR650. She reads her compass, then follows the trail into the jungle where she’s building her largest architectural sculpture to date: a ceremonial sweat lodge.

After the piece is complete, she will say her goodbyes and ride on to her next adventure. Riding a motorcycle in tough terrain is nothing new for Southard, who made two solo treks across America several years before embarking on her current trip: a first-person adventure around the world. However, this isn’t just a trip.

Southard describes this as her odyssey, “an extended adventurous voyage, a long series of wanderings marked by many changes in fortune. The plan is to go all around the world, building art as I go, pillars to my adventure until one day I make it all the way around the globe.”

Her epic journey began in the summer of 2018. Southard packed her motorcycle and rode south, crossing the Mexican border at Ojinaga, about three hours east of El Paso, Texas, toward the hot deserts of Chihuahua.

Southard calls her odyssey Unus Mundus Project. Unus Mundus is Latin for “one world,” and it is “the platform on which I create, bringing together art, travel and exchange, synchronizing these elements into one world.” This synchronicity is a large part of Southard’s artistic philosophy. It includes growing a connection through shared experience, by building art and providing a platform for the world’s artisans to share craft and story, and to harness the power of collaboration.

Creative collaboration is the focus of Southard’s art and experience. “I never wanted to be an artist who locked themselves inside their studio. I want to live a creative life that allows me to connect with as many people as possible and create work from the inspiration I get along the way.”

One of her collaborative goals is to create a space where other artists can share their craft and stories through an online independent fair-trade marketplace.

After graduating from Northampton in 2011, the Bethlehem native earned her bachelor’s degree in electronic production and design from the Berklee College of Music in Boston. Her creative roots stem from her childhood, where she grew up handling tools and building things with her father, a lifelong carpenter. Her mother encouraged her to reach for new heights, no matter the risk. Southard has worked as a metal fabricator and an IT tech since her late teens.

“I learned how to design interactive audio systems with code that used real-life sensors and sculpture to create immersive environments of light and sound. I applied all of my past experiences with building and design and began to create art installations that brought together the physical and the ephemeral.”

This mixture of technology, sound and sculpture has created opportunities for Southard, with installations all around the country, including the Massachusetts Institute of Technology, Burning Man and Facebook/Instagram in Menlo Park, Calif. Through Unus Mundus Project, Southard is bringing all this experience with her on the road, creating new artwork as well as teaching others these techniques and learning new ones.

Southard’s travel companion is a modified 2003 Suzuki DR650 dual-sport motorcycle that she named “The Phoenix.” The bike is altered to fit all her traveling gear, which includes specialty luggage from Mosko Moto (a sponsor of hers), a tent, sleeping bag, pots and pans, a water purifier and every tool necessary to fix The Phoenix.

When asked why she prefers motorcycles, she said, “I process thoughts, feelings, emotions and dreams through its turning gears. What is going on within me translates into its metal. Never in my life have I ever been able to so directly observe what is going on inside my head. And with something that literally holds my life on its back.”

The Phoenix was stolen from her twice before embarking on her global journey. The first time while living in Oakland. The second while staying in Bethlehem two months before heading to the Mexican border. The Phoenix was found ruined after each recovery. Southard repaired the bike both times to working condition, thus earning the name.

Southard also has a Garmin satellite communicator and a smartphone. She uses Facebook, Instagram and YouTube to document and update her odyssey, as well as to keep in touch with family and the growing network of followers she makes along the way.

Southard is still in the early stages of her global adventure. She spent the first six months in Mexico, and then rode south to Guatemala. During those travels she made connections with artists and other riders while she immersed herself in as much of the local culture as she could.

“When people see me riding they want to know why, how, from where, and then they want me to come have dinner, meet their families, stay the week, live with them, never leave.” Between investing so much time with the people she meets, and putting her soul in the artwork and experiences they create together, it’s no wonder they consider her family.

When discussing her safety, Southard adds, “I do not travel with fear. I know if I do, I will attract it. The percentage of people that actually have ill intentions is very small. Most people just want to connect and are curious about others.”

This curiosity has allowed Southard to collaborate with a wide range of artists in Mexico City, take part in massive parades and spiritual celebrations in San Miguel, and learn the entire process of traditional weaving from a group of craftswomen in the backcountry of Veracruz. All these different artist and craft exchanges feed into the very goal of Southard’s philosophy of artistic collaboration and shared experiences.

Southard’s current installation includes creating an architectural sculpture in the mountains of Antigua, Guatemala. It will function as a Temazcal, a pre-Hispanic ceremonial sweat lodge. The materials involved include concrete, metal and glass. This is her first international work, and it has already stirred up interest from people in other countries in Central and South America who want to bring her talents to their cities.

THE LONG ROAD AHEAD

Prior to embarking on her latest odyssey, Southard went through a series of hardships that threatened her journey. Along with the two motorcycle thefts, she was in a serious accident that fractured her back. The responsible party denied any wrongdoing, and she was forced to halt her travel plans and take legal action to recoup medical expenses. Weeks before heading to Mexico, she got out of a very difficult relationship.

Despite these issues, Southard persisted in her goal. When asked about how this experience has changed her so far, she said, “When I left for this odyssey, I was in perhaps the worst place I have ever been in my life emotionally due to the trauma from my last relationship. I have relearned what it means to love myself, how to connect with others in this world and in what ways I feel called to contribute to it. We live in an incredible, fantastic, complicated, difficult, beautiful world. Together. And I believe I am here to help us all see that.”

In the coming months, Chelsea plans to ride through all of Central and South America to the very tip of Patagonia, the End of the World. She will then head west to Oceania and Asia. You can follow Chelsea’s journey on Facebook, Instagram and YouTube @unusmundusproject.