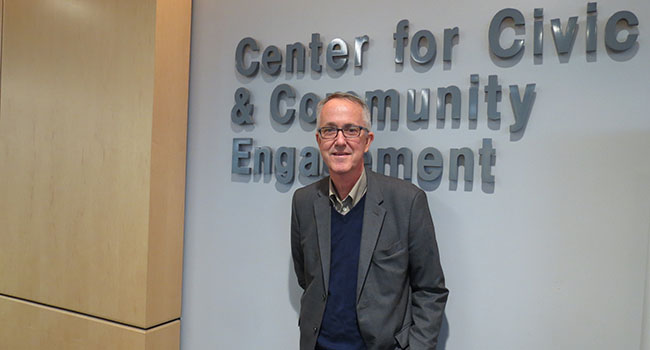 A roomful of students, faculty and administrators gathered in a circle at Northampton Community College’s (NCC) Center for Civic Engagement for a reflection session about using education and privilege to advance social justice.  Reflection sessions are held at the College throughout the semester and offer idea exchanges in an informal, safe-space setting.  Fred P. Rooney, an attorney, lifelong social justice advocate, Fulbright scholar, and chief executive officer of the Consortium for Access to Justice (7 West Morton Street, Bethlehem), facilitated the conversation on October 22.  His colleague Brian Rashid accompanied him and contributed to the discussion.

Founded by Rooney, The Consortium for Access to Justice, trains recently-graduated lawyers to start their own law firms that help marginalized people without access to money and influential connections to deal with housing, discrimination, consumer, immigration, and other issues.  Seventy law firms in the United States and the Dominican Republic have replicated this initiative.

During the session, Rooney focused on helping people worldwide by expanding one’s understanding through language learning and traveling.  He is fluent in Spanish, and his career has been based on his language skills.

Although he studied Spanish in college, his immersion occurred at age 19, on the streets of South Side Bethlehem, where he worked.  Noting that the Lehigh Valley, decades ago, had few Dominican or Colombian residents, he said that he is grateful to the Puerto Ricans of Bethlehem for their warmth and kindness toward him.

Whether it’s home, close to home or in another country, interactions with people is invaluable, Rooney said.  “What languages are you studying?” he asked students.  When a young man answered “French,” Rooney advised him to visit Haiti, France, or an African country where French is widely spoken.  “If you have an opportunity to go to another country, do it, and I promise you that your life will be enriched beyond measure,” he said.  Other opportunities to learn languages have come to Rooney through working with Spanish-speaking patients in hospice care.  He recommended practicing languages by volunteering at nursing homes, places where seniors have few people to talk to.  He also suggested finding organizations, such as the Peace Corps or English-teaching positions, on the Internet.

Acknowledging that he could have become a corporate lawyer with a high income, Rooney said he decided to devote himself to social injustice and inequity instead.  “If your heart tells you to use your education to do what you believe in, figure out a way to follow your heart,” he told students.  “You will be blessed beyond your imagination.  You will also enrich the lives of those you help.”

Rooney and Rashid answered as well as asked questions:  How do you adjust to an unfamiliar  place?” Answer: “You will always find people willing to help.  Ask people how you can help them.”

“Use your lives to foster love, peace and compassion,” Rooney concluded.

The reflection session was sponsored by the NCC Hispanic Caucus, Center for Civic Engagement, and Center for Innovation and Entrepreneurship.