Party on the Quad! 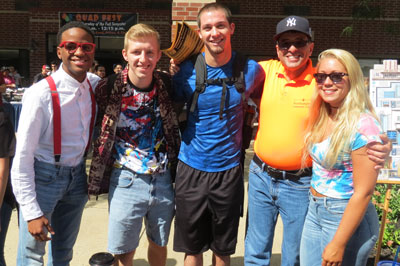 Every year, the biggest (and some say the best) party of the year is held to kick-off the start of the new academic year. Quadfest 2015 did not disappoint, with sunny skies and a breeze that kept dancers and zipliners cool! Party goers were invited to wear throwback styles from the 80s and 90s and the looks were totally rad.

Students feasted on hot dogs, popcorn, pretzels, and snow cones while they considered joining one (or more!) of  over 50 different NCC clubs and organizations. Community groups were also represented, offering volunteer and other opportunities for students.

The event offered a chance for brave students to try zip lining. The always popular dunk tank was also featured. Coach Yaguez and Vice President of Student Affairs Susan Salvador were just some of the brave staff to face the good aim and strong arms of students.

Quadfest kicked off with a parade followed by a jello-eating competition and plenty of music and dancing. The music was provided by NCC alumn DJ Stevie Blatz.

Relive all the fun in this photo gallery! And check out this video montage of the festivities.

The fun's not over yet. The Monroe Campus Welcome Back Party will be held on Thursday, September 10. More details to come soon!