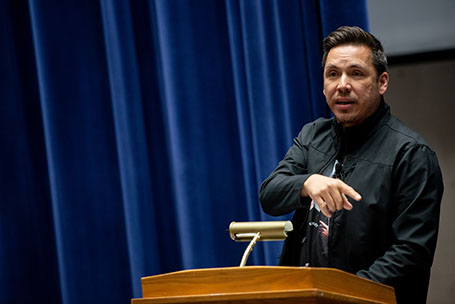 Nationally renowned poet Joaquín Zihuatanejo and his audience shared an hour of intensity at the Len Roberts Poetry Day at Northampton Community College (NCC) on April 4.  The annual event is held in memory of the beloved NCC professor and poet, who died in 2007.

Born in Dallas, Texas, to a Mexican family, Zihuatanejo grew up fatherless; his father left his mother soon after the poet’s birth.  A former high school teacher, the poet earned an MFA from the Institute of American Indian Arts in Sante Fe, New Mexico.  His work has been published in many journals and anthologies and has been broadcast on major television and radio stations and YouTube.  He has been named the City Champ of Dallas, after winning seven slam poetry contests in a row, and won the World Cup of Poetry Slam, in Paris.  He received the 2017 Anhinga Robert Dana Prize for his book, Arsonist.

Introducing Zihuatanejo, NCC professor Javier Avila compared him to Roberts.  “Like Joaquín Zihuatanejo, Len Roberts believed in the power of words and getting students to appreciate and love poetry,” he said.

To introduce himself, Zihuatanejo talked about his first name, Joaquín, selected by his grandfather.  “It is hard to live up to that name,” he said.  A legendary, but real, man, Joaquín Murieta led a band of Mexican revolutionaries in a struggle for justice in the 1840s and 50s.  Forced to watch his family murdered, Murieta was hanged by a mob in 1851.

With energy, power, drive, and humor, Zihuatanejo read from and discussed his newest book, Arsonist as well as some earlier poems. Themes of fatherlessness and Mexican-American identity feature prominently in his work.   While writing a sequence called “Causes of Degradation,” he asked himself how he felt as a young boy deserted by his father.  The answer was “degraded.”  He searched the word on the internet and found a long scientific report.  He took section titles from the report-- “Air Pollution,”  “Fires,” “Overexploitation,”  “Insects,” “Industrialization,” and others, working them into his poems.

While writing Arsonist he received a Facebook message: “You don’t know me, not really.  And I hate to tell you this, but my father—I mean our father-- has died.” Zihuatanejo used those twenty-three words as an epigraph to the book.  “The Breadth of Our Discontent” expresses his grief and anger after finding that his father’s obituary omitted any reference to him as a survivor.  What does survive, the poet writes, are “soiled sheets”…” “shortness of breath” … and “ ‘the song ‘I’m So Lonesome I Could Cry,’ ” coming out of a jukebox.

In “Signs,” he describes spending 9 ½ hours in Portland, Oregon, and seeing no people of color, although signs praising diversity abounded everywhere.  When he looked for a population count in a city directory, he found categories of “white” (74%), “Asian” and “black”, but none for Latino(a).   A category “other” suggested to the poet a casual dismissal of his ethnicity.

Zihuatanejo’s verse is vividly descriptive.  In “Nahui Oceltol” Zihuatanejo writes about wearing callousness “like the dirty t-shirts and torn jeans, because that was all we had.”

He uses highly original forms for his poems.  “This is a Suit” is written like a lawsuit against the United States to “represent the Chicano Nation in 1851, when the Western movement was sweeping over this land like a bad wave.” Another poem takes the shape of a letter to a school board.

The poet’s humor shows in his comment about his World Cup award.  He jokingly invited the audience to his home, where the actual cup is located, to eat guacamole from it.

Zihuatanejo had valuable advice for young poets.  He described the way he tacks earlier and later revisions of his poems to a wall.  These versions can come in handy as the poem takes shape.  “The third version may be included on the sixteenth,” he said.

To be a poet takes the courage of one’s convictions, he noted.  For a TED talk, he resisted producers who tried to censor him.  “Fight for your words, folks!” he said.

He talked about his experiences as a high school teacher.  One day, he asked his students to write and recite their haiku.  When a hearing-impaired boy recited his in sign language, Zihuatanejo learned it, too.

Finally, he told a story about a last day of high school class.  On those days, Zihuatanejo always shook hands and thanked each student for spending a year of their lives with him.  One large, brawny boy at the end of the line asked him “Why don’t you go be a poet?”

The reading ended with a passionate standing ovation from the audience, who eagerly bought his books until they sold out.

Later in the day, Zihuatanejo read on the Monroe Campus.