Saving the World, One Plant at a Time 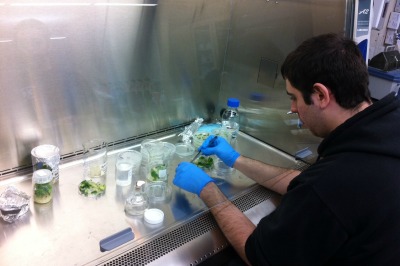 As a postdoctoral student in France, Dr. Beatriz Villar worked with other scientists on modifying the genetic composition of Eucalyptus plants so fewer chemicals would be needed in manufacturing paper.  Now -- in state-of-the-art labs on Northampton Community College's new Monroe Campus -- the biology professor is helping community college students master the sophisticated methodology central to that research.

Called "micropropagation," the science can be used in many ways, but Villar is most interested in its potential to save endangered plants, especially those that are native to Pennsylvania.   While they learn the techniques, the students are working with common and hardy plants.  They got mixed results in their first attempt to germinate cucumber, tomato and carrot seeds in petri dishes under sterile conditions.  The tomato seeds became contaminated and were eliminated from the experiment, but the carrots and cucumbers flourished.  With Villar's help, the students transferred the seedlings to jars and beakers. They are monitoring their development. When the plants are mature enough, the students will cut them into pieces and attempt to grow new plants from their roots, stems, leaves and nodes, testing different hormones to determine which are most promising for producing large numbers of healthy plants.

"This is not an easy process," Villar says. When the students become more proficient, they will work with more fragile species.

Although the project is still in its early stages, the students reported on their research at a meeting of the Lehigh Valley Ecology and Evolution Society on April 18.  Alex Green was one of the presenters.  He cannot believe his good fortune. 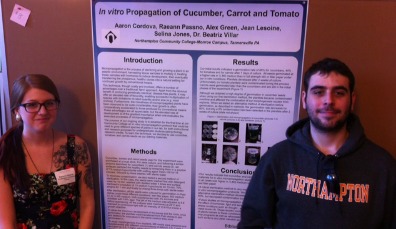 Green did well in the class. When it ended and Villar invited him to take on more advanced research, he jumped at the chance. So did two of his classmates, Aaron Cordova and Raeann Passno.

The students are devoting several hours a week to micropropagation and will continue to do so for the next year.  Like reptiles, plants need regular attention.  The "animal guy" doesn't mind.  "This is fascinating," he says.