They argued the pros and cons of voter ID laws

Members of Northampton Community College's Student Senate and the Phi Theta Kappa (PTK) honor society debated one of the hottest topics of the last few years: "Do We Need Voter ID Laws?" on February 26 on the Bethlehem Campus. 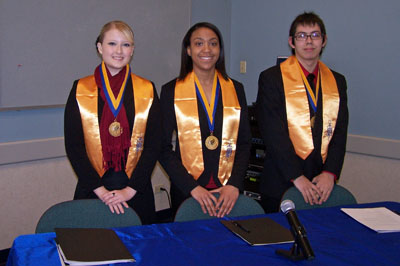 The students based their arguments on extensive research encompassing historical documents, statistics, studies, court cases, news accounts, and the quotes of prominent people.  The PTK team's stance favored voter ID laws, and the Student Senate's argued in opposition.  Chosen to represent a side through an arbitrary process, team members promoted views that did not necessarily match their personal opinions.

Following a three-round format, the debaters presented and bolstered their positions with the following points:

• Voter photo ID laws are necessary to preserve the integrity of the vote.

•Photo IDs are already needed to apply for government programs such as housing, financial assistance and food stamps.  Why not for voting, too?

•People who cannot furnish a photo ID can substitute a signed affidavit.

• Thirty-one out of fifty states have photo ID laws.

• The Supreme Court has ruled for voter ID laws in three court cases.

•Although smaller minority voter turnout was expected in Georgia after voter IDs were mandated, the African American vote actually increased.

•There have been cases of voter fraud, most prominently by an organization called ACORN.

• No matter how infrequently voting fraud is committed, it should not be ignored.

•Signatures can be forged on voting ledgers.

• Voter photo IDs are unnecessary. Voters already have to sign ledgers at the polls.

•They are a historical step backward. Numerous Constitutional amendments have steadily expanded the vote.  Voter ID laws reverse this trend.

• Citing extremely close elections, such as the 1960 election in which John F. Kennedy won over Richard Nixon by .01%, it is important to include all citizens in the vote.

• The cost of obtaining photo IDs, including travel expenses, can be prohibitive.

• The Voter ID controversy is partisan, with Republicans pushing a voter ID agenda in order to limit the ballots of those who tend to be Democratic.

•Voter fraud is a myth; since 2000, there have been only 31 documented cases of voter fraud.

The teams were judged on content, research and manner of presentation.  The judges praised both teams for a job well done.  They singled out for special 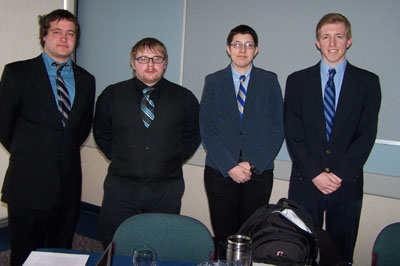 The event was sponsored by the NCC Martin Luther King, Jr. Committee and was a part of the College's celebration of Black History Month.