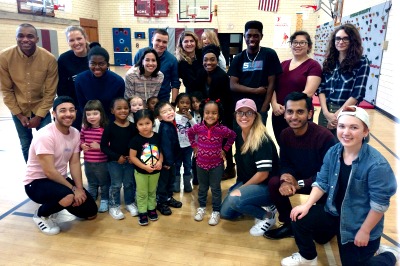 The Student Senate from Northampton Community College's Bethlehem Campus and Student Governance from the Monroe Campus met on Friday, January 13, for an all-day joint retreat.

The groups discussed various common goals -- one of which is better communication between the two.  Dean of Students Gloria Lopez announced to the group that the College will pilot a shuttle service between the three major campuses starting in Fall 2017. The shuttle service has been a joint goal of both Senates for the past several years.

Students then enjoyed a luncheon with Sedgwick Harris, the new VP of Student Affairs & Enrollment.

The day concluded with a trip to Pocono Family YMCA to volunteer, an activity that met the groups' common goal of community service.