Suicide Awareness and Prevention Explored through One-Man Play at NCC

Josh Rivedal performs “Kicking My Blue Jeans in the Butt” 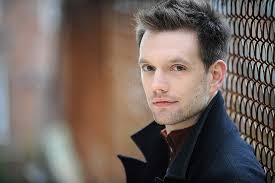 With lightning-fast humor, brilliant singing and portrayals of 18 different people —from a buttoned-up singing teacher to an inquisitive five-year old  —  multi-talented actor, international speaker, author, and playwright Josh Rivedal played eighteen characters from his life in his one-man performance, “Kicking My Blue Jeans in the Butt,” at Northampton Community College (NCC) on February 19.

While Rivedal evoked laughter with his quick wit and gift for imitation, the event and its performer had a serious mission: suicide awareness and prevention.

Raised in a cult-like, rigidly religious home, Rivedal’s curiosity and originality clashed with his father’s beliefs.  Religion melded with punishment, as Rivedal received a skin-splitting whipping from his father for accidentally flooding a neighbor’s yard.  Fire-and-brimstone lectures accompanied this and other beatings.  “Stop being weird,” “you have no talent,” his father told him.  At a Bible preschool, Rivedal’s first lesson was obedience to parents; in his play, he voiced his teacher’s slow, letter-by-letter instructions on how to spell this all-important word.

Ironically, Rivedal’s love of singing and acting originated with his father, who sang in church choirs, sometimes creating unconventional interpretations of church hymns.  Rivedal decided he wanted to become a singer and actor.  Rather than see him enroll in his high school drama club, however, his father insisted on the football team.  Secretly joining the drama club, Rivedal found solace playing the lead role in Grease.  “Everything bad in my life melted away,” he recalled. To his surprise, his father saw the show and shook his hand in congratulations.

Rivedal’s versatile gifts soon landed him leading roles in church school and public high school musical theatre productions and little theatre productions.  Meanwhile he supported himself by working in a shoe store, “helping women with bunions find suitable sneakers.”  Once he moved to New York, his career took off, from stints on Saturday Night Live to The Maury Povich Show to performances in Europe.

During this busy time, troubles surfaced back home.  Rivedal’s mother left his father, and his father fell into depression.  Shortly afterward, Rivedal answered his mother’s phone call: his father had been found dead in his bedroom, overdosed on pills.  His suicide note said “Sorry.  I had no choice.”

Beside his father’s coffin, Rivedal told his father he loved him and made a vow: he would never kill himself, although at times it was difficult for him to keep this promise.  Now, Rivedal devotes a major part of his life to countering his father’s hopelessness.  “Suicide is preventable,” he said.  “You can get help and give help.”

A major impediment to getting help, however, is the stigma attached to suicide, he said.  “People with suicidal thoughts are not bad, crazy or sinners,” Rivedal said, referring to societal misconceptions that keep suicidal people from reaching out. “No one is crazy.  We are all human.”

To remove the stigma, language is important, Rivedal pointed out.  The expression “committed suicide” perpetuates shame and connotes crime.  Instead, he said, it is preferable to say that a person “died by suicide.”

Another misconception is that suicide is limited to adults.  In fact, it is the second leading cause of death among people ages 10 to 33.  Often, a major life change is a catalyst.

How can we help prevent a suicide?  First, Rivedal said, one must recognize some subtly nuanced signs:

If you think someone might be suicidal, Rivedal said, the key to helping them is to talk with them in a non-judgmental way.  “Let the person know you are here for them.  Let them know that you see them, that you see what they are going through.  Listen with empathy and kindness.”

Rivedal talked about a related mental health topic, living with his own depression.  “Depression is treatable and manageable.”  He copes with his psychological ache through de-isolation, creativity, spirituality, anti-depression medication, counseling, and volunteering.

Help for depression and/or suicidal inclinations are readily available at Northampton Community College.  Dean of Student Success Eric Rosenthal described an NCC team-approach program called THRIVE, which promotes mental health awareness, wellness and stigma reduction.  “Even if you’re doing fine, you can always thrive,” he said.  To participate in this endeavor, contact Rosenthal at erosenthal@northamton.edu.

NCC will hold another talk about mental health on Tuesday, March 19, 3:30 p.m., at Lipkin Theatre, where you will meet Scott, a young man who faced mental health challenges.