A love story for Valentine's Day 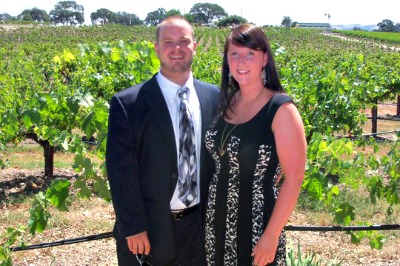 "It all started with a few innocent smiles between us in Donna Acerra's public speaking class in 2009, at Northampton Community College," says Colin Rambo '09. The applied anthropologist and tribal preservation officer for the Tejon Indian tribe in Bakersfield, California, met the "love of his life," Stephanie Smith, in this course.

The couple got to know each other through class interactions and hearing each other's speeches.  Drawn by his charismatic personality, humor and intelligence, Stephanie asked him out on a date.  "He was always friendly to everyone around him," she says.  "He is a real social bee, and I wanted to be his flower."  Impressed by Steph's courage and outgoingness, Colin accepted her offer.  But these qualities turned out to be just the tip of the iceberg, he adds.  "Steph is a smart, funny, hardworking, dedicated, loyal, trustworthy, compassionate, and just a genuinely wonderful human being overall -- quite possibly the most loving and nicest person I have ever known.  I'm a lucky guy!

"Our first night out started at my long-term place of employment, Ripper's Pub, in downtown Bethlehem; she stayed until my shift ended and hasn't left my side since!"

Meanwhile, in public speaking class, a perceptive Professor Acerra put two and two together when she caught Colin attempting to discreetly "return" some of Steph's jewelry that he "just happened to find."  "I will never forget the all-knowing look/smile of surprise/joy on her face when she saw this exchange," he says.

Stephanie and Colin share Lehigh Valley roots. Stephanie grew up, the middle of three sisters, in rural Williams Township.  Her parents still live in her childhood home and own two horses, seven chickens and two German shepherds. Colin was raised in Bethlehem, the older of two sons, in a family that included both sets of grandparents.

In addition to adoring each other, Colin and Steph love their careers.

Colin is an applied anthropologist who earned his associate degree in communications at NCC and a bachelor's degree in anthropology from California State University, Bakersfield (CSUB).  He began his professional career working as a field archaeologist in 2011.

Since 2014, he has been working for the federally recognized Tejon Indian Tribe as their tribal preservation officer, a cultural emissary whose mission is the preservation of tribal cultural resources such as sacred and archaeological sites, traditional hunting/fishing grounds and tribal practices. For example, as sovereign nations within another country, Native American tribal/spiritual leaders must be consulted whenever the California Department of Transportation ponders building a road that could transverse native land. "It is imperative that I maintain a continuous dialogue between the department and the tribe to ensure that I am implementing the tribe's wishes," Colin says.  He is also developing a mini-museum and a larger cultural center while pursuing a master's of arts degree in interdisciplinary studies at CSUB, with concentrations in public administration and applied anthropology.

The Tejon Indian tribe's aboriginal/ancestral lands are in south-central California, between the Tehachapi Mountains and the northwestern edge of the Mojave Desert.  They are the descendants of the Kitanemuk Indians, some of whom intermarried with members of several other tribes. The first reservation in Kern County, California, was established in their homelands. In order to become a tribal member, one must be able to trace his/her ancestral lineage to 19 individuals on a 1915 census.

Colin explains that it is very rare for a non-native Tejon to represent the tribe, a position considered a sacred duty, and that he is the first non-native employee to ever enjoy this honor.  He and tribe members have formed a warm, familial relationship.  "Seeing the smiles when I am successful in preserving something important for them inspires me," he says. "Knowing that I am doing something selfless with my career, something that REALLY is meaningful, is more fulfilling to me than making six figures could ever be."

Likewise, Stephanie works to preserve a heritage, an environmental one. After earning a bachelor's degree in environmental resource management from California State University, Stephanie started out as a utility forester for Davey Resource Group, a division of Davey Tree Expert Company.  In this position, she inspected electric power lines for vegetation clearance and helped the firm remain compliant with regulations for high power voltage lines. Her responsibilities have grown to include training new foresters, developing training online, specializing databases, creating a "Tree of the Month" guide, and running a community outreach program that she developed with Pacific Gas and Electric.  She earned a promotion in December 2016 as a hiring coordinator for the company's western region, while the regular coordinator is on maternity leave.

Whenever Colin and Steph visit Pennsylvania, they make sure to catch up with their favorite professors, Donna Acerra, Melissa Koberlein, Ken Burak, and Doug Heath (retired). "The professors literally reignited my passion for higher learning when I was 21," Steph says. "I owe them A LOT!" "NCC's sociology, psychology, philosophy, and especially my intercultural communications course, prepared me quite well for transferring to an anthropology program at California State University at Bakersfield," says Colin.

"And," he adds, "if it weren't for the affordable tuition at NCC, Steph and I may have never have met each other! Thanks, NCC!"