Casino Resort honored for its work with NCC

Whether the game is poker or blackjack, customers love to win at The Sands Casino Resort Bethlehem. 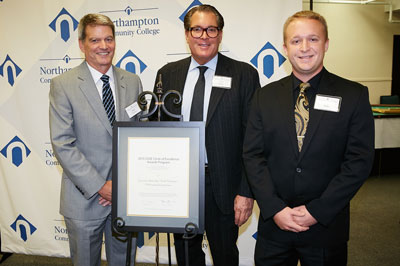 On October 21 the Sands won, and it wasn't by chance.

At a brief ceremony in the casino training center at Northampton Community College's Fowler Family Southside Center, the college president, Dr. Mark Erickson announced that the Sands and Northampton have been named the recipients of an award recognizing exemplary partnerships between community colleges and the private sector.

Winners are selected by a judging panel for the Council for Advancement and Support of Education, a non-profit organization whose membership includes more than 3,670 colleges and universities, independent schools and education-related organizations in 80 countries.

"I couldn't be prouder than to stand up here with Mark to celebrate this incredible partnership," Erickson said, speaking of Mark Juliano, the president of Sands Bethlehem.

Erickson explained that the award pays tribute to the work the Sands has done with NCC, the City of  Bethlehem, local economic development organizations and the people of South Bethlehem to transform what was once the largest brownfield site in the United States into a vibrant arts and entertainment center and to create jobs with family-sustaining wages.

It also speaks to the value of the Lehigh Valley Food & Wine Festival. The event draws thousands of people to the Southside each year and has raised more than a million dollars for Northampton while giving culinary arts and hospitality students the opportunity to gain experience working at a large public event with some of the leading restaurants in the region.

"Awards are always nice," Juliano responded, "but I look back to the experiences we have had with Northampton and that's what I'm most proud of. 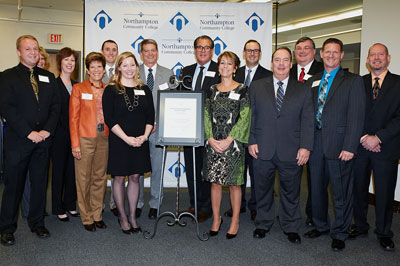 They've been able to provide us with something we desperately need and that's talent," he said.  "The Sands is full of grads from Northampton's culinary, hospitality and dealer training programs.  They come to us as interns and then move into the employee ranks.  We give them a reason to stay in an area that is slowly revitalizing itself with tons of great things to come."

One of those students spoke at the awards ceremony.  Tyler Baltz recalled that when he signed up for dealer training classes at Northampton in 2010 he was living at home, juggling three part-time jobs and had no health insurance.  "I knew it was time to move on," he said, expressing gratitude for the encouragement he received from Deb Driscole, program manager for NCC's table games training program.

He got hired by the Sands as soon as he completed the program.  He advanced to a supervisory position and now shares what he has learned with future dealers in the casino training center where he once was a student.

Erickson described Baltz as "living proof of the impact of the partnership."

The partnership, like the casino, creates lots of winners.

View more photos from this event in the photo gallery.