Celebrating a decade of student support

When Buddy V of TLC’s Cake Boss wheeled one of his over-the-top cakes onto the stage of the Sands Event Center, and world-renowned Chef Emeril Lagasse started jamming on the drums with the Craig Thatcher Band, it became apparent that this was a very special Food and Wine Festival.

The Lehigh Valley Food and Wine celebrated its 10th anniversary in Mardi Gras style, a party like no other!

The Lehigh Valley Food and Wine festival, held on May 31 through June 2 at the Bethlehem Sands Event Center, took attendees on a thrill ride for the palette.  Guests found themselves sampling fine spirits, wines from around the world, glasses of bubbly, and mouth-watering bites from the area's best restaurants.

Northampton Community College (NCC) has partnered with Bethlehem Sands and Southern Glazer’s Wine and Spirits since the festival’s inception, which began as a small, tented event in the Sands’ parking lot. 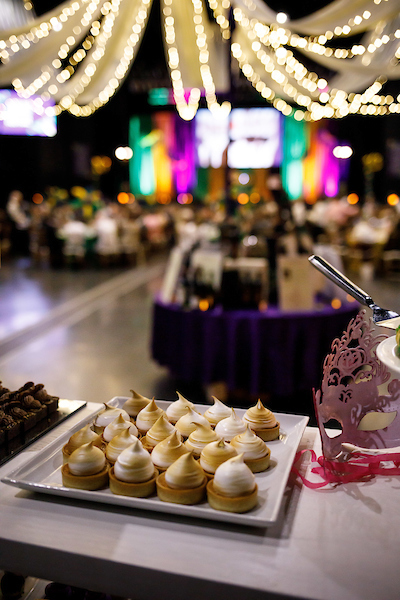 Tables of purple, gold and green feathered center pieces, larger than life Mardi Gras masks and vibrantly colored curtains, set the stage for the festival kick-off on May 31 in the Sands Event Center. The dinner, for festival sponsors, was a four-course meal prepared by longtime partner of the fest and owner of 11 restaurants, Chef Emeril Lagasse. Everyone was led to dinner with New Orleans style music by the Big Easy Easton Brass Band. The feast consisted of watermelon and heirloom tomato salad, orange glazed pork belly and sea scallop, roasted prime sirloin and an array of decadent desserts including a goat cheese beignet and sweet potato pie tartlets.

Mike Molewski, of CAPTRUST, and Mike Trageser, of the Sands, both co-chairs of the festival, talked about the impact the festival has had to-date, not only for raising the visibility of local restaurants, or the more than 30,000 guests who have enjoyed it over the years, but the impact it has on NCC students.

“We love to feature the culinary and hospitality programs at NCC and have them get involved during the festival," Molewski, founder of the festival, says. “What we were trying to do is engage the students with the community.” NCC culinary and hospitality students are paired with different restaurants to help as needed throughout the event, giving them first-hand experience working with some of the best chefs in the Lehigh Valley. They also worked under the direction of Chef Emeril Lagasse to prepare that evening’s meal.

Dr. Mark Erickson, NCC president, thanked all for their commitment to the festival. “There’s great wine, great food and great times, but it’s really all about the students. That’s what I get most excited about.”

Festival sponsorships benefit the NCC Foundation and help support student scholarships. By the end of the weekend, the festival officially met its goal of raising $2 million for scholarships in the ten years it has been running. A list of all of the fest’s generous sponsors can be found here.

At the dinner, Lagasse announced the winners of his externship experience in New Orleans for 2019. Students from the hospitality and culinary programs at NCC compete each year to earn a spot for an all-expenses paid externship to learn from Emeril and a variety of skilled chefs in New Orleans, Louisiana. They will work in four of Emeril Lagasse’s restaurants: NOLA, Emeril’s Delmonico, Meril and Emeril’s New Orleans. They also get the chance to work Emeril’s famed Boudin, Bourbon & Beer event at the Superdome and his foundation’s annual black-tie gala dinner, the Carnivale du Vin. Lagasse had a special surprise when he told the audience he would be taking all eight students who competed this year. The winners were:

"This year’s competition gave us some of the best we've had so far. Chef Francine, NCC’s director of culinary arts, and the students, instructors and support from all of you make it possible,” Lagasse said, "I don't know if people quite understand the caliber of students this college is turning out. It’s because of dedicated staff and people who care."

A live auction emceed by Daniel Roebuck, Bethlehem native and film star, capped off the night with items like rare wines, a custom Emeril Guitar by C.F. Martin, an Emeril’s New Orleans trip, and a VIP wine tasting trip to Sonoma Valley, raising an additional $115,000 for the NCC Foundation. 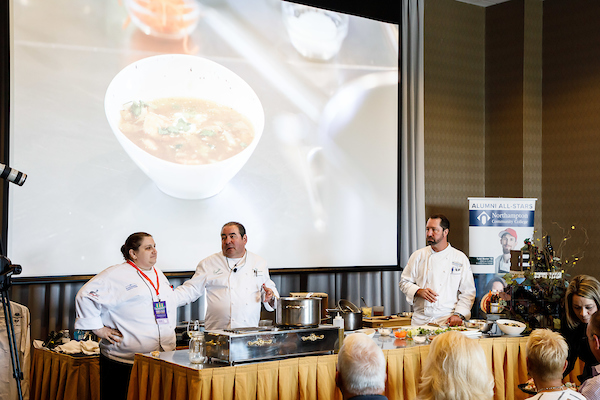 Chef Emeril Lagasse woke everyone up Saturday morning with a live demo in the Foundry Room of the Sands Hotel. All ticket proceeds for the demo went towards the New Orleans externship experience for NCC students. He cooked up Vietnamese Shrimp and Pork Spring Rolls with Nuoc Leo, a Vietnamese peanut sauce, Fettucine Nero with Nuoc Cham, a type of vinaigrette used in Vietnamese dishes as Lagasse explained, and Charred Chayote Soup with Adobo Shrimp.

“Because of the weather conditions in New Orleans, the Vietnamese fishing industry has taken over; so, there are now many Vietnamese restaurants that are fabulous in that area. My little girl also loves pad Thai. A few times a week, we do Thai or Asian cuisine in my house.'' Lagasse said, speaking to the inspiration behind the Asian cuisine.

The scent of garlic, butter and adobo spices filled the air as his pans sizzled and simmered, and the audience patiently waited to taste the dishes.

"Now is the time to taste and add seasoning if necessary. Your brain should tell you if you need more of anything. You can always add, but you can't take spice away,” Lagasse said as he ended the demonstration with a BAM!

THE GRAND TASTINGS WITH A SURPRISE GUEST 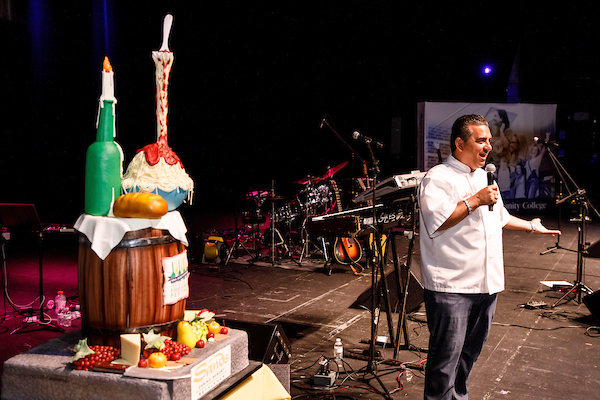 For the rest of Saturday and Sunday, guests enjoyed a variety of world class wines and food from regional restaurants, many coming with New Orleans style dishes. The Craig Thatcher Band played as the backdrop during the Grand Tasting in the Event Center with cocktails like a New Fashioned Slushie and reinvented Moscow Mule right outside its doors. In the Pork Tasting Masquerade Room as well as the Champagne and Spirits Tasting Room, attendees could explore even more that the festival had to offer. A beautiful outdoor beer garden gave guests a chance to enjoy the beautiful summer day as well as try Spiked Seltzer served by dazzling mermaids.

The restaurants that participated were:

Burgers and More by Emeril

Buddy Valastro, better known as Buddy V, owner of Buddy V’s Ristorante and Carlo’s Bakery at the Sands and star of Cake Boss, brought out a tenth anniversary cake to present during Saturday’s part of the fest. It was something reminiscent of what you’d see on a table in an Italian restaurant, a wine bottle, a taper candle and a floating spoon pulling up pasta from a bowl. “My family and I love the Lehigh Valley and this area. We visit all the time, and I am so happy to support this festival,” said Valastro.

He was joined on stage by Emeril, who stuck around after the cutting of the cake to rock out on the drums with the Craig Thatcher Band. Fest goers rushed to the stage, cell phones in hand, to capture the special moment.

Chris Wilson, chief culinary officer at Emeril’s Homebase, did a Saturday food and beverage pairing seminar and Shawn Doyle, chef and owner of Savory Grille, did his seminar on Sunday.

BEST OF THE FEST WINNERS 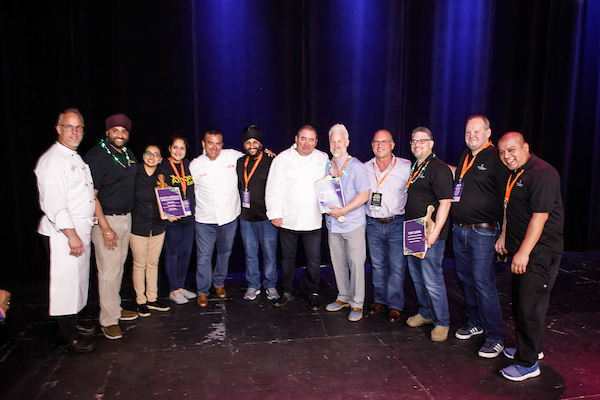 First, second and third place Best of the Fest winners were chosen on Saturday and Sunday for their crowd-pleasing selections. Winners received a trophy and a billboard announcing their restaurant as a Best of the Fest winner. Dishes were judged on categories like Taste, Balance of Flavor, Texture, Creativity, Presentation, Overall Technique and Portion.

We hope you’ll join us next year for the festival, but until then, check out all the Mardi Gras magic in this photo gallery.