Thinking about Immigration in a Different Way 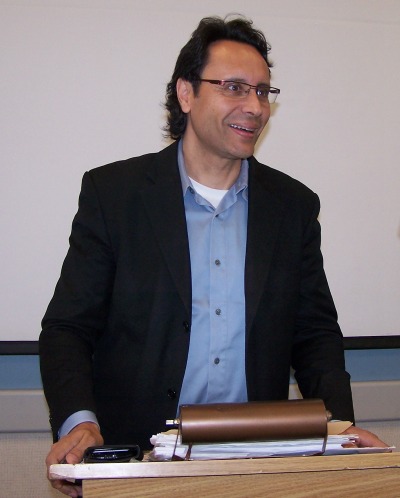 One late Christmas Eve in his native Spain, six-year-old Jesús Nebot answered a knock on the door.  There stood a woman nursing a baby and holding another child's hand.  The woman asked for  Jesús' parents, but both were away, attending midnight mass.  Curious, Jesús asked the woman, a Roma immigrant, why she had come.  "I have no money to feed my children," she replied.  The little boy reached into his pocket and gave her his first monetary gift from his father, a bill worth about $7.  Unwilling to take money from a child, the woman protested.  "It is my money, and I can do with it what I like," Nebot convinced her.  This incident of desperation and compassion has stayed with Nebot all his life, planting the seeds of his world view.

"At six, I had no preconceived ideas," he said.  "I had no political beliefs limiting me.  I only knew that with $7, this woman could buy milk for her children."

On March 31, Nebot, a filmmaker, social entrepreneur, speaker, trainer, and former undocumented worker, facilitated an exchange of ideas at Northampton Community College (NCC).  He urged his audience to think critically about immigration and to examine commonly held preconceived ideas.

In a highly interactive and dynamic give-and-take, he encouraged his listeners to transcend limited perceptions and relinquish judgements of other people, principles he teaches and lives by himself.

He began by redefining who is an immigrant. To many people's surprise, "immigrant" includes anyone born outside an area who settles in another one.  A New Yorker who moves to Pennsylvania, for example, is an immigrant. "We are a country of immigrants," Nebot said.

Nebot told his own story of leaving Spain during hard economic times and going to France, where he could pursue his goal of becoming an educator. For a year, he picked fruit for twelve hours a day to pay for school. He returned to Spain, intent on working toward a peaceful world, firm in his belief that the most powerful storytelling comes via film.

He showed a dramatic scene from his multi-award-winning film "No Turning Back," in which an undocumented Mexican immigrant fears for his daughter's future when he is sought by police after a traffic accident.

Nebot examined immigration from several perspectives.  From the legal perspective he had the audience react to the term "illegal alien." What does this language imply?  Participants in the talk said that it conjures images of crime and "otherness." Nebot pointed out that the 12 million undocumented immigrants (half of whom came with visas that they overstayed), are not violating the criminal code but rather the civil code.  Immigrants have fled to the United States in order to survive -- to provide basic life necessities for their children and themselves. Because it is nearly impossible for Mexican citizens to obtain visas, they do what they have to do, risking their lives crossing deserts, where 600 people a year die of starvation and thirst.  "These immigrants are in reality economic refugees," he said.

Nebot surveyed immigration through a historical lens.  The United States, he said, has welcomed immigrants mostly when it needed them, during wars that depleted the civilian population. Earlier immigrants built much of our infrastructure -- the railroads, the reservoirs, the tunnels. Now, immigrants are sought who have highly technical skills.

From a political perspective, Nebot said, our government responds to undocumented immigration in two ways: through a border patrol between the United States and Mexico and through deportation. "Yet," he said, "since the border wall was completed [in 2010], the price to taxpayers has tripled and the number of undocumented immigrants has doubled. Moreover, it is impossible to deport 12 million people and their absence hurts local economies that depend on their labor."

Nebot debunked some "facts" about undocumented immigrants as inaccurate:

"From a humanitarian point of view," Nebot said, "82 to 83 percent of undocumented workers come to the United States because of income inequality at home." He believes that the North American Free Trade Agreement, which eliminated tariffs and allows lobbyists to sell their products to Mexico more cheaply than Mexican farmers can, is the root cause of this inequity.

So, what are Nebot's solutions?  In condensed form they are: