Tracy Yatsko's ambition was college athletics. Then her dreams were shattered.

While growing up, Northampton Community College communications major and sports lover Tracy Yatsko dreamed of going to college on an athletic 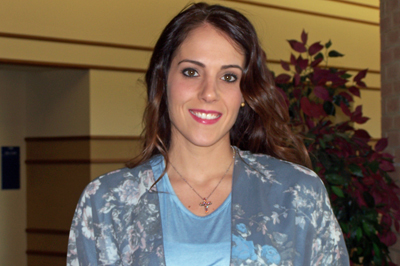 scholarship.  The recipient of athletic honors, her goal lay within reach.  But, in the space of one second, her life's plans shattered.  During a varsity basketball game in her junior year of high school, the 17-year-old collided with another girl, their heads hitting.  In pain and feeling unlike herself, she realized that she had sustained a concussion.  Nevertheless, Yatsko was unaware of the damage such an injury can cause.  She went on to play another game, collapsing this time on the court.  Her accident had resulted in a traumatic head injury.

Unable to attend school, she received homebound instruction from teachers at Tamaqua Area High School. By the last quarter of senior year, she felt well enough to re-enter the classroom, despite severe  headaches, fatigue and problems with memory.  After graduation, she started college but found it was too much for her at that time.

At age 25, knowing that NCC was affordable and that she would be gaining the equivalent of the first two years at a four-year school, she enrolled at the College.  Starting slowly, with one class per semester, she gradually built up to more classes until her course load reached fulltime.

Yatsko has been aided by her learning strategies.  "I put in overtime," she says, taking extra hours to study.  One device she finds especially helpful is to type her notes and read them over and over again.

NCC has been a highly positive experience for her.  "All of my professors have been excellent," she says.  "For the first time since the accident, I am really happy," she says.  "I am ecstatic to be in school."

In regards to her mostly younger classmates, she feels like a mother figure.  Her level of maturity and having gone through an extended trauma give her a perspective that she can share with students.  At the same time, she has the bonus of seeing college through her younger classmates' eyes.

Yatsko has done so well, that four 4-year colleges have accepted her.  In January, she is transferring to  Temple University, where she will major in media and communications to prepare for a career as a sportscaster.

"Sports is my passion," she says.  "I had my earlier goals ripped out of my hands.  Sportscasting is a way of reconnecting with what I love."  As part of her career, she hopes to interview other athletes who have triumphed over trauma.

Now fully recovered after nine years, Yatsko has returned to doing some sports herself.  She works out at a gym and participates in pickup basketball games.

One of her most compelling activities, however, is to raise awareness of traumatic head injury.  She shares her story with coaches at various schools and testified in support of Pennsylvania State Representative Tim Briggs's proposed legislation on concussion management.

She also has advice for student athletes.  "Concussions should always be taken seriously," she says.  "If you are hurt, be open about it."  She says that many students continue playing despite injuries because they are afraid of being removed from play.  As Yatsko learned, injury cannot be ignored.

As Yatsko  begins her studies at Temple University, she reflects on her time at NCC.  "I am thankful for NCC.  The College allowed me to 'get my feet wet,' to slowly build up to fulltime study and to continue my education at a university."