Troy Tucker, athletic director at Northampton Community College (NCC), has been named one of four junior/community college recipients of the Under Armour Athletic 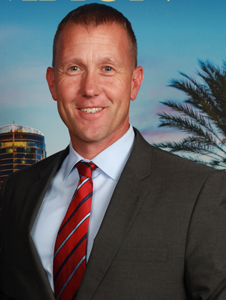 Tucker has overseen the renovation of several facilities, including a new softball complex and secured the bids for NCC to host national and Region XIX championships. He signed a deal to host the VIA All-Star Basketball Classic, which brings together the top high school seniors in the Lehigh Valley and the Poconos.

He is the Chairman of the Executive Committee of Region XIX, which oversees the operations of the 32 NJCAA member colleges and serves as the Chief Information Officer.  In addition, Tucker chairs the Division III Men's Basketball Committee, is the assistant chair of the Region XIX Standards and Ethics Committee and is a member of the baseball, lacrosse and championship events committees in addition to managing the operation of the Region's website. In October 2016, Tucker was honored with the Augie Eosso Award, the highest honor that can be bestowed upon an administrator, for his commitment and dedication to Region XIX.

Outside of Region XIX, Tucker serves as a member of the Executive Committee of the National Alliance of Two-Year College Athletic Administrators (NATYCAA), a position he has held since June 2008 and served as the inaugural President of the Eastern Pennsylvania Athletic Conference (EPAC) from March 1, 2012 thru February 29, 2016.  Tucker founded the conference and grew it to 15 members as of 2015-16.

Tucker is also involved with a number of other organizations, serving on the advisory board of College Athletics and the law and editorial board of Athletic Management, a leading publication for college and high school athletic administrators.  Tucker is a trustee for the Moore Township Athletic Association, is a member of the Notre Dame - Green Pond basketball booster club and serves on various committees with Via of the Lehigh Valley, a non-profit human service agency benefiting children and adults with disabilities. Tucker is also the founder and head coach of the Lehigh Valley Wolfpack boys' basketball AAU program.  Before coming to NCC, Tucker served as the associate director of athletics at the University of Maryland from 2004-2008. and director of athletics at Jamestown-Olean Community College (1992-96), D'Youville College (1996-99) and Herkimer County Community College (1999-2004).

A native of Scio, NY, Tucker began his collegiate career as an administrator at Jamestown-Olean Community College, where he initiated the college's athletic program.

Tucker is a 1991 graduate of SUNY Geneseo and a 1992 graduate of Springfield College, where he earned his master's degree in athletic administration.  Tucker resides in Danielsville, PA with his wife and three children.