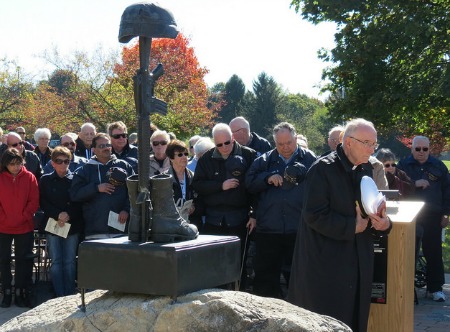 The USS Wadleigh (DD689), a Fletcher-Class Destroyer of the United States Navy, was launched on August 7, 1943, commissioned at the Boston Navy Yard on October 19, 1943, and decommissioned on June 28, 1962.  During these years, thousands of Navy members from midwestern and eastern states served on the ship.  About 25 shipmates, from as far away as North and South Carolina, along with their families and friends, attended the reunion at NCC. The camaraderie among participants, who wondered how much longer the group would be numerous enough to meet, showed itself in spirited conversation.

Following longstanding Navy tradition, members of the Air Force Junior ROTC at Louis E. Dieruff High School presented the colors after the sounding of a bell.  Likewise, they retired the colors to conclude the service.

Diana M. Holva of NCC's Student Veteran Services expressed her appreciation to NCC's Band of Brothers for initiating and expanding the Veterans Plaza and said she felt honored that the College could host the USS Wadleigh reunion. 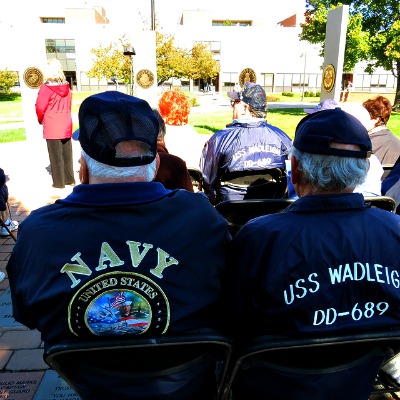 At a luncheon in the College Center, Michael J. Sparrow, U.S. Navy veteran 1993-2000 and director of the NCC Learning Center, made some remarks about the present, past and future.  He tied these time elements together by reminding the audience that 500 servicemen and women are discharged every day and urged earlier-discharged veterans to help those more recently released from duty.  "It is our responsibility to help these new civilians continue their service to their country as civic assets to their communities," he said.

The reunion and memorial service event was sponsored by NCC's Student Veterans Services. See more photos of the event in this gallery.