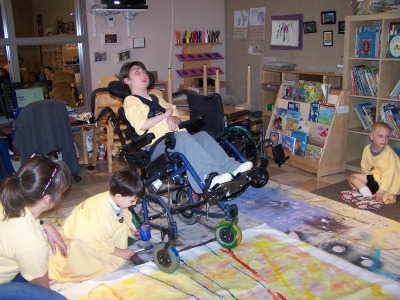 On April 19, preschool children at Northampton Community College's (NCC) Reibman Hall Children's Center wielded paintbrushes to color the chairs of a wheelchair red, blue, purple, and green.  Then they sat in the chair and steered it over a large piece of paper on the floor, creating a multicolored design.

The activity was the culmination of a 4-week project which served far-ranging purposes.  In the company of Mikayla Resh, a young woman with profound disabilities who takes art classes at the College, the children learned about people with disabilities through "Wheels of Friendship," a program in which Mikayla and her mother, Kimberly, travel to schools, engaging pupils with hands-on art projects.  Guided by their teachers and alongside Mikayla, schoolchildren, both with and without disabilities, create art together.

According to Denise Madzik, the coordinator of the Reibman Hall Children's Center at NCC, the project aligned perfectly with the Center's goals of promotion cross-cultural, language and academic development.  It also melds with the Center's signature educational program, Art as a Way of Learning.

On the website Mikayla's Voice, the value of projects like Wheels of Friendship is described as giving children "greater appreciation for and friendships with children with disabilities," building "understanding, compassion and acceptance, making us better human beings." 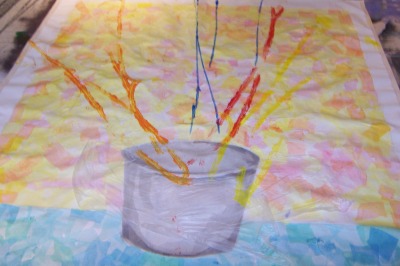 The Reibman Center children took to the project with enthusiasm.