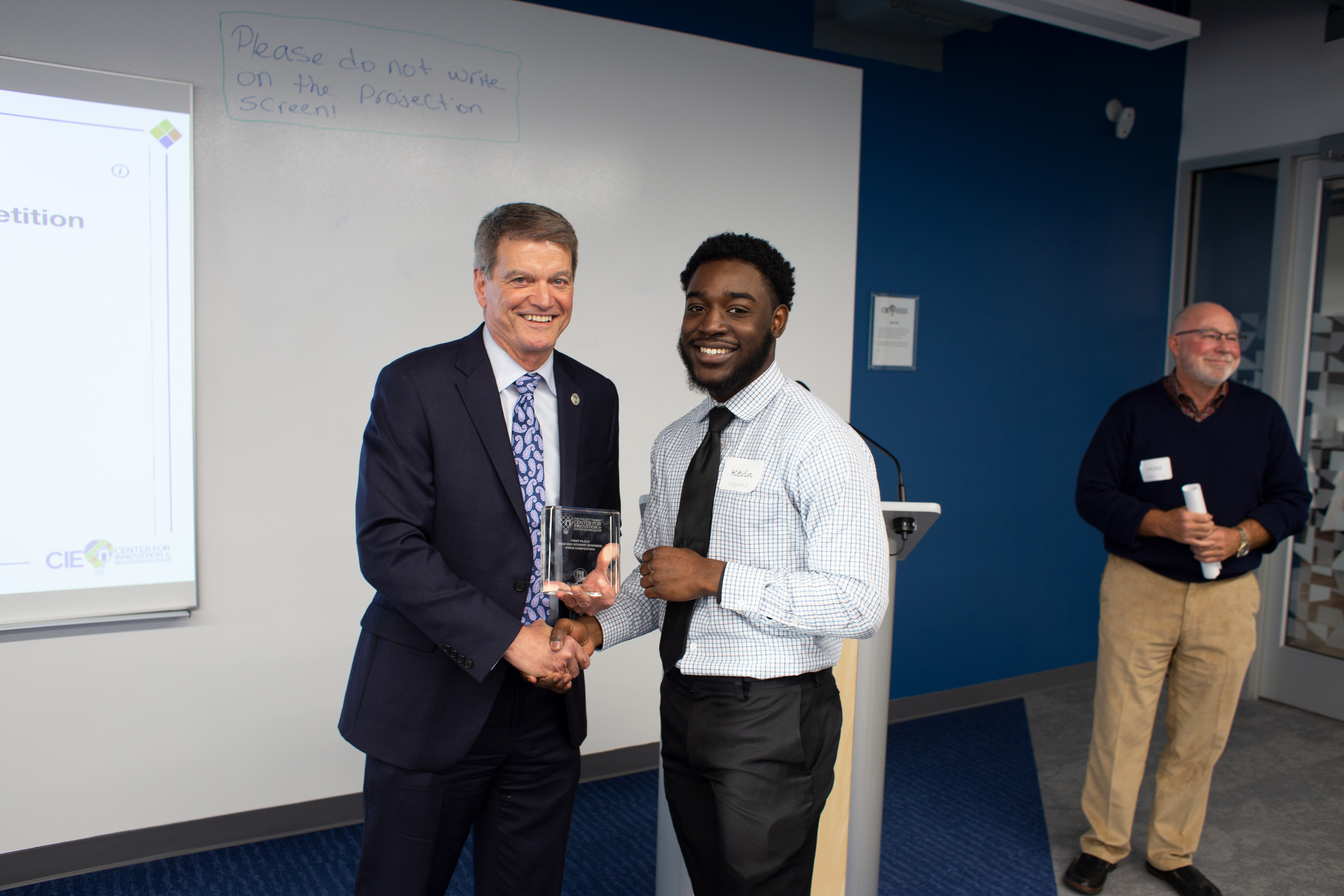 Legrand and eight other students who had participated in an eight-week entrepreneurial boot camp at CIE pitched their business ideas before a four-judge panel and an audience of about sixty supporters. The competition aims to prepare students to present their business ideas to potential investors.

“I was in shock, honestly,” said Legrand, who plans to use his winnings to develop an improved prototype for the charger that would function with older-model phones. He also intends to experiment with the shape of the prototype he developed in NCC’s Fab Lab. The Fab Lab is an entrepreneurial workspace in the Fowler Family Southside Center in Bethlehem.

Legrand’s proposed product, Tru-Air, would use Bluetooth technology to offer wireless charging for battery-powered devices. Tru Air would include software that would determine which devices are running lowest on power and charge them first. A Tru Air app would allow users to search the grid for publicly-available power. Supplemental boost pods would enable users to rev up their devices at a distance from the charger.

Legrand’s passion for his project impressed Mike Gausling, the judge who presented the awards.

“He was immediately credible,” said Gausling, of Originate Ventures.

The other judges were Heather Stenlake, Lesley Fallon and Matthew Sommerfield. Gausling and Fallon serve on the CIE advisory board. Stenlake is an inventor who appeared on the television show Shark Tank. Sommerfield is a design engineer at MTS Ventures in Allentown. 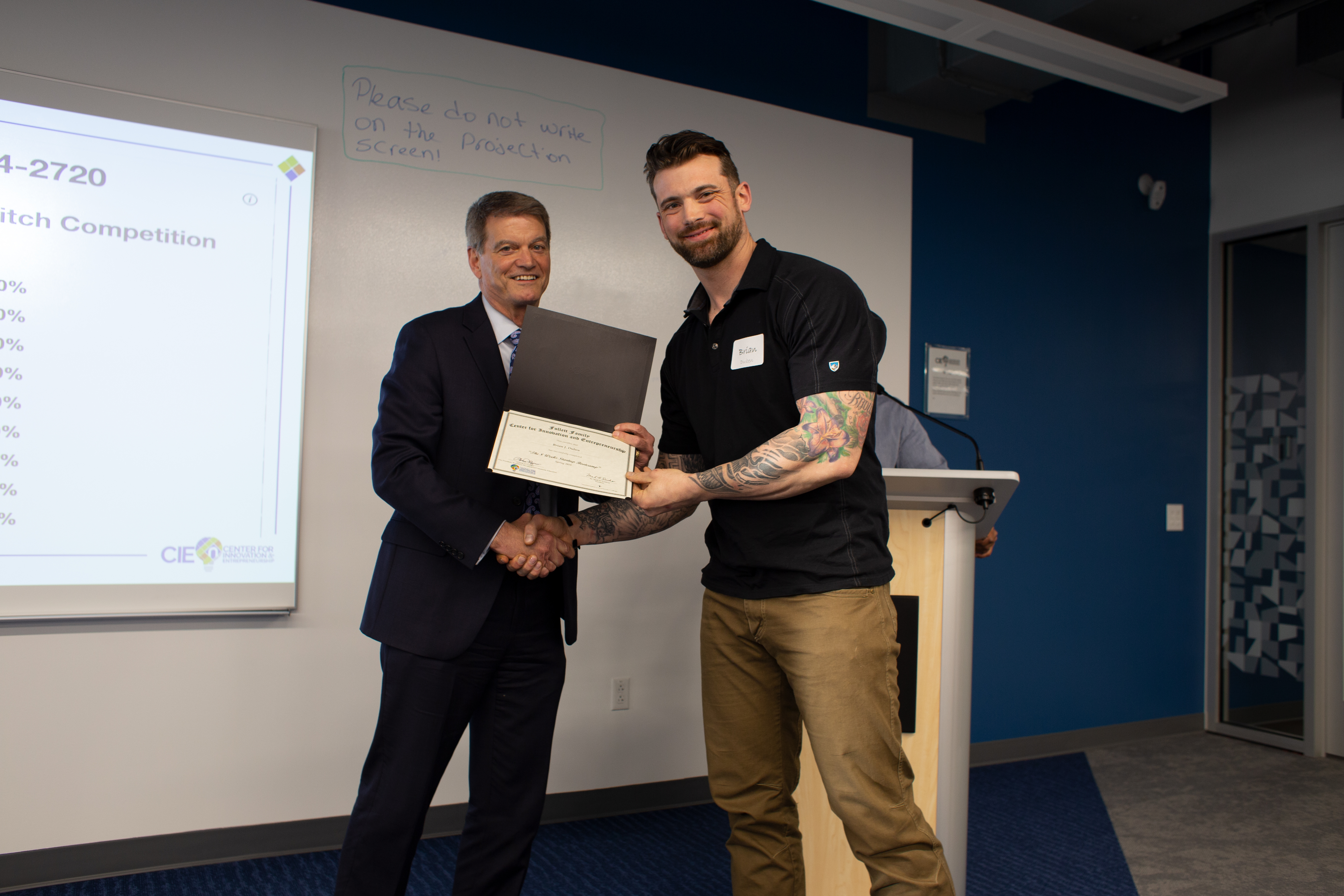 Duben noted that veterans suffering from depression or post-traumatic stress disorder might feel reluctant to seek traditional therapy. He offered metal fabrication lessons as a way vets could overcome trauma by engaging their minds and bodies, developing marketable skills, and finding purpose in civilian life. He plans to partner with the veterans’ charity Wounded Warrior Project to offer his services to struggling service members. He would also like to have graduates of his training program install railings for Habitat for Humanity.  Duben, who has taught welding professionally and now works as a welder at Soul Customs in Pen Argyl, plans to strengthen other veterans by drawing on his experience of adjusting to life after service in Iraq and combat in Afghanistan.

“We all have one thing in common and that is the hardest thing we’ve ever endured,” Duben said.

Other competitors presented business ideas that included a pen that would use invisible ink to help women apply eyeliner and a non-profit that would encourage Ghanaian teens to volunteer in their country. One student proposed an app-based driving school and another suggested a comic book-themed restaurant. A competitor pitched an online clothing donation system. Another participant planned a t-shirt company featuring African textiles. A student proposed expanding her existing Tiny Home vacation-rental business. 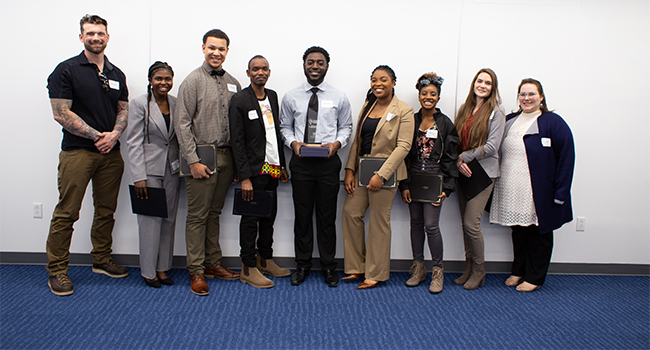 CIE Director Raja Bhattacharya urged all the participants to feel confident in their presentation abilities and to continue developing their business ideas.

The names of the other students who competed in the pitch competition are: Jill Suda, Angela Boasiako, Carter McKinney, Alisha Dennis, Amadou Camara, Nevy Harris, and Joan Avornu.