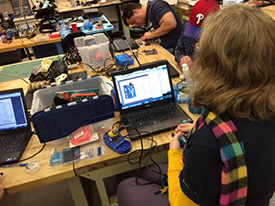 Vice President of Community Education Paul Pierpoint knew a good idea when he heard it: create an informal space where engineer, retiree, entrepreneur, artisan ... anyone could access state-of-the-art equipment and expert instruction that promotes innovation. Southside serial entrepreneur Shahri Naghshineh had given him a copy of Neil Gershenfeld's book, "Fab Lab," where the MIT professor and author described a low-cost facility that allowed people to "build things they need using digital and analog tools." Inspired, Pierpoint went immediately to work manufacturing Northampton's version of the concept at the college's Fowler Family Southside Center. Thanks to a generous donation from Shahri, the doors to innovation opened in 2009.

Three years later, recently retired entrepreneur Jeffrey Boerner discovered Northampton's Fab Lab and was an immediate fan. He'd seen a tremendous void in basic manufacturing skills over the course of his career and believed strongly that advanced technologies could not exist without this foundation. With this in mind, he began to support its mission, and in short order, his part-time interest soon became a full-time job as program director.

Since then, the Lab has grown from three to over twenty instructors and six to over eighty courses. Through support from the college, grants and community, it now includes 3D printers, laser engraving, woodworking, guitar building, metalworking, electronics and audio.

As impressive as the growth and the technology within the facility is, the quality of its instructors, a self-motivated group of master craftsmen and highly degreed individuals fuels the fires of the NCC Fab Lab. Most asked to teach at the Lab simply to share their talents in one of the best fabrication facilities in the country.

"We are breaking new ground," said Boerner. "The Fab Lab is a place where anyone can attain the high-tech knowledge and/or basic skills to fabricate just about anything. We work hard to ensure that the Lab is accessible and affordable to all. We want the Fab Lab to be a great place to relax, enjoy, explore new opportunities and occupations ... and grow."