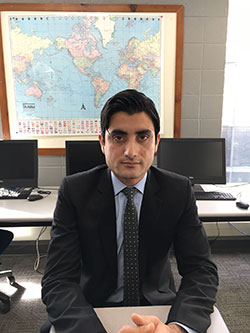 It is impossible to contemplate and discuss Adnan's career and educational goals without fully understanding the uncertain and tumultuous state of current events at his home. "There is always violence. There are various groups of terrorists committing acts of violence against groups of people at any time.  There is always a risk of another attack."  In his perspective, even making the choice to come to the United States to improve his education was a dangerous one, "The fact that I am receiving a western education increases the likelihood that I will become a target of violence."  Despite this fact, Adnan has made the courageous choice to advance his own skill and knowledge in his field in the hope of being able to serve others.

After completing his preparatory education, Adnan made the decision that he wanted to work as an EMT in his home country of Pakistan.   To do so, he attended the Government Post Graduate College - Mardan in KPK Province.  He attributes his interest and success in his chosen field to his natural inclination to want to help others, "It (helping others) is always something that I wanted to do.  Initially, I was very interested in pursuing other medical fields, but ended up as an EMT.  Even though it is not what I had initially planned on, I like that it gives me the opportunity to help others in the moments that they need it most."   Adnan was motivated to apply to the Community College Initiative Program due to a drive to improve his knowledge and ability in his field. He feels as though the education he is receiving here will compliment what he has received prior to coming, "In Pakistan, our education is very technically focused," Adnan described, "We are taught how to treat certain injuries in the short-term, and that is it.  Here at NCC I am learning more about the theoretical and administrative side of emergency response.  I am confident that this will help me in doing my job better when I go home."  In addition to his classes, Adnan is looking forward to an internship experience with the Bethlehem Township Fire Department in the coming months.

In addition to the academic and professional education he is completing, this journey has afforded him an opportunity to learn more about western culture and the American approach to a collegiate education.  Adnan applied for the scholarship in 2015 and was selected out of a pool of over 1,000 candidates.  Following his application and interview process, Adnan had to quickly prepare and make his way to Northampton in July of this year with limited knowledge of the language or culture.  Fortunately, his experience was a positive one, "In Pakistan, I had some negative perceptions about American people," but these were quickly dissolved after being in the country for only a short period of time, "After we landed in the Chicago airport, myself with some other international students were having a difficult time determining what we should do next.  As soon it became clear to those around us that we needed help, a stranger came up to me and helped me to get where I was supposed to be going.  I did not think anything like that would happen."  When asked about what other things surprised him about his journey so far, he explained the biggest surprises have come in the culture of the classroom, "In Pakistan, there are strict rules on not eating and drinking in class, and punctuality seems to be less important here."  Even though the classroom setting might be less formal than what he is used to, he very much enjoys the college experience at Northampton, "The constant homework and tests are helping me to understand the information better," he adds, "I also value the amount of supportive services that are offered to the students here."  Despite these feelings of positivity, Adnan is focused on completing the program and returning home to get a job; which will not be as simple as it sounds.

Adnan describes the professional situation ahead of him, "Finding a job in Pakistan is very difficult.  There are a lot of people who are qualified to work, but there are not enough jobs for everyone.  If you do get a position, the job security is good; you aren't likely to lose it."  When asked about the job searching process, he revealed that simply being qualified and able is often not enough, "The lack of jobs means that people are willing to do more to get them.  It is common for people to pay an employer to hire them."  Despite these potential challenges, Adnan is confident that he will be able to get a job through which he will be able to achieve his ultimate goal - to help the people in his community.