The honors program at Northampton Community College (NCC) has grown substantially since its introduction eleven years ago.  Not only has the number of students 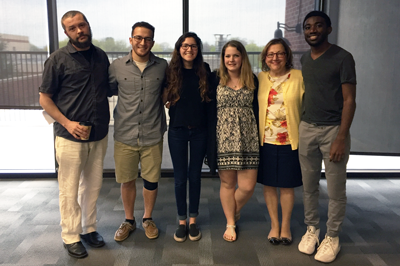 enrolled climbed from 27 to 320 on both the Bethlehem and Monroe campuses, but the breadth of the program has expanded to include explorations outside of the classroom.  For instance, during this academic year, honors students visited the National Museum of African American History and Culture, took part in a trail cleanup, and viewed a filmed Shakespearean play at Bethlehem's SteelStacks.

A panel of honors political science students, Morgan Contoleon, Dans Fils-Aime, Armando Gonzalez, Corey Trumbower, and Kristen Negrete, took an in-depth view into "Racial Injustice - Different, Not Diminished" by examining the 2016 film 13th.  Their research spanned the Thirteenth Amendment, which outlawed slavery but allowed forced labor as a punishment for convicted prisoners, to the "high school-to-prison pipeline," in which a few private prison companies profit from full prisons.  The students also discussed The Birth of a Nation, the 1915 film that relaunched the Ku Klux Klan, the Great Migration of African Americans from the South to the North and West as refugees from racial terror, and the veiled and coded rhetoric of racism emerging during the Nixon Administration's "War on Drugs."

Dan Stephens and Nanci Carmona, from the English II honors class, delved into South African playwright Athol Fugard's anti-apartheid play Master Harold...and the Boys.  They included a brief biography of the man called the "conscience of his country," a person of Afrikaans (Dutch) descent, born to a father full of prejudice and a mother imbued with a sense of justice. Stephens and Carmona analyzed a scene from Master Harold...and the Boys that dramatizes the different perceptions of a middle-aged black man and a teenaged white boy.

In "Leadership Lessons from History", honors history I student Stacey-Ann Downes critiqued Jefferson Davis's flawed leadership qualities.  A successful leader, she said, possesses intelligence, relatability, compassion, convictions, and the ability to elicit respect.  In contrast, she pointed out, Davis was impatient with disagreement, overly influenced by personal friendships, focused on minutiae, and unable to command esteem.

Honors history II student Tara Quinlivan presented a complex picture of Hawaiian Queen Liliuokalani.  She reviewed two historians' contrasting views of her role in the American annexation of the islands.  Quinlivan concluded that the queen was a strong woman who used deft maneuvers to successfully handle two crises - an epidemic of smallpox and a dangerous lava flow.   Liliuokalani also composed music, sought her own education and employed her abilities during difficult times.

Honors Irish Literature student Elias Rojas and honors student Sara Reichard talked about "The Democracy of Stories" and their participation in writer Colum McCann's Narrative 4, a storytelling project promoting empathy.  They described how Narrative 4 works, by having people relate their experiences to another person, and then having the listener retell the story, focusing on emotion rather than facts alone.  Empathy, they said, is a way of being creating unity among all.

Lori Bloch introduced two videotaped performances of Shakespearean plays by honors Shakespeare students on the Monroe Campus. One film, a tongue-in-cheek interpretation of The Taming of the Shrew, featured characters in modern dress speaking modern American English.  The other film showed a segment from A Midsummer's Night Dream, with students in contemporary attire using Shakespearean English.

Honors Psychology 101 students showed a video capturing a day in their lives hour by hour.  For one student the day started at 7:30 a.m., with waking up her sleepy four-year-old.  Another student confided in another student and exercised to reduce stress at 8:00 in the morning.  At 8:30 a.m., a student concentrated on the decisions she makes, consciously and unconsciously.

To qualify for the honors program, a student must have a minimum 3.5 high school GPA (on a 4.0 scale), have graduated in the top 20% of their high school class, have a 3.5 college GPA after 12 credits (in transfer courses only) or obtain a recommendation from someone familiar with their academic abilities.  All candidates must be taking 12 credits, have an interview with the coordinator of the program, complete an application and meet NCC placement requirements for English I.   Honors courses are offered in 11 majors.  For more information, visit the Honors Program page.