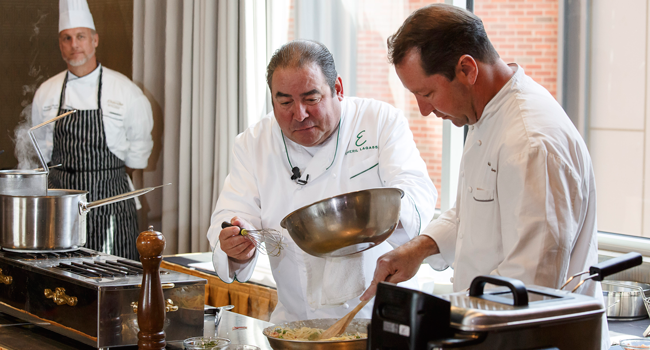 With unassuming gait, celebrity chef Emeril Lagasse entered the Foundry Room at the Sands Hotel, but as soon as  he got talking and cooking, the "BAM!" quality of his personality and culinary expertise flared, captivating his audience of culinary and hospitality students and members of the community.

Emeril's cooking demonstration kicked off the three-day Lehigh Valley Food and Wine Festival, from June 2 - 4.  Hosted by the Sands Bethlehem, in partnership with Southern Glazer's Wine & Spirits, the festival features multiple restaurants, vineyards and distilleries that offer samples of their wares throughout the Sands Event Center.  Sponsorship proceeds from the event go to the Northampton Community College (NCC) Foundation, which provides scholarships to students throughout the region.

"Cooking is a building process," Emeril said.  "You construct the dish from the ingredients, adding layers of amazing flavors," he said. "And, as in building a house, you must have a good foundation."

Everything Emeril does has a reason: He uses lemon or lime because their natural acidity "wakes up the flavor."  He removes and places lids on pots to effect evaporation or add liquid depending on the desired result.  Lids are removed when Emeril seeks evaporation and intensification of the tastes.

Grinding fresh pepper into the grouper chowder, he said, "there's a lot of love in there." 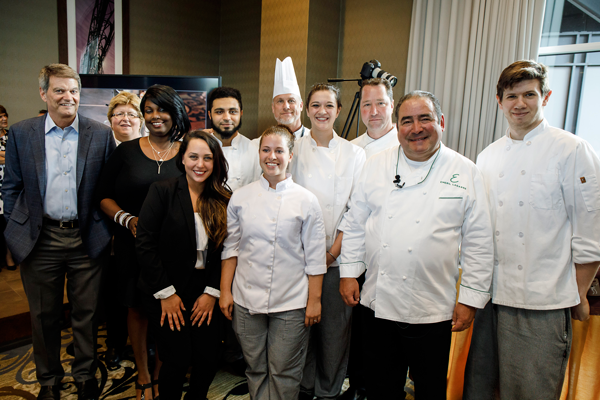 Clearly, Emeril loves passing on the art of cooking to new culinarians and hospitality providers.  He is dedicated to developing new talent as well as hiring many of the NCC program's graduates.  After the demo, Emeril announced the winners of the NCC culinary competition held this spring:

And the delicious prize?  An all-expenses-paid externship in New Orleans, cooking and working in one of Emeril's restaurants! Check out all the pictures in this photo gallery.

The next two days, more than three thousand people flocked to the Sands Event Center to sample food from some of the finest restaurants in the Lehigh Valley and experience fine wines, sumptuous spirits, and seminars and demonstrations. As they ate and drank, a lively soundtrack was provided by The Craig Thatcher Band. View all of the fun in this photo gallery.

"Congratulations to all of the people who helped make the 8th Annual Lehigh Valley Food and Wine Festival a spectacular event," Mark Juliano, president of Sands Bethlehem said. "It's become a signature event not only for the Lehigh Valley, but also very quickly becoming a signature event for food and wine festivals throughout the country.  The real magic of it is that it not only allows Sands Bethlehem to host an event for the community to enjoy, but also for the opportunities it creates for the culinary and hospitality students at NCC."

The festival annually raises about $250,000 a year for the Northampton Community College Foundation, which goes towards student scholarships, NCC President Dr. 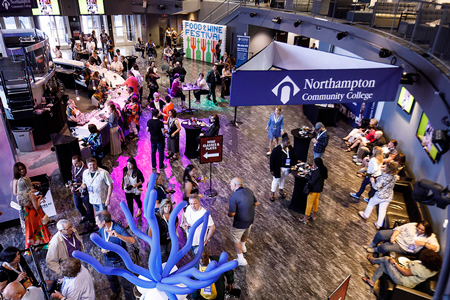 Mark Erickson said. "Scholarships that quite honestly change lives. We have great food, great wine, and a lot of fun that goes on at the festival. But there is more to it than that. It's also about our students. We love to get our students involved."

NCC culinary and hospitality students are paired with different restaurants to help as needed, giving them first-hand experience working with some of the best chefs in the Lehigh Valley. 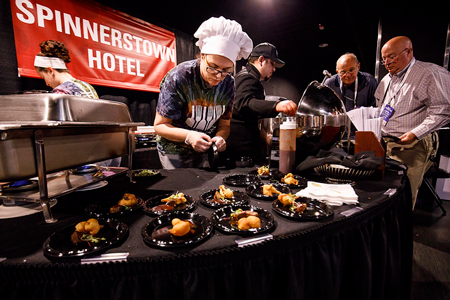 Demonstrations and Seminars by: 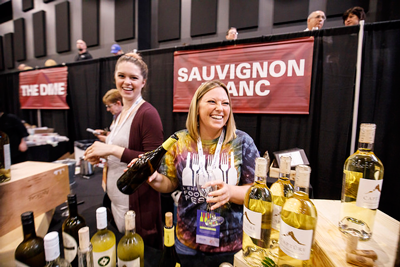 A very special thank you to the festival sponsors, without whom this event would not be possible.   View more Food & Wine pics in this photo gallery.

About the Lehigh Valley Food & Wine Festival
The Lehigh Valley Food & Wine Festival has grown from its humble beginnings as a one-day tented event to a full-weekend experience. The largest event of its kind in the region, the festival showcases cuisine from the area's top restaurants and wine from around the world to approximately 5,000 guests over two days. Hosted by Northampton Community College and the Sands Bethlehem, the Festival began in 2010 to provide hands-on experience to Northampton's Culinary and Hospitality Management students, raise money for the NCC Foundation, and celebrate the tantalizing dining experiences available in the Lehigh Valley.

About Northampton Community College
With an enduring commitment to the regional community it serves and a focus on student success, Northampton Community College has developed a reputation as  an institution of extraordinary distinction, earning accolades at the state and national levels for innovative programs, outstanding faculty and impressive student achievements. It counts among its successful alumni a 4-time Pulitzer Prize winner and an Academy Award winning director as well as a host of CEOs, presidents, and leaders of business and industry. Today, Northampton Community College has locations in  Bethlehem, Southside Bethlehem, and Monroe County, serving more than 30,000 students each year from 53 counties, 48 countries and 25 states.

About Sands Bethlehem
Sands Casino Resort Bethlehem opened May of 2009 in Eastern Pennsylvania. It is situated on the site of the historic Bethlehem Steel plant and located approximately 60 minutes from Philadelphia and the northern New Jersey suburbs and 90 minutes from New York City.  Sands Bethlehem offers over 3,000 state-of the-art slot machines and over 200 table games including a 30 table poker room, as well as a 282-room hotel and over 12,000 sq. ft. of meeting space. Culinary offerings include Buddy V's Ristorante, of TLC's Cake Boss, and three signature restaurants from celebrity chef Emeril Lagasse - Emeril's Chop House, Burgers And More by Emeril and Emeril's Fish House. The casino also features the Carnegie Deli, Chopstick Asian Cuisine, Steelworks Buffet & Grill, Croissanterie and the varied offerings and cuisines of The Market Gourmet Express. It is also home to the Coil Bar and Molten Lounge, which features live entertainment 7 nights a week. The Outlets at Sands Bethlehem launched at the property in November 2011.  The Sands Bethlehem Event Center, which opened at the property in May 2012 and includes over 14,000 sq. ft. of flexible multipurpose space, accommodates meetings, conventions and a variety of entertainment events.