Spice, flavor and the trinity 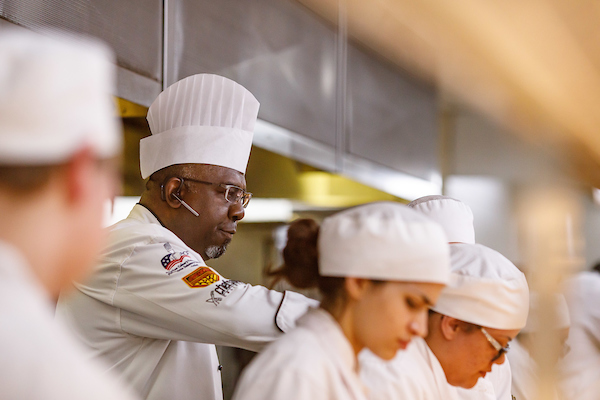 Taylor worked around the world in places like Italy, Japan and Germany, and through his travels, he found one thing was true. Everyone wants comfort foods like potato, rice, pasta, grits and more. So, in 1991, Taylor started Chefsoul Culinary.

The chef wanted to make the soul food he grew up with to comfort people, but he told the audience that soul food is not, as he put it, “a black thing or a white thing. Soul food is the thing that got people through struggle. Whether it’s Pasta Fagioli in Italian culture, or perogies in Polish culture, every culture has a comfort food.”

He studied at big names like Culinary Institute of America and Cornell, but Chef Taylor gives the most credit to his community college studies. Taylor attended Hudson County Community College, and he got individualized attention from chefs that cared about shaping and bettering their students on a personal level.

“When I got the opportunity to study and work in Disney, I saw that a good number of community college students were more qualified and retained more than those who attended larger colleges,” Taylor said.

While education brought Taylor his knowledge, his grandmother taught him how to really cook the soul food he grew up with and loved. He emphasized watching, helping and writing down what you see your family members do in the kitchen so you can learn from and reproduce it in the future. “I wanted to honor my parents, grandparents, my past and my heritage by making soul.”

The type of soul food Chef Keith Taylor brings to the people he serves consists of southern staples, deeply rooted in tradition. Rice is a staple of the low country, Georgia and South Carolina. So, the chef uses rice and other comfort foods from his culture, like grits, in many of his meals.

“Soul food is about simple, quality ingredients that are specific and made beautifully. Remember garbage in, garbage out. For instance, sausage isn’t just sausage. I need andouille or boudin sausage to make specific meals with the perfect flavor combination.”

The first dish the audience had the opportunity to taste was White Chicken Chili. “It has no beef, but just as much flavor from the spices,” said Taylor. The chicken is smoked and pulled off the thigh, the cannellini beans are added to a habanero broth, and the dish is topped with a cumin-scented crème and scallion. The heat of the dish hits later on the pallet.

The chef makes his dishes with contrasting elements. When he puts crunchy in a dish, he adds smooth. When he puts in cool flavors, he adds hot. He tells the audience the pallet loves contrast.

"Food is the center of life. It's in almost everything we do and every celebration. My food is part of that celebration."

Up next was Shrimp N’ Grits. Chef Taylor added what he called the “trinity of foods,” celery, peppers and onion, something used often in French Quarter and southern style cooking. This combination of the trinity, herbs and tomato base made the flavors of the cheesy grits and garlic sautéed shrimp pop in a unique way.

“I’m doing a shorter version of these dishes,” Taylor said as he demoed the last tasting, “but typically, these dishes are cooked slowly. I'm letting the chicken and sausage really cook and caramelize. Let the oil get hot before you add the rest of the ingredients to get that caramelization."

The chef emphasized leadership in the kitchen as he was cooking the last dish, Low Country Jambalaya. He told students that they should be leaders even if they aren’t a manager or a boss. “You’re part of an interdependent team in the kitchen. Being a leader means you're the first person to help the person at the station next to you, you’re learning and striving to be the best at what you do, and you share your knowledge. You have to practice cooking every day. A chef is only as good as his last meal,” said Taylor.

When the final sample was passed out to the audience, the andouille sausage and spiced creole tomato really did a number on the taste buds. With a base of the long grain rice, this dish lived up to its low country name.

Chef Taylor left the room with one final thought. “How many of you want to own a restaurant, catering business or food truck one day?” In response, the majority of students had their hands in the air. “The most important thing you could learn is a sound business model. It’s the key to being successful and being able to find a balance in your work. Have a B-HAG, a big hairy audacious goal. If that goal changes along the way, that’s okay. But, you have to aim for something you want, and go get it.”

To see more pictures from the event during the Chef-In-Residence program, click here.