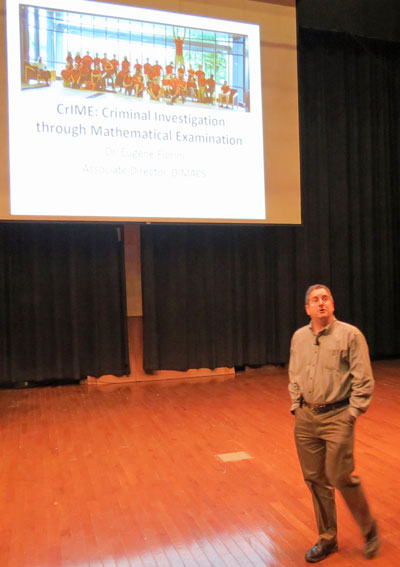 When it comes to using complex mathematics to analyze crime scene details, "even forensic scientists are afraid of it," says Dr. Eugene Fiorini. That's where DIMACS -- the Center for Discrete Mathematics and Theoretical Computer Science at Rutgers University -- comes in. Fiorini is associate director of DIMACS at Rutgers University. He spoke at Northampton Community College on April 23 in observance of Math Awareness Month. He described his presentation, "CrIME: Criminal Investigation through Mathematical Examination," as "not for the squeamish."

Broadly speaking, forensic science analyzes trace evidence left at the scene of a crime which may be used to either implicate or exonerate a suspect, or just to gain further insight into the incident. But Fiorini believes forensics is broader than that definition.

"I like to think of it as solving mysteries, and it's used in other disciplines such as paleontology, archaeology and anthropology." DIMACS is a consortium of 350 faculty members across various disciplines that does research and education on a variety of projects, including the forensics that Fiorino directs.

Using two cases as a backdrop, Dr. Fiorini examined some of the common applications of mathematics and statistics to forensic science. They were "The Case of Bees in the Bonnet" and "The Case of Maggots on Cocaine."  Both involved trying to determine an approximate time of death to either implicate or exonerate suspects, one with wasps that had built a nest in skeletal remains, and the other with fly larvae that had been feeding on cocaine left in the victim's nose. (Hey, you were warned it wasn't for the squeamish!) Both cases involved forensic entomology, and used the math discipline of statistics.

Throughout his presentation, Fiorino pointed out that, while everyone enjoys watching crime scene investigation shows on TV, solving crimes is never quite as easy as depicted in an hour. And, more often than not, in real life, it involves math!