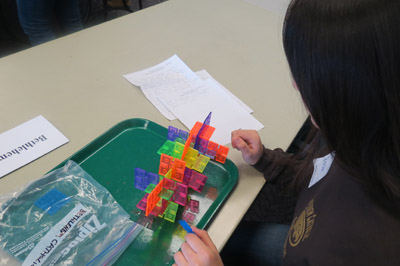 The Science Olympiad is a tournament of rigorous academic interscholastic competitions that consist of a series of individual and team events.

In Scrambler, students made a wheeled contraption they had to propel towards a wall without hitting obstacles in the way.  They were judged on the shortest time this took and the shortest distance the vehicle stopped from the wall.

At the chemistry lab, contestants wearing goggles  completed one or more tasks and answered questions about chemical processes focused on the areas or chemical reactions and kinetics. 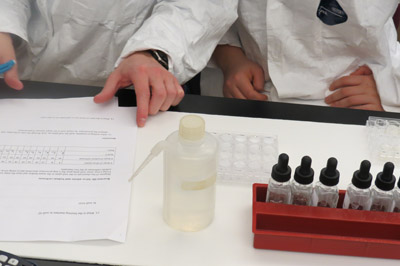 Competitors in Write It! Do It! worked in pairs: one student wrote instructions for creating a construction out of plastic squares.  Their partner had to then implement the directions to build the object.

The Wright Stuff consisted of students making gliders that would fly the greatest distances.

The day finished with an awards ceremony at which the winners were announced:
First place:  Stroudsburg
Second place:  Parkland
Third place:  Central Catholic

The event was coordinated by Dr. Charles Rinehimer, professor of physical sciences, with the participation of other faculty and staff members.

Visit the photo gallery for more photos from the Science Olympiad.