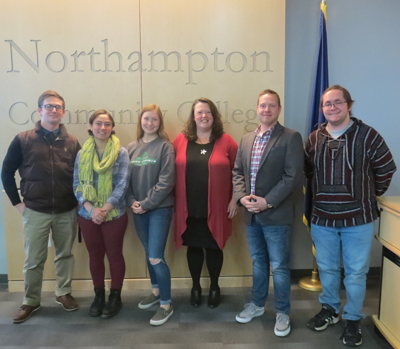 Five students from the Northampton Community College (NCC) honors program presented some of the finest work of the 2018-19 fall and spring semesters at the Thirteenth Annual Honors Program Student Conference on April 29.

Nicole Parisi presented her and Chris Youngken’s “Eire’s Exiles: A Podcast about (Irish) Immigration.”  Both are students in Dr. Cara McClintock-Walsh’s Honors Irish Literature class.  Their work explored anarchist movements, which challenged the status quo in labor and other areas, especially in early twentieth century America.

Laney Steele’s presentation, “The Power of (Wo)men,” done in Dr. Mary Mathis’s honors English I class, began with a riddle: “A father and son are in an accident, which only the son survives.  The surgeon refuses to operate on the son because ‘he is my son.’ ” First thoughts about this riddle assume that the son has two fathers, when in fact, the surgeon is his mother.  The puzzle illustrates common assumptions that surgeons, as well as people in occupations such as truck-driving, are male.  Steele showed how these preconceptions around gender are changing, across media, in society, politics, and the work world.  Earlier this month, Steele gave this presentation at the Northeast Regional Honors Council Conference, in Baltimore, Maryland.

Alex Allen, a student in Dr. Ken Burak’s ethics and moral problems philosophy class, challenged the notion of a “zero-sum game,” in which one only wins if someone else loses.  He invited the audience to participate in a partners’ game demonstrating that cooperation is more difficult than competition to achieve and is a process of mutuality.  “Conflict is at the root of society,” Allen said.  “But it doesn’t have to be.  Why can’t this be different?”

Adam Broggi, of McClintock Walsh’s honors Irish literature class, evoked the struggles of the Irish people, as they rose up against their oppressive British overlords, from the 12th century until the present.  In “A Man Doesn’t Have a Memory: History and Poetry of Eavan Boland,” he read one of Boland’s poems, interpreting her verse about visual reminders of British colonial rule and indifference to the Great Famine of the 1840s: roads leading nowhere, built by Irish laborers for pay, rather than the food the starving population needed and which Britain could have easily supplied.  His thesis was that art, such as poetry, is more effective at communicating experience than any statistics could be.

The Honors Advisory Panel consists of a group of dedicated faculty and staff members.  Dr. Cara McClintock-Walsh is the honors program coordinator.

Honors classes are available in 14 majors. For more information about the NCC honors program, visit the program page.